In Gov. Kemp's last COVID-19 press conference many staffers were standing shoulder-to-shoulder without any masks in sight. 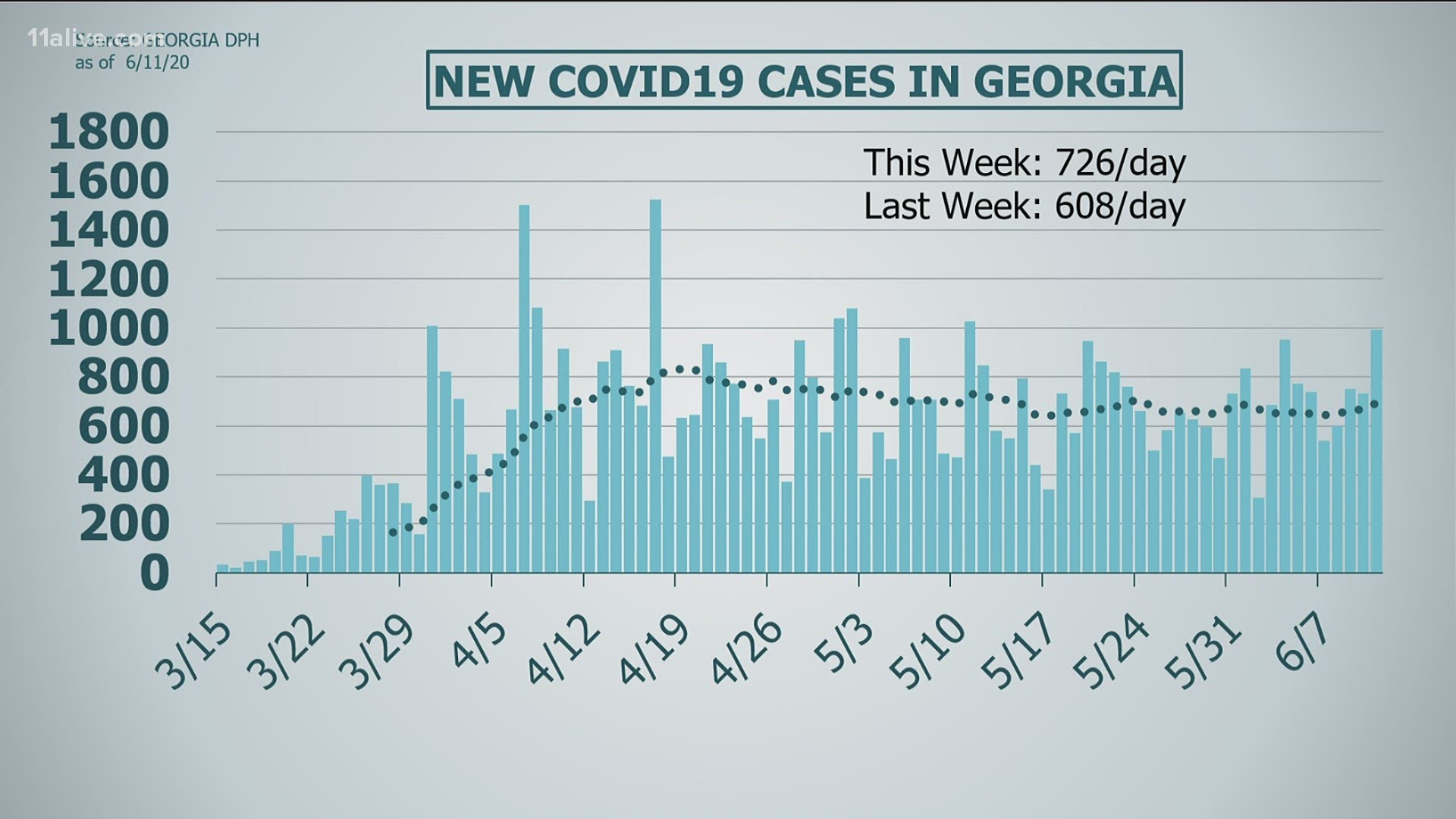 ATLANTA — In the past 24 hours we have seen a jump of nearly 1,000 new COVID-19 cases. The Department of Public Health is now reporting 54,973 total cases in our state.

We’ve all been waiting to see if Memorial Day, the protests or even the packed polls earlier this week would have an impact. While it’s impossible to pin the increase to any one factor, those studying the data say those mass gatherings are hard to ignore.

The average number of new cases reported each day this past week was 726. The days from the past week are shown in orange in the graph below. The week before that, the average daily increase of new cases was 654.

The dotted line in the graph indicates the 14-day moving average.

The differences seem dramatic from week to week, but with the trend line evening out the extreme ups and downs, the number of new cases looks relatively flat. Heiman says that is giving people a false sense of security.

RELATED: How will protests impact the spread of COVID-19 in Georgia?

He blames that inconsistency on mixed messaging from our state leadership.

“Look at the Governor’s last press conference. He had his entire team standing behind him shoulder to shoulder. With the exception of Dr. Toomey, not a single person was wearing a mask.”

The state’s four most populous counties still make up the largest share of those cases. For a second week Gwinnett, leads the pack with 713 new cases. The county public health department says it’s noticed, as well, but isn’t aware of any hot spots, just an overall increase due to testing.

The zip code 30044, which includes Lawrenceville, has consistently remained the area in Gwinnett with the most cases. The county puts out reports weekly, and on Monday, reported 642 positive cases in the zip code. That’s about 12 percent of all of the cases in the county.

As for other metro counties, Cobb had 406 new cases this past week. Fulton 307 and DeKalb reported 290 new positive test results in the past seven days.

But something that has changed recently, the metro is no longer the only source for large case increases. The data has shown a sharp increase in cases in more rural counties like Muscogee, Troup and Lowndes, reporting 231, 200, and 179 respectively.

The biggest concern, of course, is severity - how sick is the virus making people?

We are now seeing did see the first uptick in hospitalizations since the beginning of the month. In the graph below, you can see a slight rise, which is indicated in the circle.

In the past week, Fulton Cobb and DeKalb saw the highest number of new patients. We'll be watching this closely to see if more new cases are causing an increased strain on hospitals.

11Alive's numbers team is reporting on the latest data trends on the same day that Gov. Kemp further relaxed restrictions on public gatherings and gave the green light for bars to allow more people inside and live performance venues to reopen. Effective immediately, all people 65 years and older are no longer required to shelter in place, unless they are medically fragile or have pre-existing conditions.

Moderna on track for large COVID-19 vaccine test in July

There's a lot of talk of voter suppression in Georgia. What exactly is it?