Coronavirus in Georgia on May 27

Here's the latest on the state's COVID-19 data. 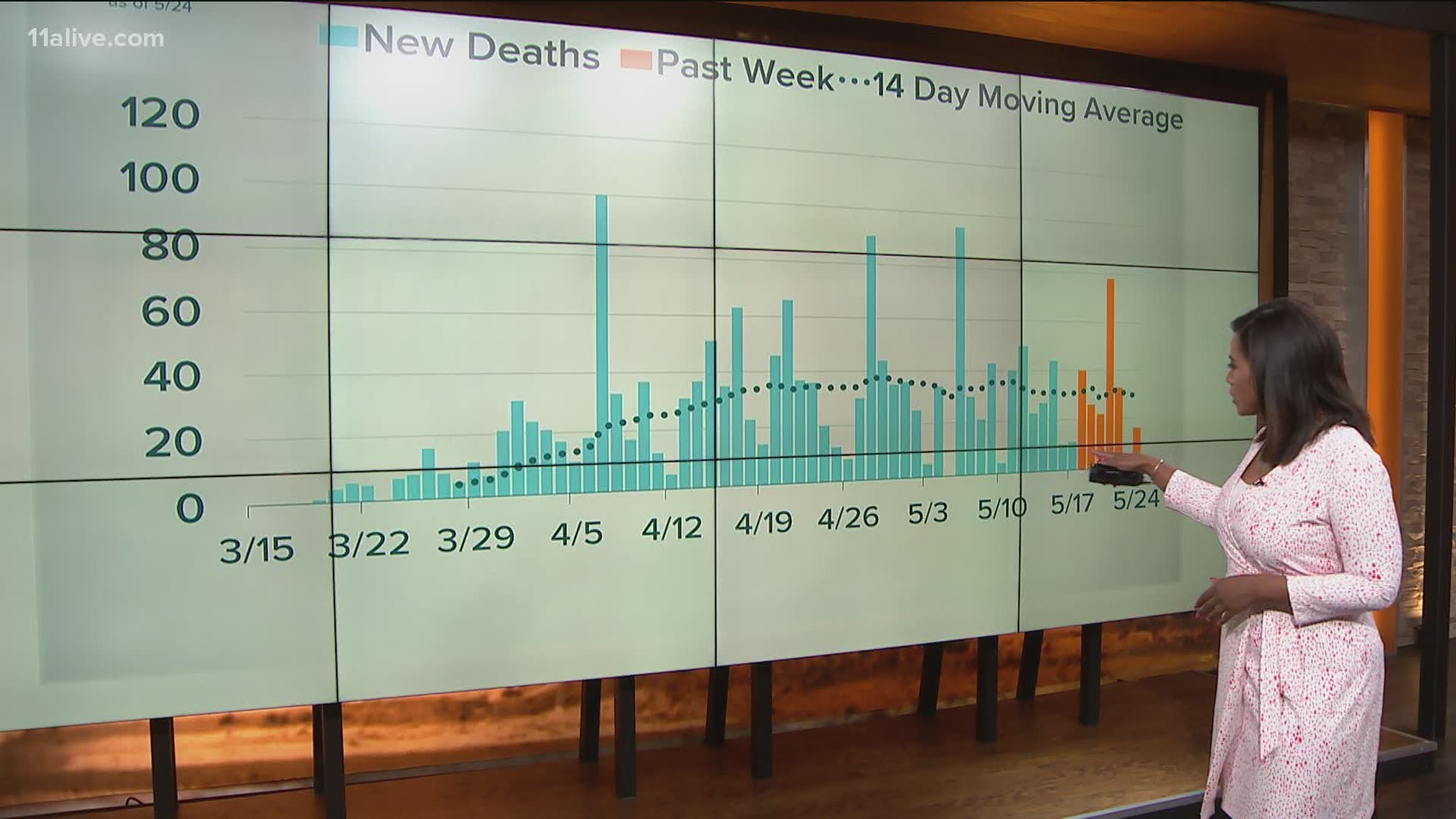 ATLANTA — Below is an archive

Visit the 11Alive coronavirus page for comprehensive coverage, find out what you need to know about Georgia specifically, learn more about the symptoms, and keep tabs on the cases around the world.

We're breaking down the trends and relaying information from across the state of Georgia as it comes in, bringing perspective to the data and context to the trends.

RELATED: Comparing the number of people hospitalized to COVID-19 deaths

State and federal officials with the Atlanta-based Centers for Disease Control and Prevention (CDC) are continually monitoring the spread of the virus. They are also working hand-in-hand with the World Health Organization to track the spread around the world and to stop it.

Things to know for Wednesday, May 27

The latest numbers from the Georgia Department of Public Health show that there are 44,638 cases of coronavirus in the state. There have been 1,933 people who have died from the virus.

So far, there have been 7,745 people who have been hospitalized from the virus. Currently, there are 910 hospitalized, an uptick in the number of current hospitalizations which had been below the 900 mark for several days.

For a current county-by-county breakdown of the virus in Georgia, visit our interactive map.

The governor and the coronavirus task force are set to hold a briefing at the state Capitol again, Thursday, to update the public on where things stand for the pandemic. The briefing will be held at 4 p.m.

11Alive will stream the briefing online and on our YouTube channel.

The City of Atlanta has expanded its guidelines to slowly reopen the city amid the COVID-19 pandemic.

The mayor’s office stresses that the city’s stay-at-home guidelines are shifting based on scientific data and not on the calendar.

"I believe the decrease in numbers that we saw is because we took very aggressive action - especially in the metro area and our densely populated areas - that made our numbers not as high as we’ve seen in other places," Bottoms said.

Social isolation can be really difficult - especially for families with small kids who might not understand the need to stay apart during COVID-19.

So when 11Alive heard this new term "germ bubble", we thought it might be too good to be true. The idea is to form a group with one or two other families - you can all see each other - but not anyone else.

It sounds exciting for people who are sick of the quarantine - but does it work? We sent 11Alive's Kaitlyn Ross out to verify.

A week after its coronavirus testing figure came under sharp criticism for including antibody tests, the Georgia Department of Public Health is now providing some clarity on how those tests fit into the large picture.

Read more on why the change is important.

According to Barron, Fulton County is up to date processing absentee ballots, after a short delay due to a staffer testing positive for the virus. Another staffer died from the virus, he said.

Barron said as of this morning the county has received, 127,000 absentee applications and 32,000 ballots, not counting mail today. To put it in perspective: in 2016 Fulton County received 947 absentee ballots for the general primary. He said this is a completely different election, and they have had to split their resources.

He added that if voters checked the Secretary of State’s website and they do not see an issue date for an absentee ballot by their name, they are asked to contact 404-612-7060 to let them know whether they have submitted an application and it is not showing up on the state's My Voter page.

Fulton County residents still have the option to drop their ballots in the 20 drop boxes across the county.

As far as in-person voting goes, the board has expand hours of early voting from 7 a.m. to 4:30 p.m. to 7 a.m. to 7 p.m. at six locations. They are also looking at opening two additional early voting locations.

On Wednesday morning, Atlanta Mayor Keisha Lance Bottoms announced the city was ready to move to Phase 2 of her five-phase reopening plan, easing some of the recommended restrictions the mayor is asking city residents and businesses to follow.

The second phase of the plan takes modest steps to restore normal activity in the city, such as allowing small, private gatherings of fewer than 10 people and curbside pickup service at restaurants and retail stores.

Read more on what moving to Phase II means for you, and how we get to Phase III.

Poll: Half of Americans would get a COVID-19 vaccine

American virus deaths at 100,000: What does this number mean?

Reservations, masks and more: This is how Six Flags Over Georgia is planning to reopen

Gov. Kemp on football opening, including fans in the stands

What can your employer require you to do amid the pandemic?