Coronavirus has likely been in Georgia since last year, governor tells 11Alive

He called on the public to call out neighbors and establishments that aren't practicing social distancing or other requests to slow the coronavirus. 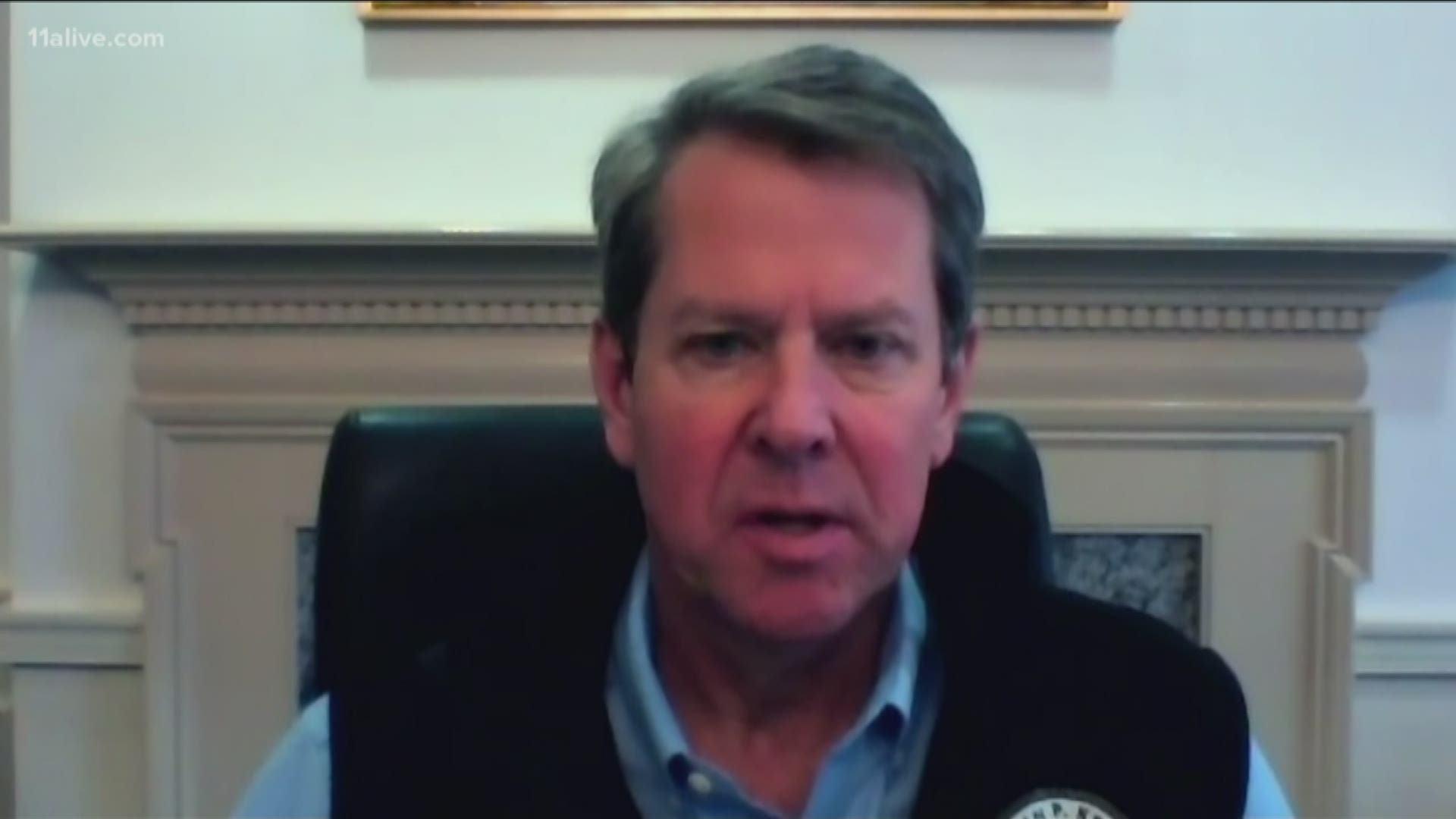 ATLANTA — Brian Kemp continues to urge Georgians to stay home and social distance as the state continues its fight to slow the spread of COVID-19. In a one-on-one with 11Alive's Cheryl Preheim, Kemp said that it's extremely important that elderly residents stay home if at all possible - the reason behind his previous shelter-in-place order for at-risk groups.

Kemp reiterated the importance of having relatives, neighbors and friends take over roles that involve going out in public for at-risk groups - especially the elderly.

RELATED: Coronavirus in Georgia: Confirmed cases climb to 1,247 with 40 deaths

In the interview, Kemp told 11Alive that he believes the virus may have been here well before the first cases were confirmed - possibly stretching all the way back to December 2019 or early January.

Since then, the increased capacity for testing has revealed an exponential increase in the amount of cases. That's why Kemp called Monday's decision to order a shelter-in-place for the "medically fragile" in Georgia a move in the right direction, and added that he's in favor of helping Georgia's counties while respecting their decisions as they work through virus concerns.

"They're dealing with the whole set of different problems, depending on where they are, what kind of city it is, versus the city of Atlanta," Kemp said.

"Or, you know, I talked to elected officials in Jeff Davis County and Hazlehurst today, and they don't have a case, but they're already talking about doing an emergency order," he added. "And I said, look, 'I'm not going to tell you what to do.'"

However, he said getting ahead of the virus is the right thing to do for all of Georgia's communities.

Kemp also said that with testing now becoming more readily available, he intends to make sure "priority order" remains for front line healthcare workers, emergency responders and others who meet certain criteria in the battle against COVID-19.

"[What] we've got to know is if they're exposed, whether they are positive or not and whether they need self self-quarantine or not," he said. "And that is vital to the care of individuals that are in the hospital and under medical supervision."

He said those who are most vulnerable are also a high priority on the testing lists. He said there's also work to get tests back more quickly from commercial labs. But at this point, it's a matter of dealing with the hand that they've been dealt

"If we had more tests then, you know, we could be testing everybody. And as we got positives, we could order those folks to be in self-quarantine at their homes like was down in South Korea," Kemp said. "But we're just not at that point. So, there's no need wasting time trying to do that."

He said, at this point, they have to do the best that they can with the advice of public health officials and the Centers for Disease Control and Prevention.

"And I want to thank our citizens for helping us with that, but really obeying the orders that we have now and doing the smart thing and, you know, support in restaurants," Kemp said. "But get up and social distance yourself when you're at the grocery store."

As for the influx of patients at local hospitals, Kemp said he and his task force are aware and are working to find solutions quickly.

"We are looking at facilities right now for potential surges for hospitals so we can have hospital beds stood up," Kemp said. "We're looking at self-quarantined sites as well to support the overflow of folks that test positive that are asymptomatic or, you know, trying to wait and see where they are if they've been exposed to someone."

In the long run, Kemp said he's been glad to see most of the population adapt and stop common practices like hugging and shaking hands.

"And I want to urge all our citizens to do that. I made a call for people to call out your friends and neighbors if they're not abiding by the social gathering rules and they're congregating in large groups," Kemp said.

"Or if restaurants are not doing as we asked to have and practice social distancing, then people need to go to another establishment and support that is. Or call your neighbors out and say you've got to do your part, too."

VERIFY: CDC, WHO do not recommend homemade masks