Florida began its ban of selling alcohol in bars on Friday, to the surprise of bar owners in Jax Beach. 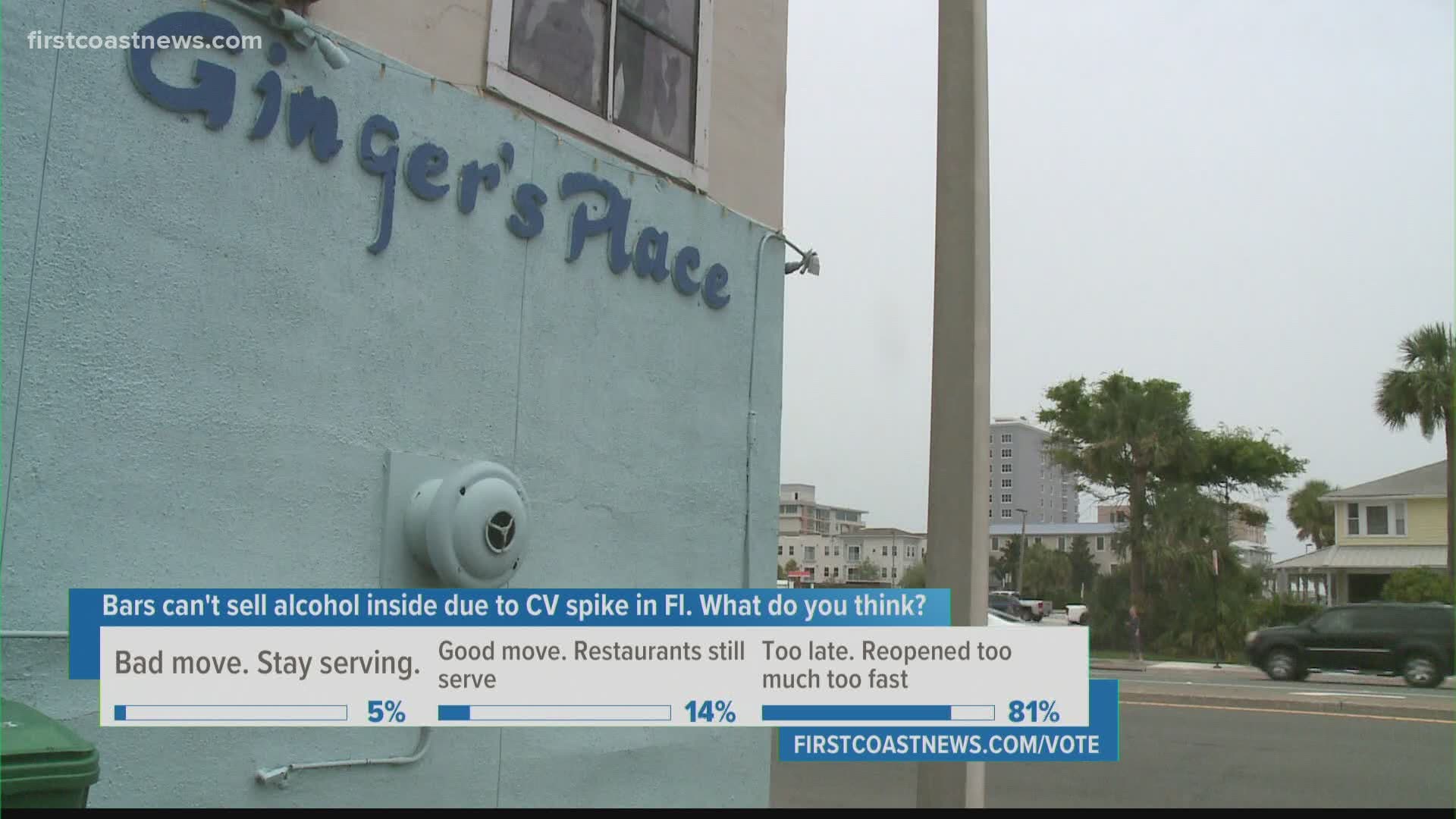 JACKSONVILLE, Fla — The neon lights may be on – but the taps will be off.

Florida’s bars have been turned dry by a tweet from the state, immediately suspending bars from serving alcohol.

Gov. Ron DeSantis and Jacksonville Mayor Lenny Curry blamed bars for the recent spike in COVID-19, and bar owners are not taking kindly to that accusation.

The order does not impact restaurants.

They still operate under phase two rules: 50 percent capacity, with spaced out tables.

She also feels the state should be communicating these guidelines in a better way to businesses.

“You can’t turn us on and off like a light switch. It’s just not fair,” Breidert told First Coast News.

Breidert says they are following all the reopening guidelines.

After being shut down for weeks, she says she’ll do whatever she can to keep the bar open.

“The uncertainty of everything is the worst thing because you just don’t know. Are you going to be open today or not? Should I buy alcohol or not? You can’t just open up a bar and not have anything to sell,” Breidert said.

A new order by the Florida Department of Business and Professional Regulation says all bars making more than 50 percent of their revenue from alcohol can’t serve drinks on site.

Drinks can be sold in sealed containers to-go, according to the order.

Restaurants or bars that make less than 50 percent of their revenue from alcohol can remain open and serve alcohol inside.

Jacksonville Beach Mayor Charlie Latham is in support of the state’s decision.

“This is certainly a way to cut the head of the monster off, and I can understand why this decision was made,” Latham said.

Breidert says her bar got their food license days ago, so she plans on making adjustments under the new guidelines.

She wants to adjust so she can stay open and keep her employees working.

“These are business people with employees that need money that have to work. We’re not a pawn in the chess game. That’s not how this works,” Breidert said.

Mark Stillman owns Green Room and said he just reopened his business a few weeks ago. He said he has followed CDC guidelines, sanitizing and social distancing the tables inside.

"It felt like we were doing a good job and we had gone the extra mile, and so to see this come back and really threaten whether we can reopen again is very disappointing," he said.

Stillman says he found out about the state's emergency order through friends who saw it on Twitter.

"It would've been nice to plan maybe a day or two ahead. They saw those stats [about COVID-19] and they could've given us some courtesy," he said.

"For people like us that are trying to earn a living it would've been nice," Stillman said.

Friday, he sold to-go drinks until eight p.m., but said he isn't sure what's next.

"We're scrambling. We've been scrambling all afternoon contacting employees to reach out to them. They're asking me what's going to happen and I'm not even sure I have the right official notice or what exactly is going on," Stillman said.

Owners of other bars at the beach said Friday afternoon they planned to stay open and sell to-go drinks, but by Friday night, most were closed.

"It means we're going to take another deep dive as far as our earning capacity. We've got folks that just now were just brought back on and we won't be able to keep them busy and earning an income," he said.

Most bars at the beach were closed Friday night. Hoptinger posted on Facebook it will be closed through Sunday.

The Shim Sham Room said on Facebook it is closed until at least Monday when they'll "reevaluate." Lights were inside several other bars including Lynch's Pub, Surfer The Bar, The Ritz, Brix Taphouse, Tavern on First and The Wreck Tiki Lounge.

It’s unknown how long this order could last.

Jacksonville Beach Mayor Charlie Latham says their local ordinance could last until the state of emergency order is over or if the city decides to manually lift the restriction.