Baptist Health's CEO sent an email to staff Sunday asking for volunteers. So far, 200 nonclinical employees have volunteered to come in and help. 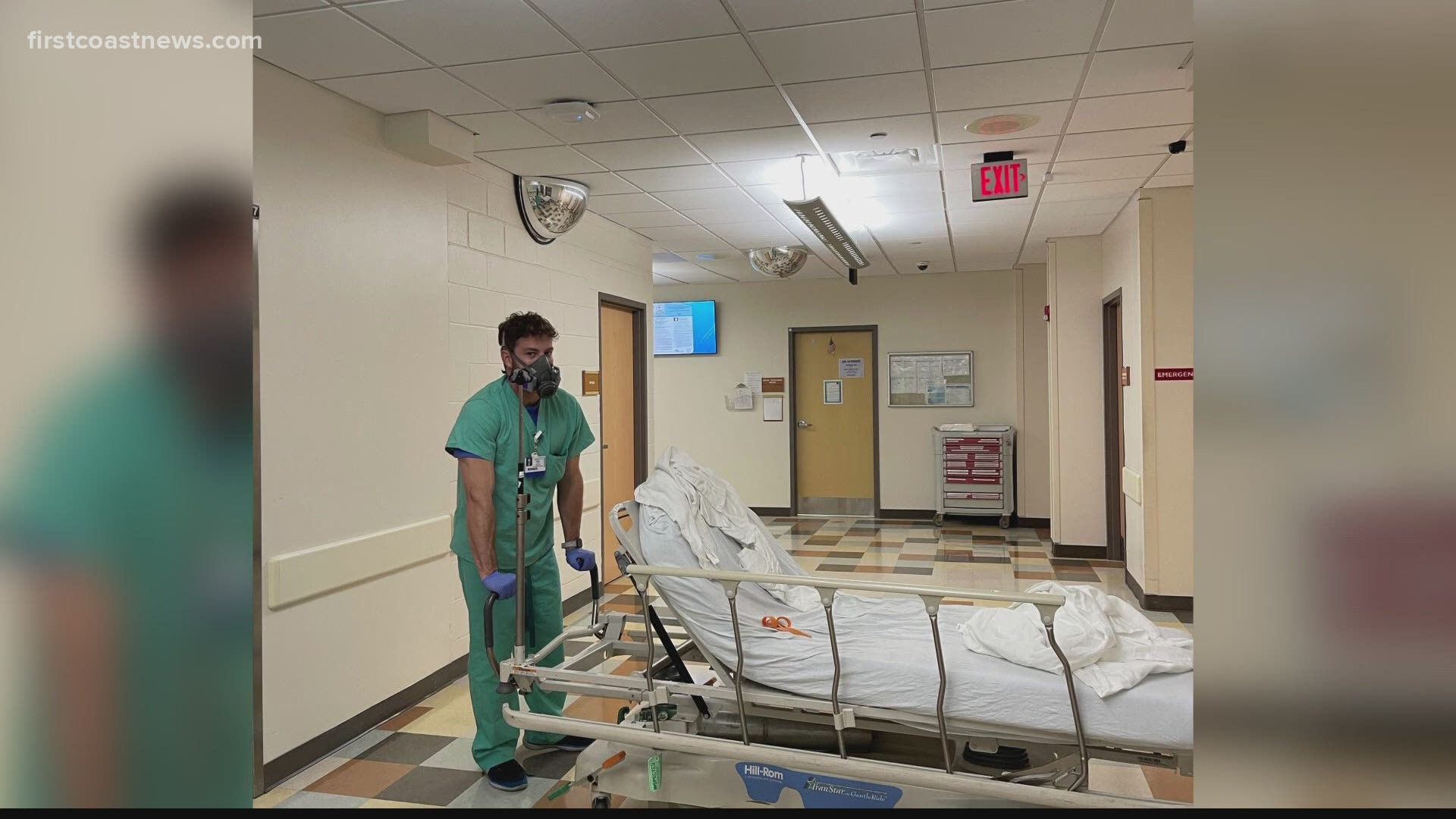 JACKSONVILLE, Fla. — The high number of COVID patients at Baptist Health system-wide caused the CEO to ask staff members to volunteer to help out in the emergency rooms.

Phil Gaby's day job is the Director of Strategic Sourcing at Baptist. After a full day in his office, Gaby volunteered to work two to three hours in the emergency room at Baptist South.

“You know, traditionally, during the first two waves, my team and I, we were tasked with finding all the PPE and buying it," Gaby said. "And now I'm actually wearing it."

He suits up in the PPE to take out the trash, clean rooms, transport patients or anything else the clinical staff needs.

The high number of COVID patients admitted system-wide at @BaptistHealthJx caused the CEO to ask staff to volunteer to help in ERs. 200 nonclinical employees *volunteered* to come in after hours to take out trash, clean rooms, etc. Phil Gaby is the Director of Strategic Sourcing. pic.twitter.com/rfGrMjrGEB

"You see what the frontline workers are going through and how much pressure is put on their job on a day-to-day basis," Gaby explained. "If there's anything we could do to come in here and alleviate some of that pressure of the mundane routine tasks that they usually have to do if we could take that off their hands and allow them to focus on taking care of the patients in our community, that's what we want to do, especially in a time like now where so many people are coming into the EDs in the hospital with COVID."

According to a spokesperson for Baptist, since their CEO sent out the email Sunday with the ask, 200 nonclinical staff members have volunteered to come in after-hours and pitch in.

Tuesday, the COVID-positive patients passed 400 system-wide, according to a spokesperson. Eighteen of those patients are children of all ages, Baptist's CEO Michael Mayo said in a statement Tuesday.

More than 97 percent of those patients are unvaccinated.

Gaby said he transports a little more than a dozen COVID patients each night.

"Almost every single one of them, unsolicited, just came out and told me they said, 'I would do anything to go back and get the vaccine,'" he said. "They basically said, you know, 'this virus is the real deal. It's no joke,' and they wish they had the vaccine, and that's something that I think I'll never forget."

Tammy Daniel is the Chief Nursing Officer for Baptist Health systems. She said the volunteers have been amazing.

"They know that our team has been doing this for a year and a half and not all of them have been that closely involved with it, so they’re stepping up to fill in that gap and give people a little bit of a breather," Daniel said.

"It just shows what kind of hearts people in healthcare have and that they step up to do whatever the community needs are," she said.

Daniel said this is the worst she's seen COVID throughout the pandemic.

"Since we started this last March in 2020, this is definitely the worst that we’ve seen it. This past week we’ve seen volumes, every day setting records in our emergency department," she said.

"Every single day the next day is worse than the one before, and then admitting double-digit COVID patients," Daniel explained. "We’ve stepped into it really well, but we’ve had to add beds outside our normal existing areas just to meet the capacity," Daniel said.

According to Daniel, the patients are younger and healthy.

"That’s scary when we think about the young people that are healthy and the pediatric population that are being impacted, so that’s a little different this time," she said.

”My message to everybody is this is real. Please put all of your political feelings aside and just look at the evidence right in front of us even in our community right here even in the Jacksonville area," she said. "All of our hospitals are feeling this. If you’re considering being vaccinated, look at the data to show that 97 percent of the people in the hospitals aren’t, so use the data right in front of you, the science right there," Daniel said.

A Baptist spokesperson said they're not sure how long they'll continue needing volunteers, and will take it week by week.

Baptist Health CEO and President Michael Mayo made a statement on Facebook Tuesday discussing the effect of the COVID-19 resurgence on the hospital and pleading with people to educate themselves on the vaccine.

A MESSAGE FROM OUR CEO: Northeast Florida has been hit hard by the COVID-19 pandemic, but it’s never been as bad as it...