Alex Trebek's fight: Why is pancreas cancer such a beast?

We go to Mayo Clinic-Jacksonville and talk with researchers about the Wicked Wall. 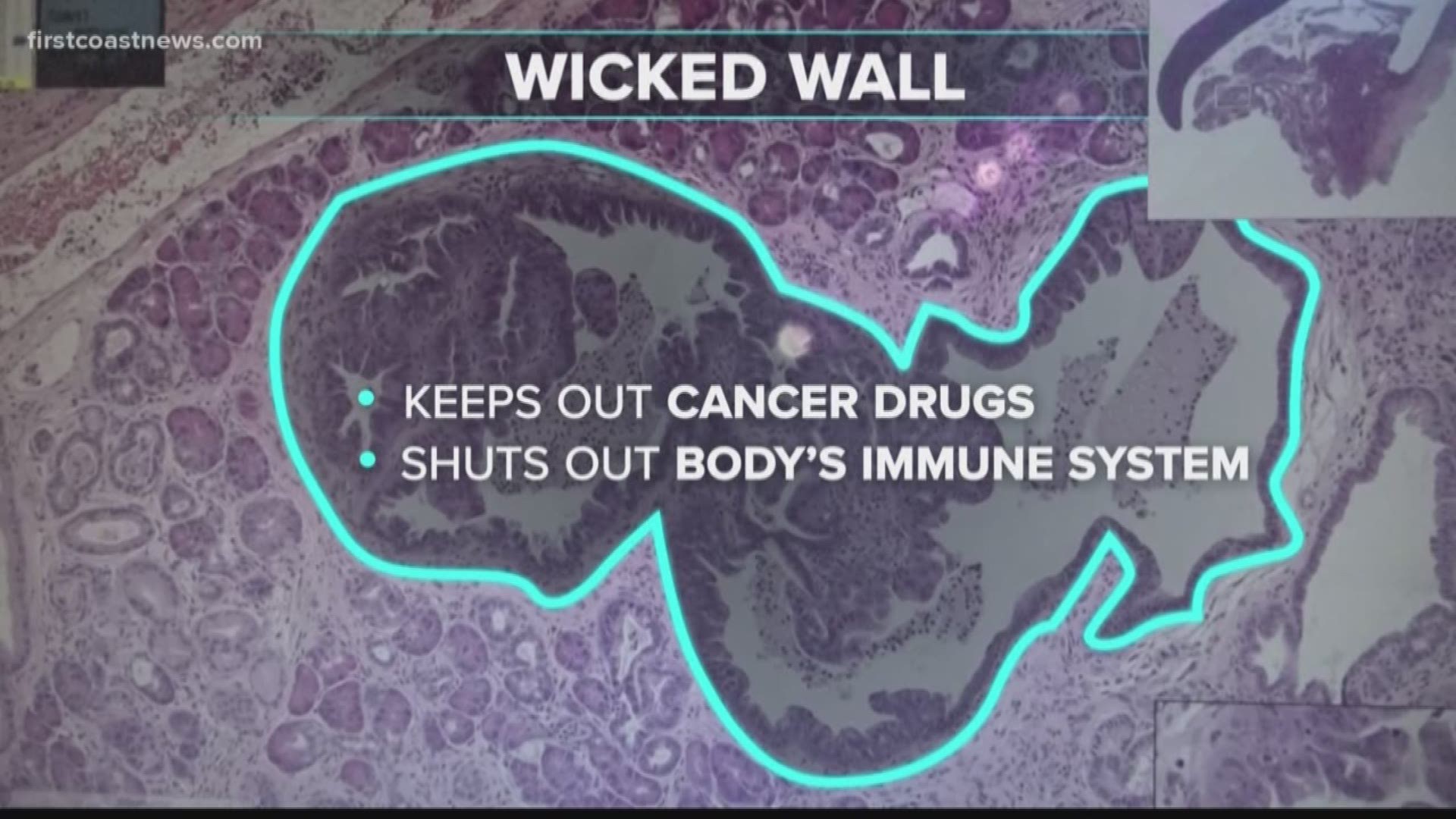 JACKSONVILLE, Fla. — Jeopardy host Alex Trebek is opening up for the first time about his rugged journey. "I'm fighting through it," he tells Good Morning America. He says chemo leaves him feeling "so weak all the time."

The scary statistics didn't come up in his interview. But only 9% of patients are alive five years from their diagnosis. More than 90% are diagnosed in late stages. Trebek has stage 4.

So why is pancreas cancer such a beast?  Researchers point to what you could call the Wicked Wall.

We talked with research scientist Dr. Peter Storz at Mayo Clinic-Jacksonville. He says the image above shows pancreas cancer inside the blue outline.  That blue perimeter -- that Wicked Wall -- is dense; more dense than the border around, say, breast cancer, and some other cancers.

It's a key reason pancreas cancer is one of the most lethal of all cancers.

The wall does two bad things:

1) It keeps out good cancer drugs from reaching the cancerous tumors.

2) It shuts out the body's own immune system from fighting the cancer.

But Dr. Storz and his team have spent the last two+ years investigating a drug that might fight against the Wicked Wall.  They say tests in mice show the drug can shrink that wall and allow the body to attack the cancer.

The drug is already FDA approved for a blood cancer, multiple myeloma. It's called Pomalidomide.

So when could it help pancreas cancer patients?  That's a good question. The process of clinical trials takes time, and Mayo Clinic isn't releasing any details at this point.

"In the world of pancreas cancer treatment, we're seeing a lot of encouragement and a lot of failures," says Mayo Dr. Kabir Mody. But Dr. Mody says the work by Dr. Storz and team is worthy of true optimism.

The image above shows a container inside the Mayo Clinic research lab filled with millions of pancreas cancer cell lines from a human patient. This is used for the complex research at Mayo.

As for funding, Dr. Mody applauds pancreas cancer patient Judi Zitiello and her non-profit Champions For Hope. The group has already raised more than 1.2 million dollars for research. You can help with a golf tournament this June or you can just donate.

Zitiello says she wishes Trebek the very best in his fight. Trebek plans to be back this fall for the 36th season of Jeopardy.

Meanwhile, the attention on the cause of pancreas cancer is welcome to those in the fight. (By the way, Trebek calls it "pancreatic cancer" and Mayo is changing its wording to "pancreas cancer." There's no right or wrong term. Mayo doctors just say they prefer to call the cancer "pancreas cancer"  because other cancers, such as breast or kidney, are termed after a body part.)