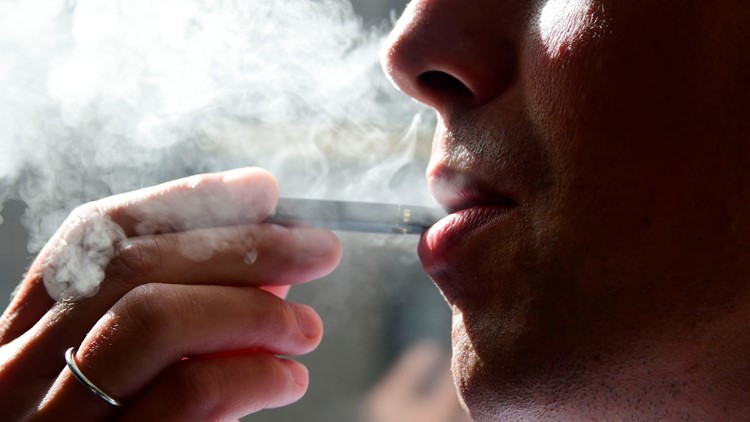 Photo by: EVA HAMBACH/AFP/Getty
An illustration shows a man exhaling smoke from an electronic cigarette in Washington, DC on October 2, 2018.

After just three months of vaping, Jacksonville teen hospitalized with holes in his lungs

The 17-year-old has been at Wolfson Children’s Hospital since Tuesday because of his vaping addiction and the trauma it’s caused his body. He’s a sophomore — with asthma — who attends Douglas Anderson High School. And he’s not the only one affected by the epidemic.

The uptick in youth vaping prompted the U.S. Surgeon General to issue an advisory in December.

“In the data sets we use, we have never seen [the] use of any substance by America’s young people rise as rapidly as e-cigarette use is rising,” United States Public Health Service Secretary Alex Azar said.

The same day Pantazi was admitted to Wolfson, a sixth person in the United States died from lung disease related to vaping, according to health officials.

“I didn’t even know he was vaping,” Dallas’ mother, Dena Pantazi said. “His sister does it. She’s 18. I don’t condone it, but I can’t stop it. Well, Thursday I look outside and they’re both in her car smoking. I can see the smoke coming out of the car.”

The teens were using a JUUL vaping device, according to their mom. JUUL is a widely popular vape brand that school administrators and law enforcement credit for establishing the teen vaping phenomenon.

Though Pantazi denies it, it’s unclear if Dallas smoked anything besides JUUL pods. Many people who have been hospitalized due to vaping were vaping THC or altered street products sold illegally, as noted by The Chicago Tribune.

In Florida, it’s illegal to sell vaping products to anyone under the age of 18, but school resource officers across the state say teens find ways around it, offering older friends money to buy pens and cartridges for them.

Throughout the state, Attorney General Ashley Moody has visited schools, speaking with teachers and faculty about what she’s calling a vaping epidemic.

“One of the biggest struggles they [school administrators] have is kids and parents don’t understand that it is dangerous,” Moody said. “It’s not something that’s harmless. I believe that they feel they’re battling perception. Today we focused on learning how serious this in our state.”

At a meeting with teachers in Nassau County, a school resource officer from Fernandina Beach High School told Moody in the past two years, he had written 93 civil citations and collected more than 200 vapes and JUUL devices.

According to Truth-Initiative, a nonprofit public health group, JUUL pods’ nicotine content is among among the highest on the market. One pod contains about 20 cigarettes worth of nicotine.

“To them, the kids just think it’s flavored vapor,” Pantazi said. “But these are just synthetic chemicals going right to your lungs with no filter.”

Now, Dallas has been diagnosed with pneumomediastinum — a condition where since Dallas has been vaping consistently with asthma, the chemicals made holes in his lungs. Air surrounds his lungs, causing the coughing episodes and a feeling he describes as a stabbing pain around both lungs.

“People think vaping is just flavored water,” Dallas — whose brother is a Times-Union employee — said. “But just because it makes you fit in doesn’t mean you should ... you’re not invincible.”

This week, President Donald Trump announced his administration’s plan to ban the sale of flavored e-cigarettes, citing its popularity among today’s youth.

“We can’t allow people to get sick,” Trump said. “And we can’t have our kids be so affected.”

“While we may not yet fully understand the harmful effects these products can have on the human body, we know that use is skyrocketing among young people and that there is rapidly growing concern in the medical community about their use,” Moody said. “I know that Florida’s families will appreciate President Trump’s actions and they can count on me and my office to work alongside his administration to protect our youth.”

Overnight Thursday, Dallas felt the sharp pains. He moaned in agony, sweating, with a compress on his forehead and clutching a pillow to his chest. Even with morphine and Benadryl in his system along with a battery of other drugs supplied by his medical team, he describes the pain as a “seven” out of 10.

It’s safe to say the pain has taught Dallas a lesson. He’s shared his story with local media in an effort to get the word out to other teens his age before it’s too late.

“Vaping’s not cool and you just need to stop,” Dallas said. “Just because everyone else is doing it doesn’t mean you should.”

Doctors say he has to ride out the pain, for now, let his body absorb the oxygen he’s on and allow the air pockets to settle around his lungs. Dallas’ X-rays show that his lungs are improving, but the family awaits CAT scan results to determine if there’s permanent damage.

“He never stops saying how he’s so sorry and he’ll never smoke anything again,” his mom said. “I took [a] video of the pain he was in just to remind him. In a sense, it’s for a good cause. He never wants to experience this again, so hopefully, he remembers that.”