George Zimmerman said Wednesday the online auction has ended for the sale of the gun he used to kill Trayvon Martin in 2012 and he was immediately notifying the winner. 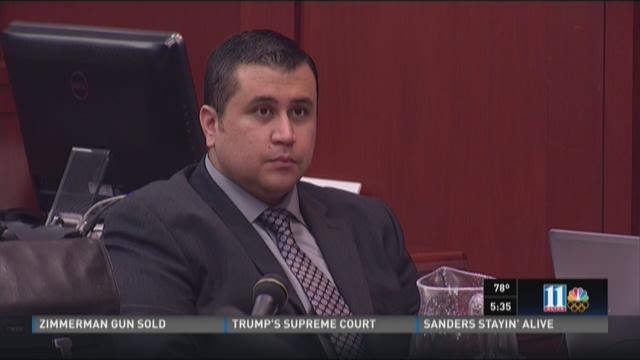 George Zimmerman said Wednesday the online auction has ended for the sale of the gun he used to kill Trayvon Martin in 2012 and he was immediately notifying the winner.

"First and foremost, I would like to thank and give the glory to God for a successful auction that has raised funds for several worthy causes," Zimmerman said in a blog message. He said it would be up to the winning bidder to decide whether to remain anonymous.

While he did not indicate the size of the successful offer, the bidding began at $100,000. Zimmerman also hinted at "future auction items" but did not elaborate.

In an earlier statement, Zimmerman said he planned to use the money from the sale to fight "Black Lives Matter" violence against law enforcement officers and to counter "Hillary Clinton's anti-firearm rhetoric." He also said money would be used to "ensure the demise of Angela Correy's (sic) persecution career." Corey was the special prosecutor appointed to investigate Martin's death.

United Gun Group also confirmed bidding was finished and Zimmerman was "vetting several offers and verifying funds." It also did not indicate the size of the final offer or the name of the successful bidder, saying without elaboration that two auctions had taken place simultaneously, one for pre-qualified bidders and one for the public.

The last bid on the public site came one minute before the action closed and was from a user named "John Smith" for $138,900, the Orlando Sentinel reports. It was not immediately clear whether it was a legitimate bid.

Zimmerman said in an interview this week with The Daily Beast that one of the "firmest offers" with verified assets was for $100,000. The amount was the required opening bid in his third attempt to auction the weapon.

Zimmerman, then a neighborhood watch volunteer, shot and killed 17-year-old Trayvon in February 2012, in a confrontation as the unarmed teenager was heading back to a relative's house in Sanford, Fla., after buying snacks at a convenience store.

Zimmerman claimed the black teenager was trying to bash his head on the pavement during a struggle and a jury found him not guilty of second-degree murder and manslaughter.

"This is a piece of American History," he wrote in his auction listings. "It has been featured in several publications and in current University text books."

His first attempt to auction the weapon last week was pulled by the website, GunBroker.com. The company, which is based in Kennesaw, Ga., said it wanted "no part in the listing on our web site or in any of the publicity it is receiving."

The second attempt, on the United Gun Group site, was halted not long after it started because of a flood of clearly bogus bids that drove the price to over $65 million.

The third attempt went more smoothly, with a required minimum bid of $100,000 and the web traffic closely monitored.

Before the auction closed, Todd Underwood, who runs the site, commented that despite internet trolls driving up the price, the auction might have helped Zimmerman find a real buyer. "Regardless, (Zimmerman) has been contacted by several real bidders with verified funds," Underwood wrote, according to the Sentinel.

In his listings, Zimmerman wrote that he was "honored and humbled" to put the Kel-Tec PF-9 pistol up for auction.

"The firearm for sale is the firearm that was used to defend my life and end the brutal attack from Trayvon Martin on 2/26/2012," he wrote.

Zimmerman, 32, noted the Justice Department returned the weapon to him recently and it still bore the case number written on it in silver permanent marker.

In his interview with The Daily Beast, Zimmerman showed no remorse over the killing, and for the first time publicly blamed Trayvon's parents for the incident.

"They didn’t raise their son right. He attacked a complete stranger and attempted to kill him,” Zimmerman said of Trayvon.

“Sybrina Fulton and Tracy Martin did everything they could to capitalize on her son’s death,” he said. “She was never a mother figure to him. Tracy Martin couldn’t have cared less about their son. He treated him like a dog without a leash.”

A spokesperson for the Martin family declined to comment on the auction.

Zimmerman has had several run-ins with the law since the shooting, including domestic abuse charges and an alleged road rage incident.