“The matter is much larger than photoshopped yearbooks," said Riley O'Keefe. "It’s the way young women’s bodies are viewed not only by the district but the world." 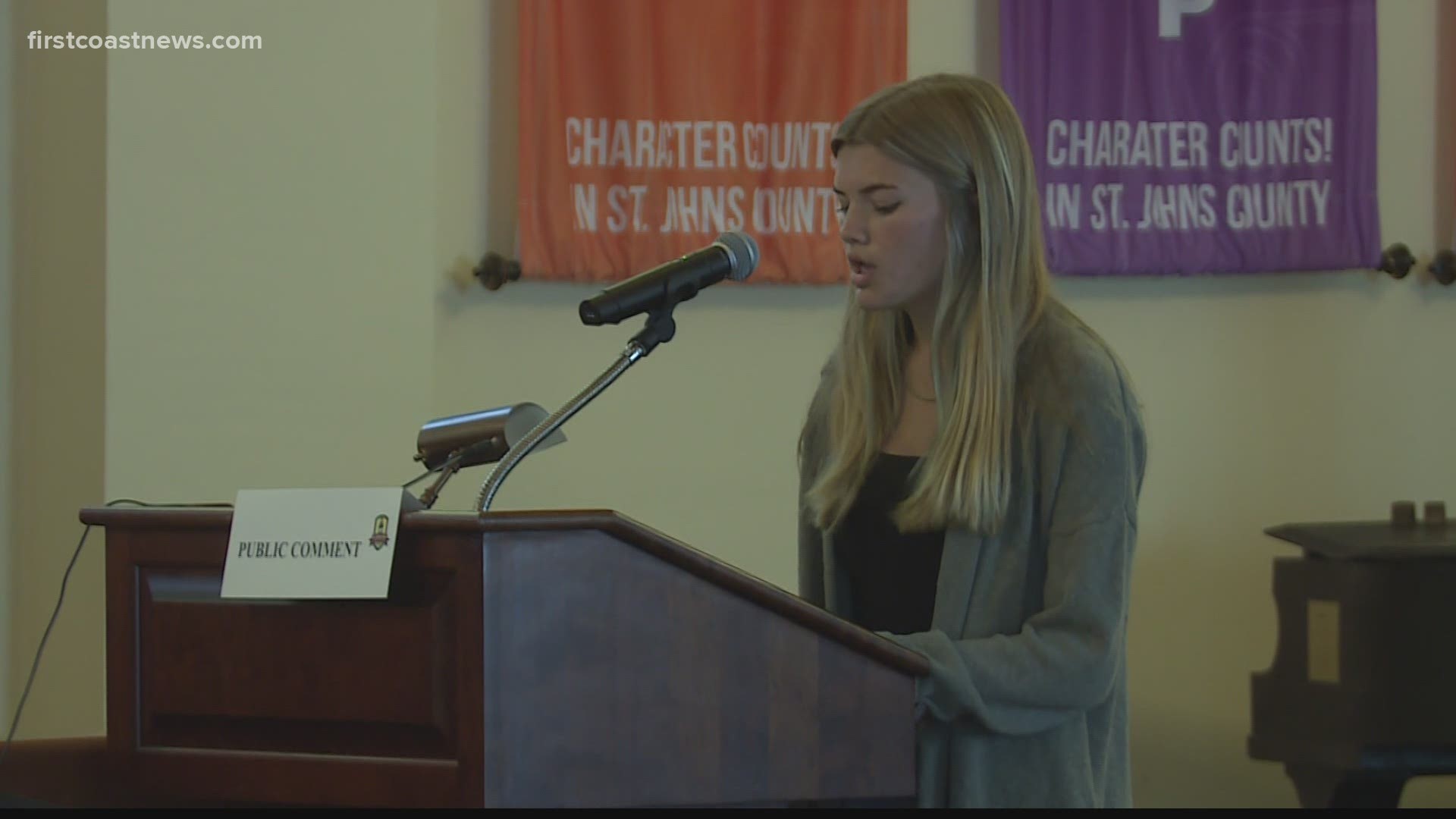 ST JOHNS, Florida — The St Johns County School Board Workshop was filled with passion Tuesday as students and parents filled the public comment section with demands for change to the district’s dress code.

Students said the world knows about their botched yearbook photos, but the problem goes much deeper than that.

Bartram High School freshman Riley O’Keefe said it is a distraction to their learning, and destructive to their self-esteem.

“The matter is much larger than photoshopped yearbooks or dress code sweeps,” Riley said. “It’s the way young women’s bodies are viewed not only by the district but by the world.”

Riley faced the school board wearing the same outfit she wore in her yearbook picture that was censored.

“By imposing the current dress code and editing women’s bodies, you are reinforcing the idea that our changing bodies are something to be ashamed of,” Riley said to the board.

There are separate sections for girls and boys in the district’s dress code.

The girls’ dress code uses the terms “modest” and “not revealing or distracting.”

“We are subjectively judged for being immodest, not revealing and distracting for boys,” student Zoe Lannone said to the board, while also wearing the same outfit from her picture that was censored.

Zoe’s mother told the board, that outfit is what made her daughter feel confident after losing her hair from fighting a life-long disease.

“She picked a lavender sweater and a pretty necklace to make sure she wasn’t mistaken for a boy,” Zoe’s mother said.

Emotional testimonies led to the demands made Tuesday, which included removing the term “modest” from the dress code and define “distracting,” removing the measurement requirement for shorts and skirts and removing the standards that separate girls from boys.

“It was so powerful,” Riley said. “There were so many people who had good messages to send and I think they would have been crazy not to listen to us.”

“The dress code is being revised, but the other thing is consistency on how we utilize that dress code,” Forson said.

Forson said a committee will most likely be formed in the future to determine how to change the dress code. He said that committee may include, teachers, parents, students, administrators and maybe even a psychologist.

School board member Patrick Canan said there is a tricky deadline to get this done.

“There’s a publishing deadline for that code of conduct to get drafted,” Canan said.

Canan said that deadline is June 8.

“I’m not sure what is going to happen,” Canan said.

Forson said it will be tricky to figure out how to configure the dress code so quickly, but there will be some sort of change for the 2021-2022 school year.

“The yearbook was a mistake,” Forson said. “It was something we need to do better by it. I am certainly sorry to each of those girls who were unknowingly impacted by it.”

Though Riley and many others are upset with how their yearbook photos turned out, many said, it may have been worth it.

“There wouldn’t have been the outcome we got from it,” Riley said. “I think it really nudged them to make the right decision and change the dress code.”