The lawsuit seeks to reinstate Donofrio to her teaching position and to ban school policies that prevent educators from supporting movements like Black Lives Matter. 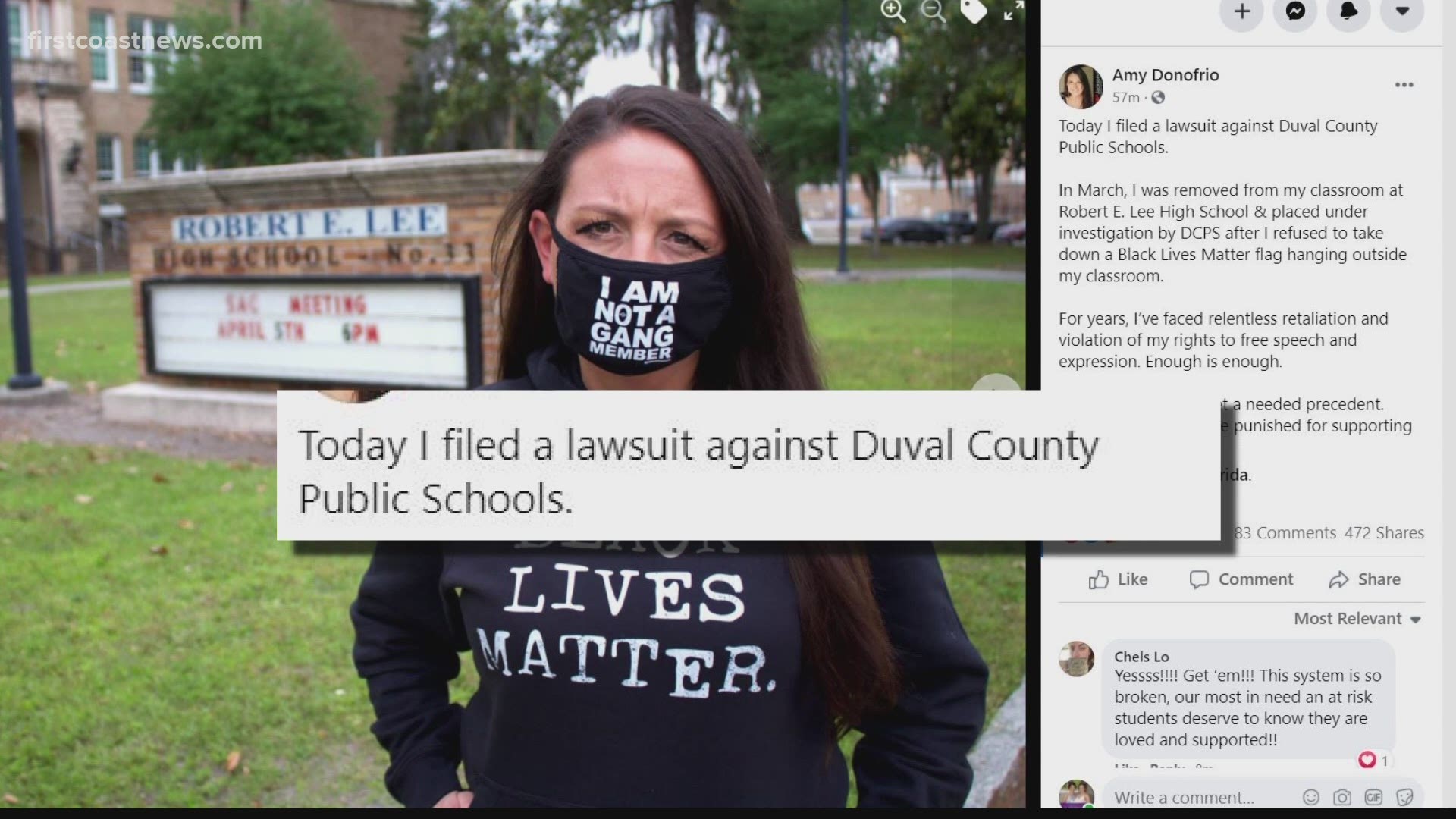 JACKSONVILLE, Fla. — The Southern Poverty Law Center is suing Duval County Public Schools on behalf of Amy Donofrio — the teacher who was removed from the classroom after she refused to take down her Black Lives Matter flag — a news release said Friday.

The lawsuit was filed in the United States District Court for the Middle District of Florida by the SPLC and private employment law firm Scott Wagner and Associates, P.A.. It seeks to reinstate Donofrio to her teaching position and requests a court order banning school policies that prevent educators from exercising their First Amendment rights by supporting the Black Lives Matter movement and "advocating for anti-racist curricula and policies."

More: 'A name that represents me': Young people lead the push for Lee High rename

Records show the premise of the lawsuit is for retaliation and right to free speech. Along with the school district, Donofrio is also suing Scott Schneider — who currently serves as Duval Schools' High School Region Superintendent — for "relentless retaliation and violation of her rights to free speech and expression."

Before Schneider became a district-level administrator, he served as the principal at Robert E. Lee High School where Donofrio worked. Donofrio co-founded the EVAC Movement, and taught a class for the program at the school. The class was shut down under Schneider's leadership in 2017.

The Times-Union reached out to Schneider and the school district for comment. The district declined to comment citing pending litigation.

Donofrio, who has been teaching for 13 years, was removed from the classroom in late March, the same week she says administrators told her to remove a Black Lives Matter flag from her classroom's doorway. She is currently on paid temporary assignment within Duval Schools' warehouse operations center.

The SPLC says Donofrio's removal was "in retaliation for displaying the flag over school administrators' objections." They added that Donofrio has been outspoken about racist comments made at community meetings surrounding the renaming of Lee High School.

But an email from Duval Schools Superintendent Diana Greene said that Donofrio was being reviewed by Human Resources for "several matters." The school district said it was unable to elaborate.

After Donofrio's removal, current and former students of Donofrio's started an online petition to reinstate the high school teacher. It collected thousands of signatures. The timing of her removal has heightened an already tense climate at Lee High School because of the controversy surrounding the school's potential renaming.

“I hope this case will set a needed precedent. Teachers should not be punished for supporting their students’ humanity. Our students matter, and as educators, we will no longer tolerate them being systemically damaged, silenced, and failed,” Donofrio said in a statement. “To our Black students, we see you, we stand with you, and you matter.”