Musicians and the music industry are suffering, but educators are determined to not let music education suffer. 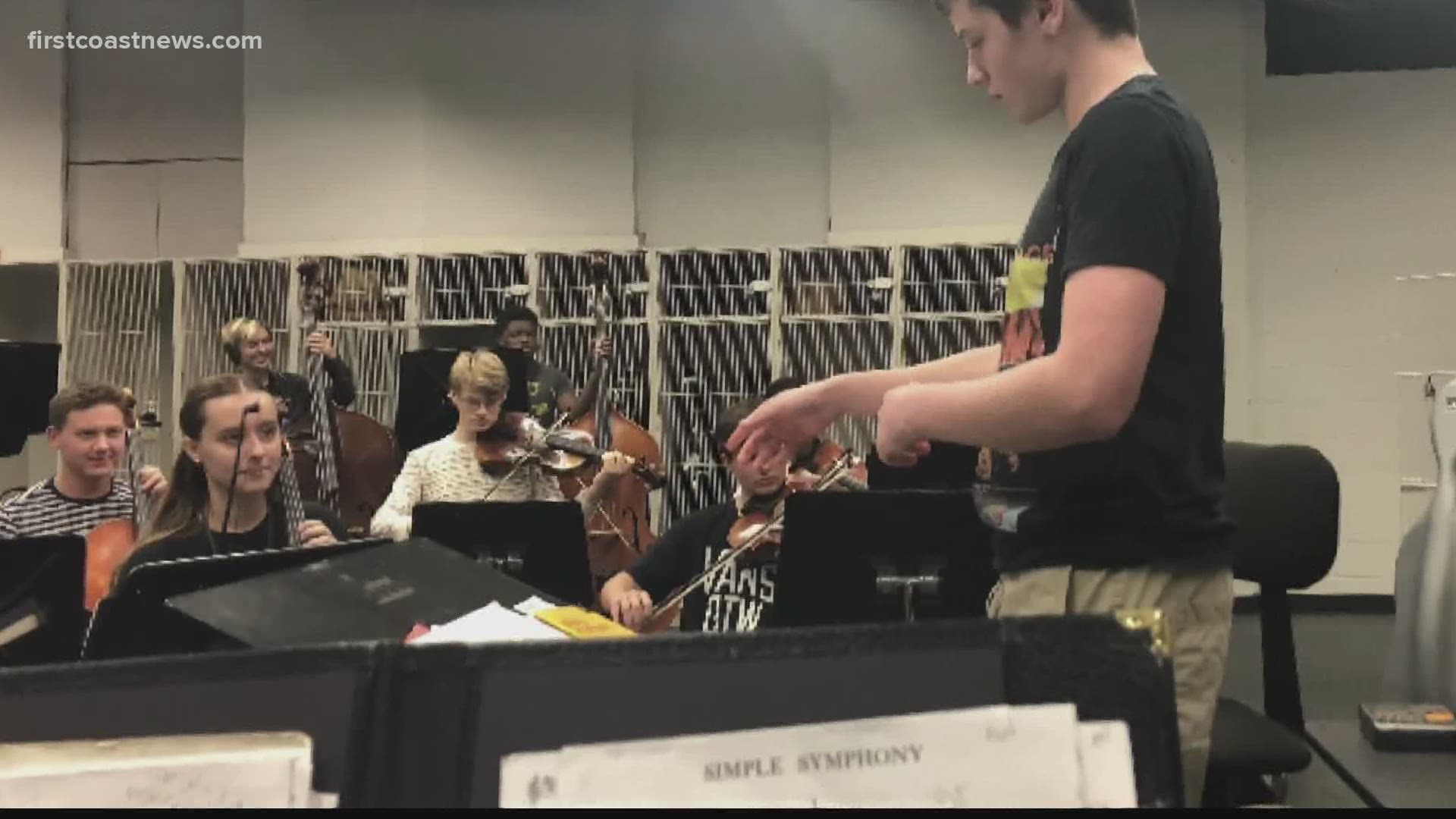 JACKSONVILLE, Fla — Groups of people and a lot of materials are things we avoid these days, but what happens when they are requirements for a class in school?

Music classes can be what get kids excited to go to school. Musicians and the music industry are suffering, but educators are determined to not let music education suffer.

"It's kind of mind blowing when I started thinking about that question because it's like 'oh my gosh!' It's really overwhelming," said Brian Griffin, an orchestra teacher at Douglas Anderson Fine Arts School and orchestra director at River City Youth Orchestra.

That question he finds overwhelming is: What is the impact music education has had on your life and your students' lives?

Griffin has 30 kids to a room.

"I've got this small little locker room where they keep their violins and violas,” he said. “Well you can't have all these kids going in there at once, so we're going to have to have all their instruments stored in different parts of the room so they don't all go in there elbow-to-elbow."

Students at Douglas Anderson tune their own instruments, but that isn't the case for younger grades.

DCPS is requiring instruments to be sanitized between students. The National Federation of State High School Associations provides guidelines on how to disinfect musical instruments.

The day-to-day adjustments will be a challenge, but what about the long-term impacts on music education? Fine arts can be the first to go in budget cuts.

“We just need to make sure our voices are heard as arts educators,” Griffin said.

He remembers what a superintendent said years ago.

"We were facing some major budget cuts and we really appreciate the fact he said that we weren't gonna gut the arts,” he said.

The last time Griffin’s students performed together they won second place in the country at the American String Teachers Association National Conference In Orlando. Griffin says it’s the most prestigious competition in the country.

“I'm blessed and thankful to have a job where I can do what I love to do," Griffin said. "I just want other kids have that opportunity, and I see kids doing that every day in my program. It's very rewarding to see them come in as freshmen and then graduate and have the opportunities with scholarships and the colleges and conservatories they're getting into. It's incredible."

Support for the arts is one reason another music teacher chose Duval schools to work in; however, she is resigning and retiring this year after 40 years in the industry.

“I'm over 60 and I have asthma,” said the teacher who wants to remain anonymous. “And I just don't ... I've got enough saved up that I'm gonna be okay for a few months."

She does not want to risk her health by interacting with multiple groups of children during a health crisis.

She believes the music will go on, and that the fact DCPS has an arts magnet school shows music education is valued.

"The arts give people a reason for living,” she said.

Others say it also gives children a reason to want to go to school.

"From my own experience and from my family’s experience we discovered sometimes being in those music groups gave purpose to being in school,” said Cliff Newton.

Newton used to teach brass at Edward Waters College. He now plays the trumpet in a band and teaches private lessons.

There are now less people in his band. At rehearsals they distance themselves and are trying out ways to stay safe.

"I've got a trumpet and you just put fabric over and it has a rubber band,” said Newton. “In fact, I'm gonna play with that and see if I can borrow a silk scarf from my wife."

Teachers are getting as creative as possible. A choral director at LaVilla School of the Arts found masks designed specifically for singers.

Teachers know the value of music education. Music engages both hemispheres of our brains at once, according to the Journal of Neuroscience. This engages visual, auditory, and motor skills and helps with memory and problem solving.

Students may not realize that while playing, but the retiring teacher's students did learn something else.

"They said the one thing I taught them was confidence," she said. "Confidence and self-assurance just because they got up on that stage that one time. That's what music does for people. Music does many things for people."

She set up a donation fund for the teacher who takes her place at her Title 1 school to give them more resources for the job she loved for decades.

"I'm really gonna miss see kids and getting hugs and kisses," she said.

Elsewhere in the community, Jacksonville Symphony staff took a pay cut in July as the symphony lost 20% of its budget. The symphony cancelled 30 concerts, streaming them online instead.

Brad Buckley, secretary-treasurer with Jacksonville’s musician's union, the American Federation of Musicians, says the pandemic has “decimated the industry.” He’s worked with a number of people who are still waiting on their unemployment benefits.

Because musicians often use 1099's and don't have traditional W-2's it’s "very difficult for them to get unemployment,” Buckley said.

Shout out to my parents and newly dubbed videographer brother for recording their practicing! They're musicians who've been doing private lessons on their WV porch. That won't be an option for Duval students next week. On #GMJ: what it'll look like & possible impacts on music ed pic.twitter.com/LfJCzGDwDW