Sixth graders will be the first back to full-time brick-and-mortar learning. 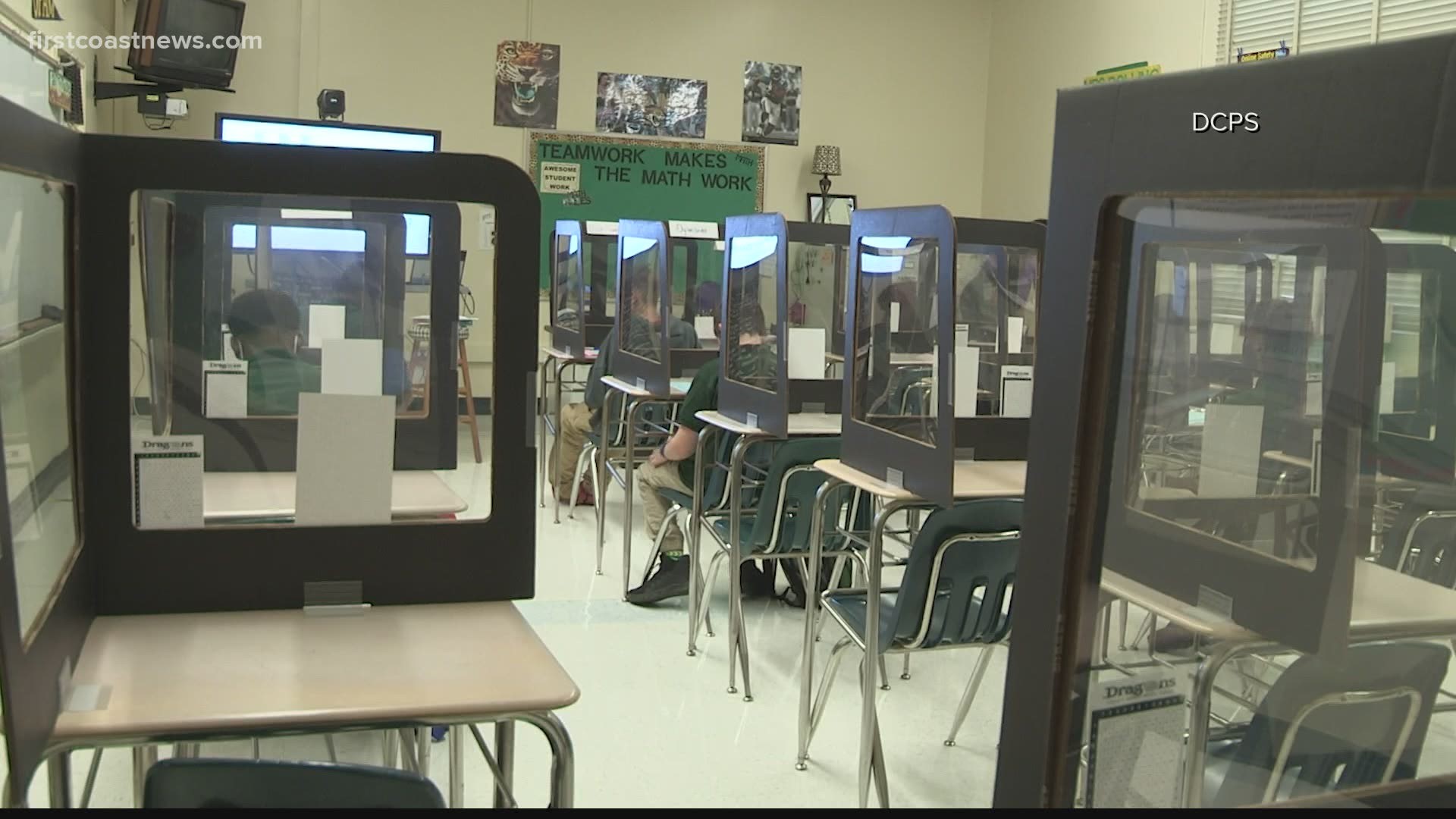 JACKSONVILLE, Fla — More students are about to be in Duval County Public Schools as the school system begins phasing out its hybrid learning model in accordance with Florida's emergency order mandating full-time, in-person learning options.

Virtual learning still exists. It is the only option for elementary students besides being in the classroom. They did not have the choice of the hybrid model.

"We received special permission to do the hybrid model in the first place, and that was really pinned to the fact that the Republican National Convention was going to be held here. That was going to be a big impact," said DCPS spokesperson Tracy Pierce.

"We have had what we're describing as a manageable situation with respect to the number of COVID cases on campus, and we believe that a lot of that in the secondary schools is because of the hybrid model," Pierce said.

It was always the plan to phase out the hybrid model but the district was considering extending the deadline; however, they needed the green light from the state to do that.

Pierce said DCPS presented a phased reopening plan that would have taken place over a longer period of time, but the state set Sept. 28 as the date for all secondary students to be back in school full-time.

"We, like all school districts in Florida, are under an emergency order from the commissioner of education to offer students a five day a week option," Pierce added. "The commissioner provided the emergency order. We're abiding by that order and collaborating with the department in terms of how we do that."

Students will head back as the district sees a slight rise in COVID-19 cases. More than 30 people in the school district, students and staff, have tested positive. Most of the schools with positive cases are elementary schools.

Meanwhile, both district leaders and union representatives have expressed concerns about the ability to social distance at high schools and middle schools, which differ from elementary in scheduling and capacity.

"I don't know how they're going to comply with the CDC guidelines and the health department guidelines for social distancing. I just don't understand how that's going to happen," said Terrie Brady, President of Duval Teachers United. "When you're talking about two or three thousand kids in a school, it's really tough to have social distancing when you have class changes and things."

Close to 90,000 students returned to brick-and-mortar schools at the start of the year, but now the middle and high schools will have more students.

Pierce said it may be possible for a student currently on hybrid to transfer to Duval HomeRoom full-time in order to avoid returning in-person, but it will depend on the school and the situation. He said it won't be easy to maintain the same schedule in that circumstance.

"It's not so much spots, it's about classes and whether or not the electives you're in right now would be available in the other format and whether that would be a smooth transition from your student," he said. "It's gonna be a student-by-student analysis of what those possibilities could be."

"With a full class load, they're not going to be able to social distance. And this virus is too infectious. Even when you're wearing a mask," he said. "This is a virus that happens once in a hundred years. We don't know the long-term effects of this virus on our children. And the other big concern is children may have no symptoms but may be carriers of this virus."

More students are about to be in @DuvalSchools as the school system begins phasing out its hybrid learning model. pic.twitter.com/OHkf1lmLM2

RELATED: How is DCPS doing so far this school year?