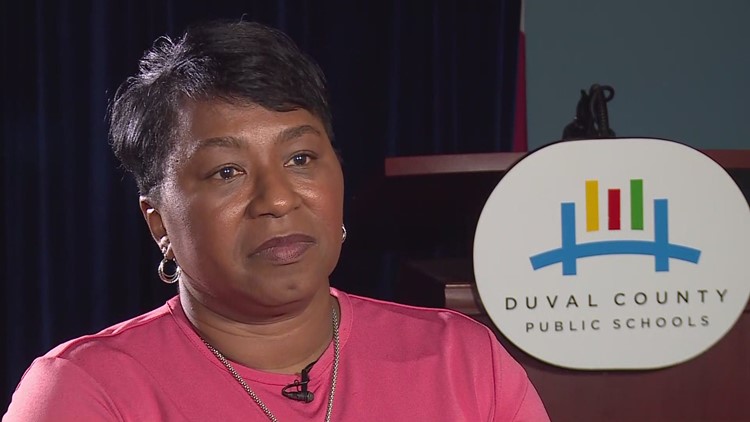 Stacy McDonald Taylor, a mother of two, has a Chick-fil-A routine.

When the air conditioning goes out at her son’s school — something she says is a regular occurrence — she logs in to the fast-food center’s app on her phone and places her standard “A/C outage order”: gallons of sweet tea, lemonade and ice for Mayport Elementary School’s exceptional education unit.

Taylor said the experience is frustrating. She’s not alone.

Data provided by Duval County Public Schools revealed thousands of incidents between April 2018 and March 2019 where the air conditioning was out inside a classroom, main office, media center, a whole building or a block of rooms.

Taylor’s son, who is on the autism spectrum, along with his peers don’t feel particularly motivated for school when the building gets hot. So the mom does her best to keep everyone cool. It’s to the point that the fast-food employees know Taylor by name.

“The Chick-fil-A on Hodges all know me and will ask, ‘Oh my gosh, is the A/C out again?’” she said. “It happens so often that I have a standing order on my Chick-fil-A app.”

According to Taylor, this school year alone, her son’s classroom was without air conditioning for two or more days, multiple times.

Air conditioning and maintenance issues play a large role in School Superintendent Diana Greene’s master facility plan recommendations, which have been in the works for six months. If the half-cent sales tax referendum is approved, the $1.9 billion plan would renovate and rebuild what are some of Florida’s oldest schools. The proposed sales tax would last 15 years and raise Duval’s sales tax from 7 to 7.5 cents.

The question remains whether Jacksonville’s City Council will give voters the chance to vote on the sales tax. That’s because while other counties proposing a school sales tax interpreted that state laws required commissions to grant a school board’s request to put a referendum on the ballot, city attorney Stephen Durden ruled otherwise.

A recent University of North Florida Public Opinion Research Lab poll showed about 75 percent of registered voters in Duval County support a half-cent sales tax to upgrade or replace aging schools. In addition, about 34 percent supported a 2019 special election. Forty-nine percent favored a 2020 general election, and 17 percent didn’t support a referendum at all.

But the likelihood of a November 2019 special election for the sales tax is growing slimmer following a City Council committee meeting last week.

At the meeting, the council’s finance committee approved an amendment to put the referendum on the November 2020 ballot instead of its own special election a year earlier. But the council’s Rules Committee deferred voting on the bill.

Despite the City Council’s next meeting being scheduled for Tuesday, no further action regarding the referendum is planned until July.

That could change. Council member Garrett Dennis on Friday requested that a special meeting of the City Council be held on Monday at 3:30 p.m. to discuss the school issue.

“I’m hopeful that the City Council will have a heart for our children and reconsider delaying this vote,” Taylor said. “We are a school-choice family. I am a strong believer in providing sustainable, diverse educational options for all of our city’s children in safe environments.”

Records provided to the Florida Times-Union revealed that from April 2018 to March 2019, Duval County Public Schools completed just under $2.5 million worth of internal work orders related to air conditioning systems. The internal work included over 9,000 orders ranging from chillers that were down, vents needing repairs, cooling tower inspections and leaks.

That internal work is only a sampling of the school district’s A/C expenses.

Duval County Public Schools spokesman Tracy Pierce confirmed most of the county’s air conditioning-related work is contracted out. In the same 12-month period, the school system outsourced about $6.7 million worth of A/C work for a total cost of about $9.19 million in one year.

The Times-Union requested detailed information about the contracted work, but the district has not yet provided the records.

Duval Teacher of the Year finalist Rachel Duff is an English for language learners teacher at DuPont Middle School. She said a student’s learning environment makes all the difference — especially since all of her sixth-, seventh- and eighth-graders are new to the United States.

“It is critical that the room in which we are learning evokes a feeling of warmth, security and welcomeness,” Duff said. “The same principle applies to entire school buildings.”

Duff, a Jacksonville resident of 20 years, continued, “It is the public’s right to make that choice of the half-penny sales tax on the November 2019 ballot.”

Click here to read the full article from our partners at The Florida Times-Union.