The Jacksonville City Council voted 14-5 to withdraw Duval County Public Schools' motion regarding a half-cent sales tax for its schools. 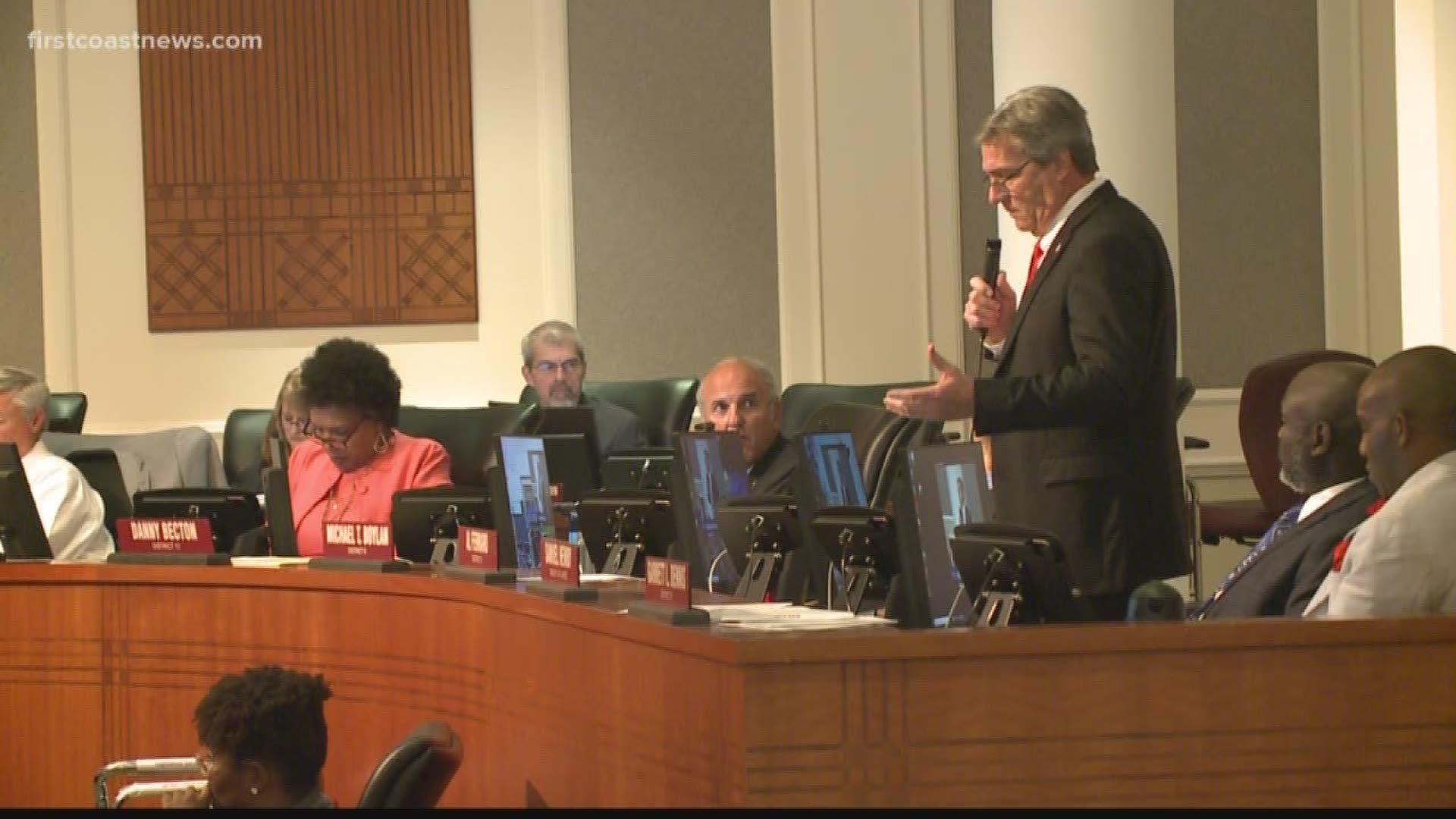 JACKSONVILLE, Fla. — The Jacksonville City Council voted 14-5 Tuesday to withdraw a bill that would have put a half-cents sales tax referendum for schools on the ballot for voters to decide.

The vote ends the consideration by the council for a referendum unless the Duval County School Board, which made its request in May for a Nov. 5 referendum, comes back at a later date and asks City Council again to put the choice before voters.

The school board will hold a meeting Wednesday in Room 613 at DCPS headquarters to discuss next steps.

The vote came during a tense meeting when Wilson, after a few too many "boos" from the audience, made the rare decision to clear council chambers during a Tuesday night meeting.

“I don’t think it means it’s the end of the road, it’s simply the next step in a conversation to get this over the mountain,” council member Rory Diamond said. “We need everyone on the same page.”

Councilmember Leanna Cumber echoed that call — at least she tried to before the "boos" prevailed. That’s when Wilson ordered called on the Sergeant at Arms to clear attendees — including school board members — from the room.

Hundreds — many clad in red shirts as a sign of support for the referendum — emptied into the atrium, which didn’t provide audio of the meeting.

Councilmember Garrett Dennis asked Wilson if School Board members and Superintendent Diana Greene could enter the room, which he agreed to.

The episode typified the tense atmosphere in the council chambers where City Council members struggled with making a decision on the School Board’s referendum request, which has been pending since May.

The council debated late into the evening, with no resolution reached by press time.

Heading into the council meeting, two City Council committee split on their recommendations. The Finance Committee voted 5-2 last week in favor of withdrawing the referendum legislation (2019-380), but the Rules Committee voted 4-3 in favor of the School Board’s request for a Nov. 5 special election.

But Duval County Supervisor of Elections Mike Hogan said too much time has passed for his office to organize a Nov. 5 election for the referendum, which would be the only issue on the ballot. Advocates of giving voters a choice this year have suggested a December date.

The School Board’s proposed half-cent sales tax would last 15 years and pay a big portion of the $1.9 billion master facilities plan approved by the board. The work would spend varying amounts at more than 150 campuses across the county, with the spending mainly focused on replacing aging school buildings that are among the oldest in Florida. Some schools with large numbers of empty seats would be demolished as the district consolidates smaller schools. The district also would seek to eliminate portable buildings at campuses where enrollment has overflowed the brick-and-mortar buildings.

The sales tax also would pay for safety and security upgrades at all campuses.

Charter schools would get the same funding of $5 per square foot for security enhancements as traditional public schools. Charter schools also could apply for grants to make repairs and renovations of their buildings, based on the same engineering criteria the School Board will use to portion out dollars for traditional schools that vary widely in age and facility conditions.

The funding for charter schools would be less than what some charter school advocates, including the Jacksonville Civic Council, have pushed for by trying to tie funding to a per-pupil formula that automatically carves out sales tax dollars that flow to charter schools based on how many students are at each school.

A majority of City Council members made comments that favored withdrawing the legislation. Other council members said the School Board’s request simply is to put the choice on the ballot so voters ultimately can decide if they want the sales tax or not.

City Council members who voted in committees last week for withdrawal said the School Board needs to have more community meetings, come forward with a year-by-year timeline for when each campus would get work, and provide equitable funding for charter schools. They also have objected to a special election for the referendum, saying a tax increase needs to be decided in a higher turnout general election.

Supporters of voting to put the referendum on the ballot say voters deserve a chance to make that choice. They point to the months logged by the School Board in hiring outside consultants who determined the facility needs at each campus, estimate the cost for fixes, and mapped out how a half-cent sales tax would bring in revenue to put the master facilities plan into action.

The school district had 20 community meetings about the plan and met in a three-hour joint meeting with City Council to field questions about it.

A legal cloud has hung over the School Board’s referendum request because the city Office of General Counsel issued a memo in early May saying state law gives City Council full authority to approve of rejecting the board’s request. That guidance, which General Counsel Jason Gabriel later solidified in a binding legal opinion, runs counter to how every other Florida county has handled such referendum requests made by school boards to their county commissions.

Whittington’s order said that discretion is not unlimited, however. He said the county commission cannot unreasonably delay setting an election date for the referendum and has no legal authority to refuse to put the referendum on the ballot.