The board split along party and racial lines in a vote on Thursday. 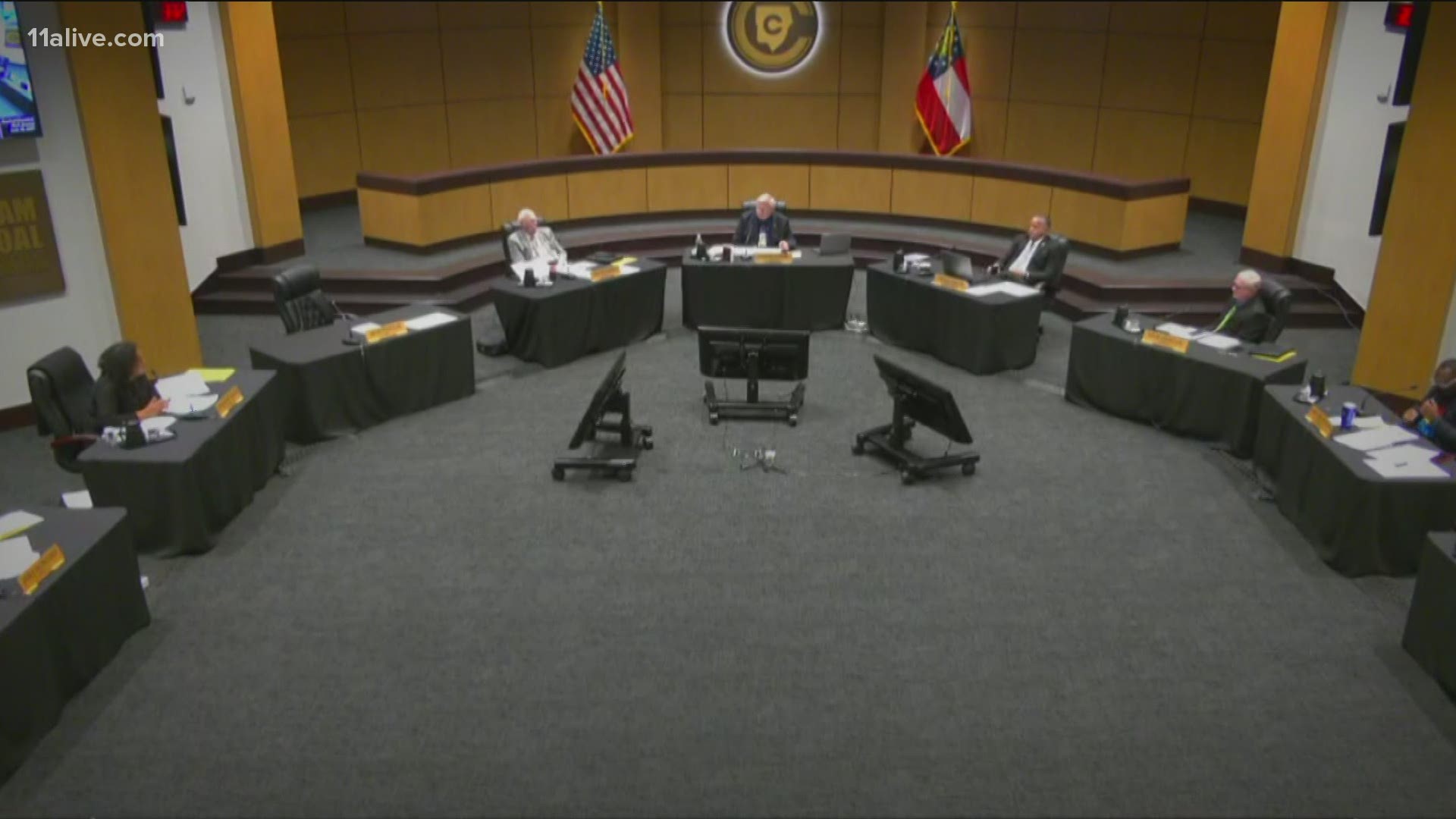 COBB COUNTY, Ga. — A debate about how to teach history and race in classrooms that's been roiling at the national and state level arrived Thursday in Cobb County with the passage of a resolution against Critical Race Theory and the 1619 Project, in a vote that split along party and racial lines.

The Cobb school board vote was four in favor and three abstaining in an apparent show of protest. The four in favor were the board's four Republicans, all white men. The three abstentions came from the board's three Democrats, one Black woman, and two Black men.

Critical Race Theory is an intellectual framework that reviews the history of racism in American institutions and contends it has resulted in a structurally biased system that advantages white people and disadvantages people of color in ways large and small.

It has recently become the target of conservatives, including Gov. Brian Kemp, who paint it as divisive and historically revisionist. Proponents argue it refocuses emphasis on well-known racial history that goes ignored or downplayed in favor of self-flattering national myths.

That was the explicit emphasis of the 1619 Project, also banned in the resolution. The New York Times series published in 2019 to mark 400 years since the arrival of slavery brought by European colonists to America sought to "reframe the country’s history by placing the consequences of slavery and the contributions of Black Americans at the very center of our national narrative."

On Thursday in the Cobb Board of Education meeting, the debate fell along similar lines.

Board member Leroy Tre’ Hutchins pressed Chairman Randy Scamihorn to define Critical Race Theory, and the chairman specifically highlighted the 1619 Project as a "revisionist history" and said he had seen CRT characterized as "Marxist, or pitting one group against the other."

Hutchins, who abstained, expressed his concern that an inadequate definition of CRT would allow people to broadly interpret what it is or is not. He pointed specifically to one longstanding county program, No Place for Hate, that had only recently been characterized as a product of CRT.

"We don't have a clue what it is, we don't have a definition," he said. "That's the danger of what is Critical Race Theory and not having a definition - we can throw anything into it because we heard it on the radio or we saw it on TV or somebody who is not educationally minded said it was a part of it. That's dangerous, we might as well start throwing books away and curriculum away."

He said there was a sufficient pre-existing policy to address teachers bringing in subject matter outside of the curriculum.

He also noted that a recent State Board of Education resolution on the teaching of race did not specifically mention CRT, while the Cobb resolution did, and questioned whether that was necessary. The chairman, Scamihorn, contended the state board resolution effectively outlined CRT in its resolution and that he wanted "to be a lot more succinct in the resolution than four-and-a-half pages."

Another central topic of the debate was whether CRT was even currently being taught in any Cobb County classrooms. Scamihorn contended that he had seen social media posts from some Cobb teachers either endorsing CRT or claiming they were implementing it into their lessons.

Board member Charisse Davis contrasted the action being taken on CRT with past treatment of claims of racism in the school system.

"We have had students, parents and staff come to board meetings and contact us via email to share their stories of threats directed at Black students, racist assignments, bigoted comments by students and staff... for all of this outpouring of grief from the people that we're supposed to stand up for the most there is no superintendent statement, no agenda item, in fact the board's public comments have always been, 'Where is the proof?'

"So I ask where is the proof that CRT... is taking over our schools?

"This is not a real thing that is happening in our schools and the time that it has taken away from real conversations about real issues is deeply troubling to say the very, very least," Davis added.

David Chastain, the only other Republican member of the board to speak on the matter, said he was endorsing the resolution because he felt the debate about how precisely to define it reflected how it would be difficult to precisely teach to younger children.

"I try to think about what's best for our children, especially thinking about kindergarten through 7th, 8th grade - some of these concepts, the way they might be taught not are necessarily constructive... I think this is an adult issue, I don't think it's a kids' issue."

Jaha Howard, the third Democratic board member, echoed Davis' question about priorities, and spoke forcefully against the resolution.

"This is a sad day for our district and this is clearly a coddling and pampering of white supremacist ideology," he said.

Scamihorn said he was amazed at the "extreme language" in that sentiment.

"I guess I'm condemned for trying to move forward be it agreed to or not," the chairman said of the resolution. "So I'll wear that scarlet letter proudly."