JACKSONVILLE, Fla.—Duval County Public Schools officials say when a law is broken and warrants an arrest, their police department will make it. 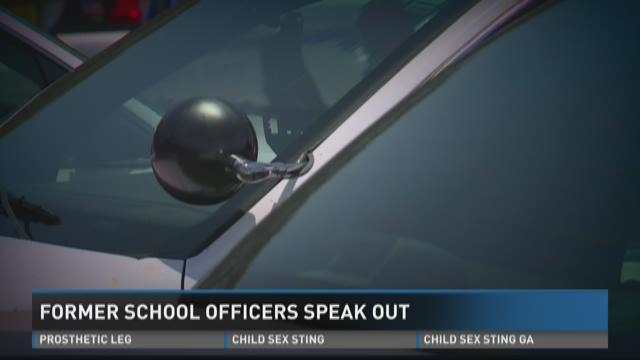 JACKSONVILLE, Fla.—Duval County Public Schools officials say when a law is broken and warrants an arrest, their police department will make it.

But two former officers who spoke exclusively to First Coast News say they're concerned about how the department handles certain students.

"I don't feel like what's going on there is the best thing," says former officer John Hardin. "I feel like some of the policies and things that have been enacted through the current administration are going to get children hurt, are going to get staff hurt and probably are going to eventually get an officer hurt."

He worked in law enforcement for 11 years before leaving the industry.

During part of his tenure with Duval School Police, he worked at Lake Shore Middle School and says he was instructed not to arrest students when he thought a student should have been arrested.

He says a school district policy prevented him from making an initial arrest when a student battered a teacher.

Instead, he says rules required him to call a sergeant and for that sergeant to call a lieutenant. That chain of approvals is not required at other law enforcement agencies.

"The elements of a crime are there; the evidence of a crime is there, but the higher authorities want to change what the crime actually is so that no enforcement action is taken," Hardin said.

The policy was written by Department Chief Michael Edwards, who declined to be interviewed for this story.

"If it went higher than that, I don't know," Hardin says. "I know it went at least that high."

The superintendent has touted the district's declining arrest numbers. He too declined multiple requests to be interviewed for this story.

He did offer a written statement saying, "Our work is not simply about 'keeping crime rates low.' In addition to general campus safety, we place a strong emphasis on education and building better relationships among students, law enforcement, and teachers to prevent incidents that may lead to arrests and life-changing consequences for young lives."

"We didn't arrest on every felony because I was told not to," says former lieutenant Benny Reagor.

Reagor worked for the department's previous police chief and retired in 2015.

"I have told my sergeants to tell my officers do not make that arrest," Reaggor says. "Go to the State Attorney's Office and file it in that manner."

The former lieutenant says efforts to reduce arrests go all the way back to 2011.

In his written statement, Vitti said he "support(s) Chief Edwards decision to further strengthen out investigative process to ensure all facts are gathered and reviewed carefully before making an arrest of any student."

Right now, the Fraternal Order of Police has five active complaints from officers against the school board's police department.