JACKSONVILLE, Fla.—A former Lieutenant in the Duval School Board Police Department says a controversial mental health law they say is being misused in the district. 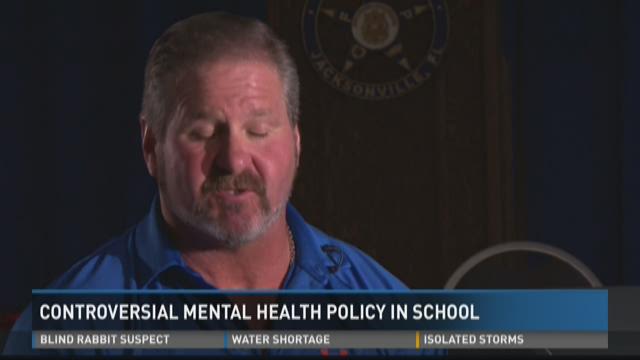 JACKSONVILLE, Fla.—A former lieutenant in the Duval School Board Police Department says a controversial mental health law they say is being misused in the district.

When he worked for the Duval School Police, he directed officers to use a controversial Florida law called the Baker Act to deal with problem students.

"I have had an officer do that before," says former lieutenant Benny Reagor. "I have made that command decision. I have said Baker Act them and don't put them in jail."

He says when a problem student is placed under the Baker Act, statistically, it's not counted as an arrest at school.

The Baker Act allows a law enforcement officer to involuntarily commit someone to a mental health facility.

"In lieu of physically arresting them for the felony, we would Baker Act the child as opposed to an arrest," he says.

Reagor worked for the department's previous police chief and retired in 2015.

"The Baker Act could give us the opportunity to have professionals who are trained make that assessment to really inform what's going on with that child,” says Dr. Lawanda Ravoira, President of the Delores Barr Weaver Policy Center.

She says the choice to Baker Act and not arrest a student could be designed to address what’s causing behavior and not to dodge accountability for a crime.

"If we only focus on the behavior, and not the trauma, the victimization, the mental health issues that may be driving that behavior, we are doing a disservice not only to that child but to our community,” Ravoira says.

Duval School Superintendent Dr. Nikolai Vitti was an Assistant Superintendent in Miami-Dade County when the newspaper there uncovered police were placing students under the Baker Act more than 3 times every school day.

The paper reported the district dismissed allegations the law was used to influence crime statistics.

"We decided that was a way that we could go to keep some of these kids out of the system,” Reagor says of his time with the Duval Schools department.

He says he used the Baker Act instead of an arrest after being told he needed to keep arrest numbers low.

Superintendent Vitti denied our request for an interview on the mental health law but sent a written statement. It says:

Baker Acting a student is not an alternative nor is it always associated with an arrest; it is a medical intervention that is initiated based on a specific criteria evaluated by either a law enforcement officer or a licensed mental health professional.