Excavated dune in St. Augustine infuriates neighbors but is legal according to state regulators 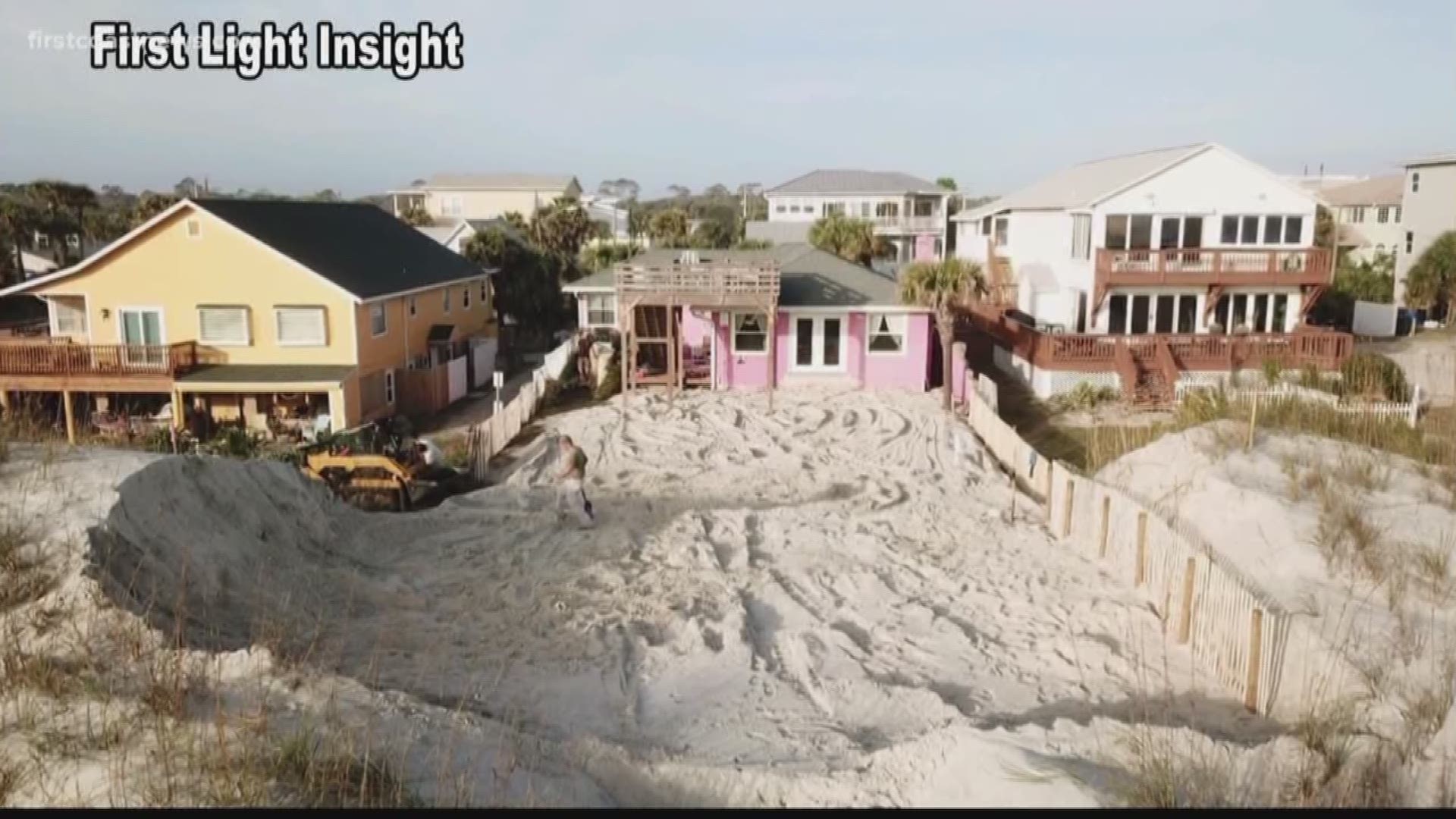 ST. AUGUSTINE BEACH, Fla. — The roar of a Bobcat excavating a dune in St. Augustine Beach elicited a louder roar of outrage from nearby residents.

Video showing sand being carved out of a two-story dune in front of a home on 12th Lane was posted on Facebook Thursday afternoon and immediately began generating furious comments.

“It angers me, disturbs me and churns my stomach,” Noah Baxter, who lives next door and posted the video, told First Coast News.

This is not the first time the homeowner bulldozed part of the dune. In 2017, Dr. James and Grace Grimes were investigated by the local police and the Florida Department of Environmental Protection for excavating without a permit. No criminal charges were filed and no fines ever levied because the homeowners restored the dune. (When First Coast News reached out to the homeowners they referred us to DEP.)

This time, however, DEP issued the permit for the removal – a fact that environmental lawyer Jane West finds shocking.

“You can’t have peepholes in the dunes, it undermines the whole coastal dune system,” West said. “This is a very shortsighted approach. It compromises the entire dune system that the taxpayers pay a lot of money for– to the tune of millions paid by the state, the Army Corps of Engineers and the county.”

A DEP spokesperson acknowledged receiving “several inquiries” about the project. An on-site inspector was there Friday and determined the project was “being performed in accordance with all regulatory requirements and permit conditions.” (DEP’s full statement is below.)

The dune is part of a decades-long beach renourishment effort financed by millions in taxpayer dollars and managed by the U.S. Army Corps of Engineers.

Beach resident Dave Bradfield says removal of the dune “is going to endanger other homes.”

“If everyone was allowed to drill the dunes down like that, all of these hundreds of millions of dollars of beach renourishment and planning will be for naught, because we’ll let morons like this tear it down.”

Baxter says he’s worried about what will happen in storms. “Oh, it scares me for sure. This is one of the houses that’s first to flood out of the whole beach here.”

Craig Thomson, a member of the city’s Sustainability & Environmental Planning Advisory Committee, says, “This endangers life and property of the city.”

As a condition of the permit, construction must not adversely affect any threatened or endangered species. But neighbors are skeptical.

“We have beach mouse footprints all over the dunes all the time,” Baxter says. There’s a pair of gopher tortoise nests right here. I see all kinds of wildlife here, and it’s just obviously is destructive. It’s beyond fathomable and I’m sick to my stomach about it.”

St. Augustine Beach City Commissioner Undine George says the city doesn’t want to see this happen again and is taking steps to make sure local officials can override similar permits in the future. “Our plan will prohibit this kind of thing from going through unless the city has involvement.”

In the meantime, she said, “We do know there will be some winds to move and migrate the sand and hopefully that dune will naturally rebuild itself.”

DEP is committed to ensuring that all beach construction activities are conducted in compliance with Florida’s environmental rules and regulations.

The Department has received several inquiries regarding construction activity at #2 12th Lane in St. Augustine Beach. The Department’s site inspector was on-site today for the commencement of the project to ensure that activities were being performed in accordance with all regulatory requirements and permit conditions. (See permit attached.) Our inspector determined the activities to date, are in compliance with our issued permit.

Excavation and sand relocation has been completed, and sand fencing has been installed seaward of the dune toe to help build the dune system.

The permittee indicates that the required vegetation planting in the disturbed area is planned for next week, weather permitting.

The department will continue its oversight to ensure this project is completed as permitted.

Additionally, for your background, the department's Coastal Construction Control Line (CCCL) program regulates construction waterward of the coastal construction control line and landward of mean high water to protect beach and dune systems, upland property and development, sea turtles and to maintain public beach access. Regulated activities include the construction of all structures such as homes, condominiums, hotels, roads, and armoring structures such as bulkheads, revetments and seawalls. Any kind of protection structure, ground alteration or vegetation removal activity seaward of the CCCL requires a permit.

State regulations and permitting rules (62B-33.005 General Criteria for Areawide and Individual Permits) are designed to ensure that the protective value of the dune is maintained. Specifically, these regulations require that activities do not alter the coastal system by:

b. Significantly interfering with its ability to recover from a coastal storm