Curling debuted at the first Winter Olympics in 1924, and could be a new club activity in Jacksonville soon. 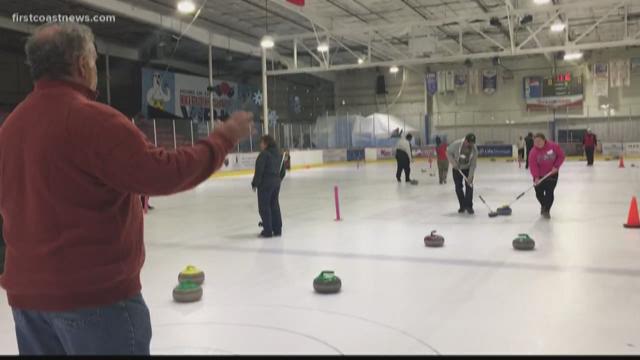 JACKSONVILLE, Fla. - The sport has been described as playing chess on ice.

Curling debuted at the first Winter Olympics in 1924, and could be a new club activity in Jacksonville soon.

“We’re the other ice sport,” Tom Merrett said about curling.

On the other side of the rink stands Barry McLaughlin, who fell in love with curling nearly 40 years ago in his native Canada.

“I’ve curled all over North America and I’ve met a lot of nice people curling. Curling is a very sociable game, it’s a friendly game and a fun game,” McLaughlin said.

The excitement is what Merrett hopes will drive more people to join a curling club he’s organizing in Jacksonville. He explained now that the city has a hockey team, interest in ice sports is rising.

“I think it’s going to be an easy sell at this point to get people interested and try it,” Merrett said.

McLaughlin, who is known as a ‘skip’ on the ice, explained how strategy is constantly adjusted.

“The game constantly changes and all ice conditions change from game to game, so it’s like a clean slate every time you never know what you’re going to get,” McLaughlin said.

Which is why the sweepers – aptly named with brooms in hand – try to control the direction of the stone.

Landing a stone in the ‘house’ scores a point. A hopeful Merrett said the First Coast could even produce the caliber of players that appear in the Olympics.

“Who knows we could have a team come out of Jacksonville because they could be here sitting, waiting to come out,” Merrett said.