An officer parked in Brittany Williams driveway in May 2020 to check emails. She asked him to leave. He refused. A scuffle ensued and she was arrested. 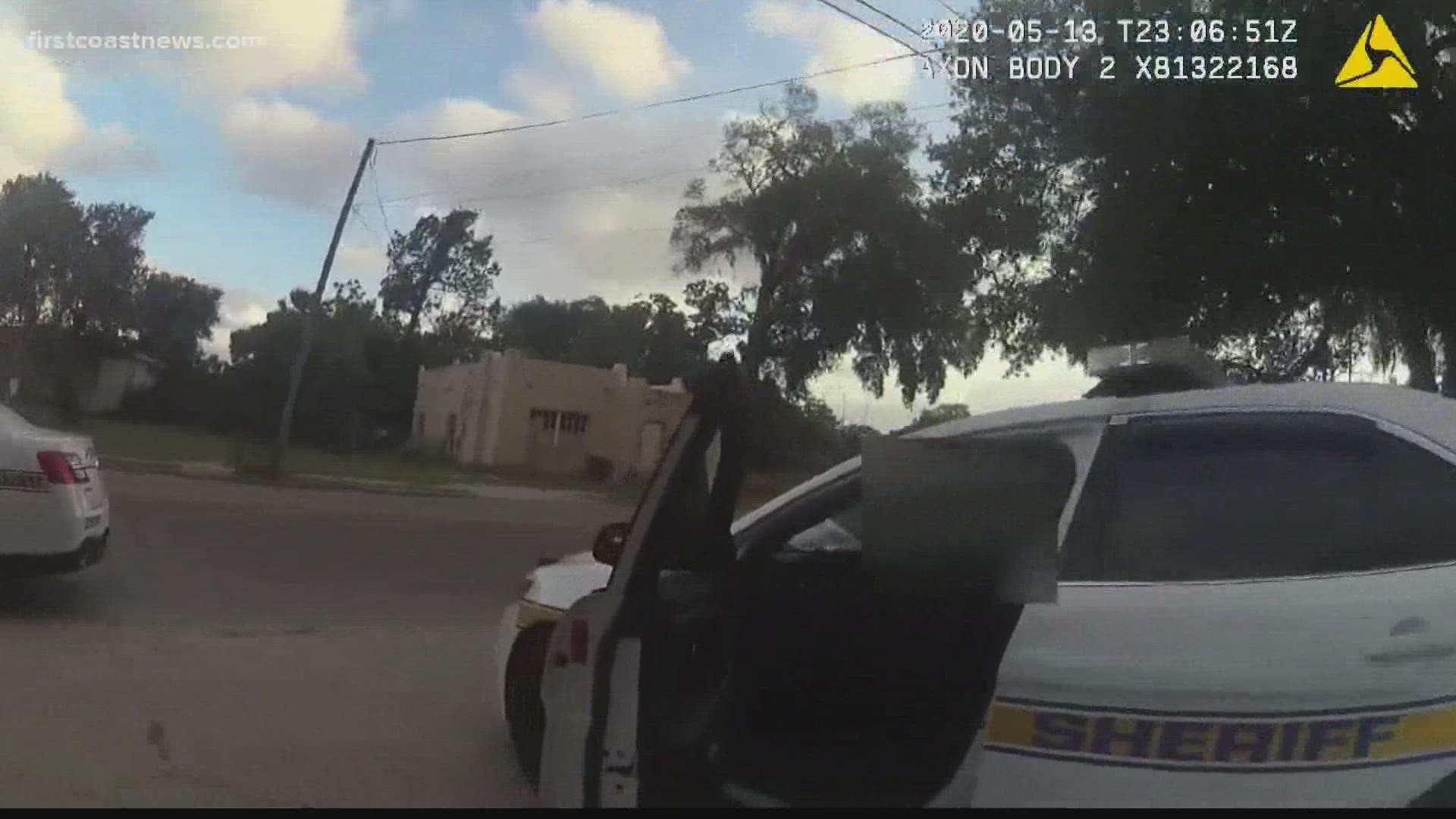 JACKSONVILLE, Fla. — A woman charged with felony battery on a law enforcement officer in an incident that resulted in her front teeth being broken has been found not guilty of that charge.

However a jury did find Brittany Williams, 31, guilty of a misdemeanor charge of resisting an officer without violence.

The incident, which was recorded on police body worn camera, went viral last year after Williams released it online in a heavily redacted format. Her version painted a picture of excessive force by police, but did not capture a 911 call in which she threatened to pull her gun on officers.

The one-day trial concluded Thursday, and she is scheduled to be sentenced today.

The incident began May 13, 2020, when Williams approached and officer whose squad car was parked in the driveway of her 21st Street home. According to the officer, he was checking emails when she asked him to leave. The officer responded that he was finishing up and would leave soon. In the police report, the officer said she “immediately threw a spoon with an unknown green substance on it at me while I was sitting in my car.” (The video suggests Williams may have been applying a green-mask facial treatment at the time.)

Williams then went inside and called 911, telling dispatchers she was scared for her life.

“We believe there are a lot of things the judge allowed into evidence which completely changed the direction of the trial. Although she was only convicted of a misdemeanor, we believe if the judge had not allowed in certain evidence, the jury would have returned a not guilty on all charges," said Jeff Chukwuma, an attorney for Williams.

Attorney Jeff Chukwuma said he plans to file a motion for a new trial week. He believes the judge was biased, and his client did not receive a fair trial.

“Not only were they allowed to mention the firearm at trial and to mention the threats, they were actually allowed to introduce the actual firearm into evidence. This case had nothing to do with a firearm," said Landon Ray,  an attorney for Williams.

“I think they probably relied heavily on the police officer’s body camera to make a decision as to how they were going to return the verdict," Mark Baughman said.

First Coast News crime and safety expert Mark Baughman watched the body camera footage and believes this is why the jury came to the decision they did.

“It was clear in what was captured on there that she was resisting arrest without violence," Baughman said. I don’t think it was total captured on there maybe the battery on the law enforcement officer, and that’s probably why they did not convict her on that.”

“As far as the actual sentence today, we have to keep in mind Miss Williams has never been in trouble in her life. She’s never even received a parking ticket," Chukwuma said.

“I do not trust him. I don’t trust white officers, especially males, and I’m here and I’m a female and young by myself. This is my home and he’s telling me he’s not about to leave. How dare he? And if I pull my gun on him and he shoot me and kill me, then, what I’m a do?”

“Ma’am, don’t do that,” the operator responded.

Later in the call, the 911 operator tells Williams to put the gun away while officers arrive. "Just to keep the situation diffused, just put the gun up for me. Okay?” The dispatcher asked.

“I will,” replied Williams.

As officers arrived, body cam footage shows Williams being tackled in her doorway, then taken, handcuffed, to a squad car. Her broken front teeth are visible in the video. Later, an officer tells William's aunt, "she did that herself."

"Either when she went to the ground or when she slapped her face on the door."

"How is she going to slap her face on the door?" the aunt asks?

Williams was given a six months probation, must undergo a mental health evaluation, receive anger management counseling and write a letter of apology to Officer David Jadlocki, who was a supervisor on scene, and to whom Williams attributed derogatory comments in her dubiously captioned video.

The Jacksonville Sheriff's Office did not return First Coast News' messages for comment.

Chukwuma said Williams has permanent nerve damage in her arm from the incident.

BREAKING: @SAO4Florida says Brittany Williams is sentenced to six months probation, must undergo a mental health evaluation and anger management, and apologize to a @JSOPIO officer in this case. I'll have comment from her attorney on @FCN2go. https://t.co/5k2CdBf9Cp

Jeff Chukwuma, an attorney for Brittany Williams, tells me he plans to file a motion for a new trial next week because he believes the judge was biased and his client didn't receive a fair trial.
"Williams has never been in trouble in her life," he said@FCN2go