New video appears to show what prosecutors say is Arbery entering and exiting a home immediately preceding the chase and confrontation that ended his life. 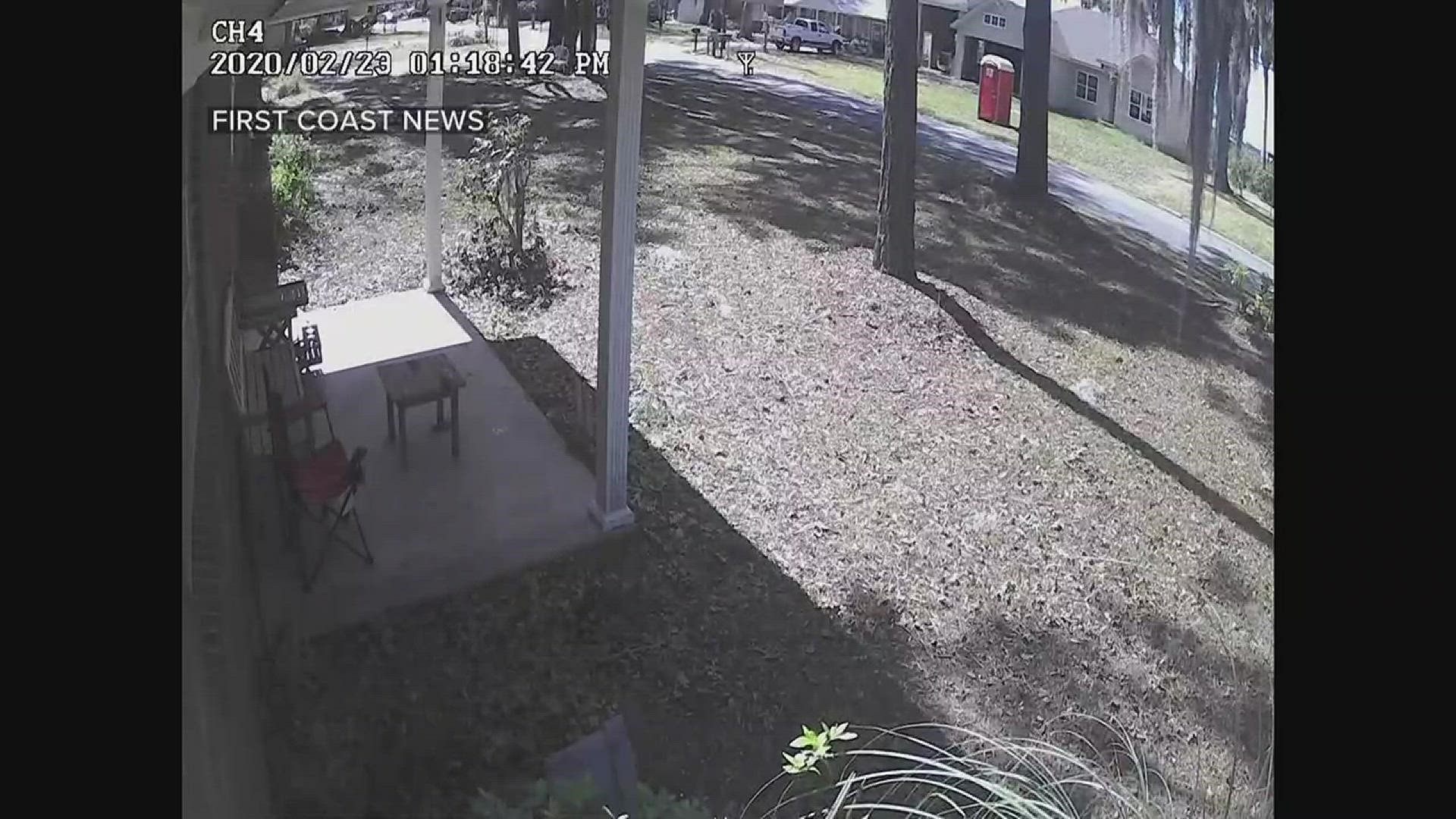 BRUNSWICK, Ga. — A new video obtained by First Coast News shows a man, whom a prosecutor identifies as Ahmaud Arbery, entering a home under construction, walking around and leaving shortly before he was shot and killed.

The 25-year-old was killed in the Satilla Shores neighborhood of Brunswick, Ga., on February 23, in a case that has since become a national controversy. A previous video released Tuesday showed Travis McMichael and his father Greg McMichael intercepting Arbery in a pickup truck as he ran down a suburban street. An altercation ensues, and Travis McMichael fires his shotgun three times. Arbery died shortly after of gunshot wounds.  Arbery was unarmed, according to police reports.

Arbery is black, the two men involved in his shooting are white. Neither were initially charged, but on Thursday both McMichaels were arrested on suspicion of murder and aggravated assault.

The new video was obtained by First Coast News by a source that asked to remain anonymous, saying he feared for his safety.

District Attorney George Barnhill, the second prosecutor to take the case before recusing himself,  sent an April 7 email noting “video of Arbery burglarizing a home immediately preceding the chase and confrontation.”

Investigators have not said there is any evidence that Arbery burglarized the home. Police reports following the killing did not note any stolen material on Arbery. There were, however, official reports, or statements from the McMichaels and their neighbors in the months preceding the shooting, reporting the theft of a weapon from a vehicle and incidents of trespassing.

Prior police reports said surveillance video captured images of the person trespassing, who was described as a light-skinned black male with short hair twists and tattoos. According to a prior police report, he had a tattoo that said “0 Regrets One Life To Live” on his right arm.

Attorneys for Arbery's family said Saturday the video clearly shows Arbery did not engage in any illegal activity.

"Ahmaud did not take anything from the construction site. He did not cause any damage to the property and was not instructed by anyone to leave, but rather left of his own accord to continue on his jog," their statement said.

The attorneys said Arbery's actions were in no way a felony under Georgia law and confirms his "murder was not justified."

Police dispatch reports show Glynn County Police Department received a 911 call on Feb. 23 at 1:08 p.m., reporting a man on the construction site, and noting there had “been some break-ins in the area lately.”

In the timestamped security camera video, a black male wearing a white shirt and tan shorts enters the frame at 2:08 p.m. and walks into a house under construction, across the street from where the surveillance camera is located.

At 2:13 p.m. on the video, the man comes running out of the unoccupied house and runs down the street. At 2:19 p.m., a police car goes down the street, followed at 2:27 p.m. by an ambulance, fire truck and two additional police cars. It’s not clear why the police dispatch log and the video timestamp reflect times one hour apart.

Previously, prosecutor Barnhill said the McMichaels’ actions were justified under Georgia’s open-carry law, and a separate state law allows a private citizen to attempt arrests if an “offense is committed in his presence or within his immediate knowledge.” He also noted Georgia’s stand-your-ground law allows someone who feels threatened “to use deadly force to protect himself,” without having to first try to retreat. 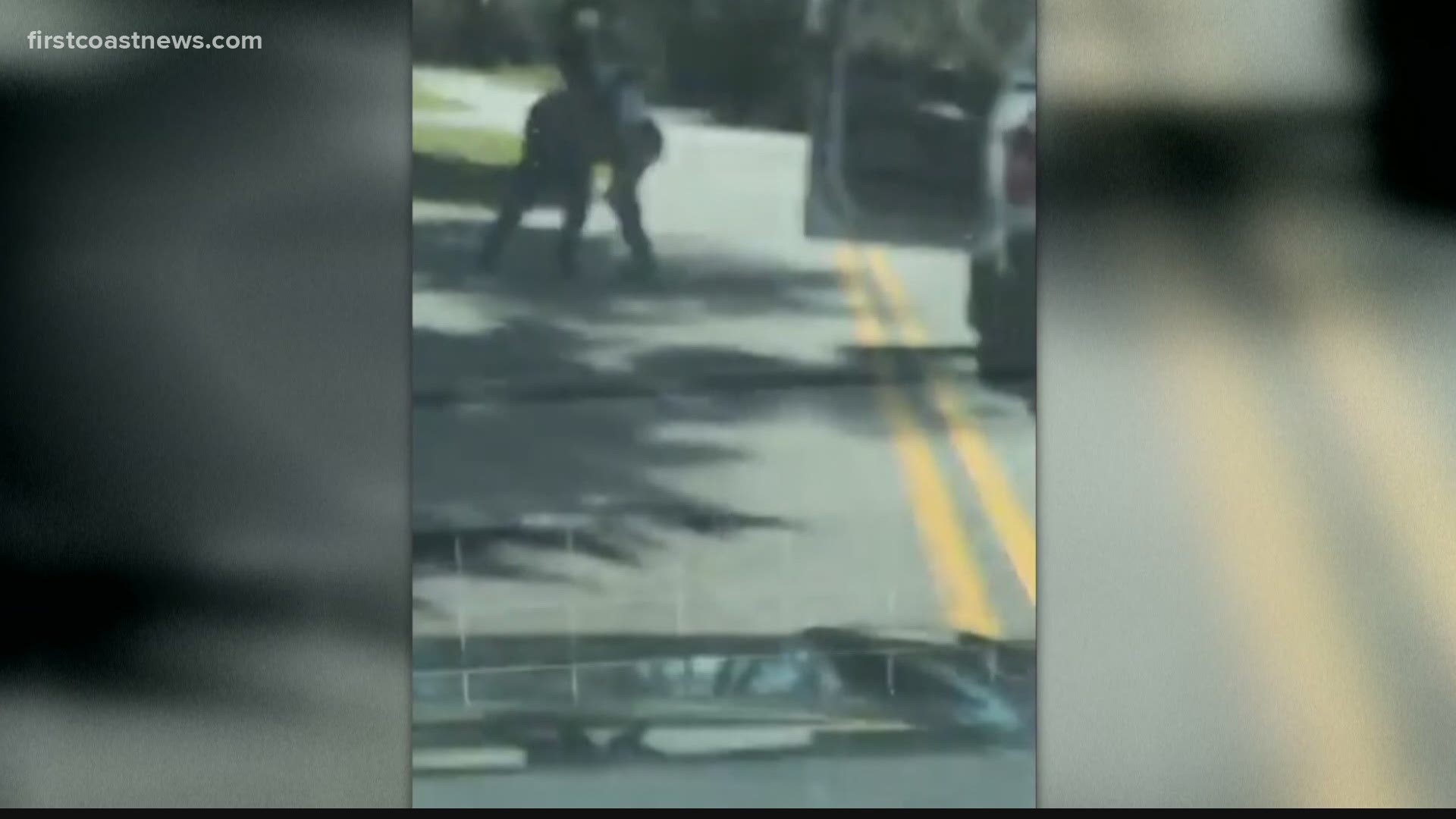 Attorneys for Arbery’s family pushed back on that interpretation, however, noting that a felony crime is required before the citizen arrest statute can be invoked.

“The only thing they have ever said is ... that Ahmaud stopped by a house that was under construction and he looked through the window,” Civil rights attorney S. Lee Merritt said. “We don’t know if that happened or not, but even if that did happen, that is not a felony that would invoke the citizen’s arrest statute that would make this allowable.”

The Georgia Bureau of Investigation said Saturday it saw the video before the McMichaels were arrested.

The case has been marred by controversy emanating from potential conflicts of interest.

First Coast News reached out to Arbery’s family and their attorneys before publishing this story.

We chose to post the entire video clip provided, which is 22 minutes long. The man is first seen entering the frame at 13:31 in.

RELATED: 'They were performing a lynching in the middle of the day': Family of slain Brunswick jogger calls for justice after video leaked