Three suspects in Ahmaud Arbery murder case plead not guilty in court Friday, no bond set for any of them

The three suspects had an arraignment and a motion hearing regarding three new motions filed on behalf of William Roddie Bryan Friday. 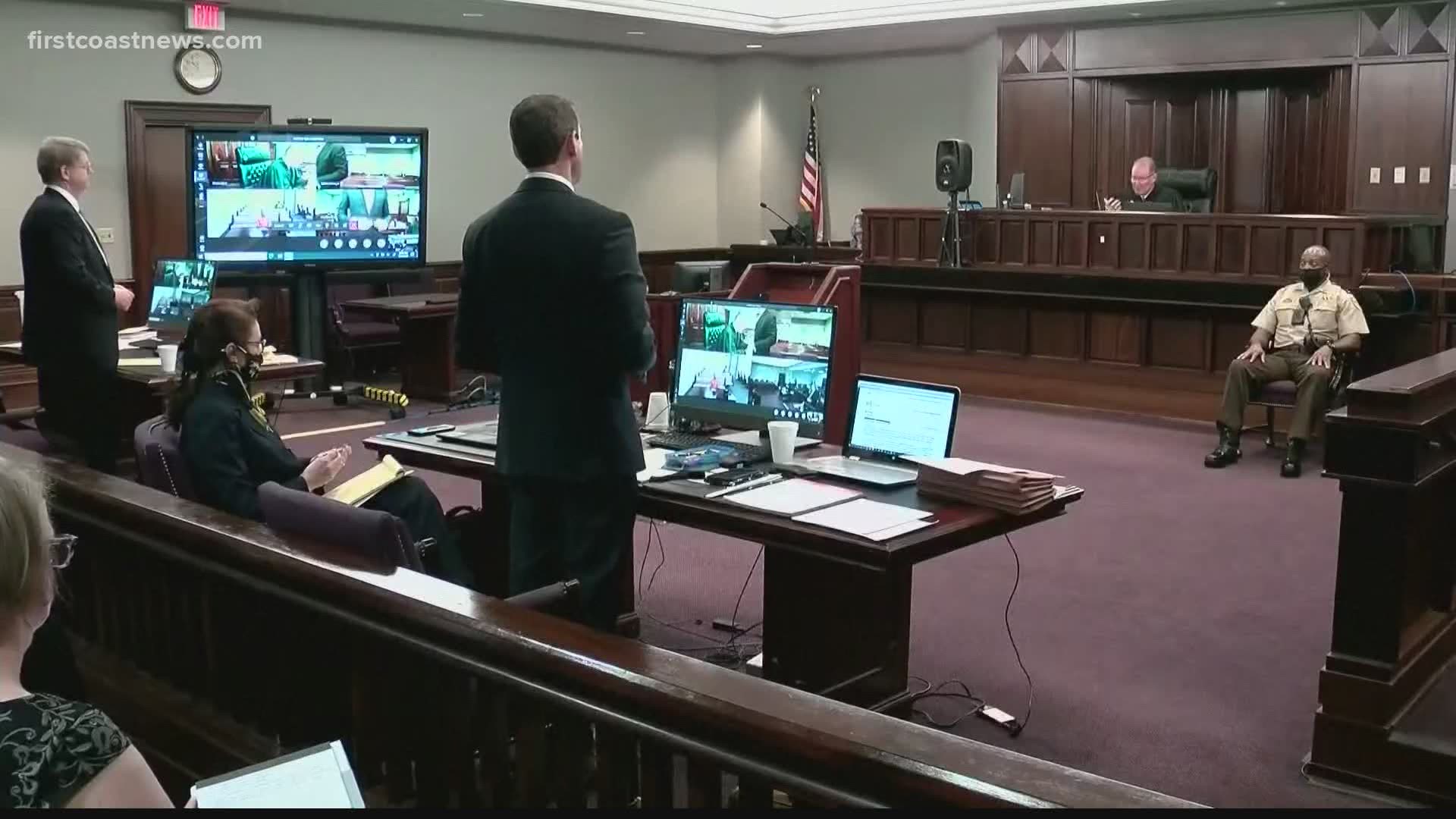 BRUNSWICK, Ga. — All three men charged in the killing of Ahmaud Arbery pleaded not guilty before a judge Friday. Travis and Gregory McMichael pleaded not guilty to the nine charges against them, including malice murder. The McMichaels and their attorneys appeared remotely through a webcam.

William Roddie Bryan, the man who filmed the video of Arbery's death, also pleaded not guilty to the nine charges against him. He was brought in front of the webcam in the jail after the McMichaels to maintain social distancing.

During the hearing, the Georgia Bureau of Investigation announced Bryan is the subject of a sex crimes investigation. According to Cobb County District Attorney Joyette Holmes, this was discovered in the course of the investigation into Bryan related to the Arbery case. The Camden County Sheriff's Office has jurisdiction in the case, according to the GBI.

After Bryan pleaded not guilty, the three motions filed on his behalf by his attorney, Kevin Gough were heard. The first motion, "relief from prejudicial and inflammatory statements made by individuals purporting to speak for the victim and his family, and for other relief," was abandoned. The State and Gough confirmed they agreed the State won't leak or share important information regarding the case. The State said it has never done this before. Gough said he will file the motion again if it is relavent.

Regarding the motion to strike down the "illegal appointment of Joyette Holmes as District Attorney Pro Tempore," the judge denied this motion. Gough arguged Attorney General Chris Carr "overstepped his legal authority under Georgia law" by appointing Holmes. He said the former DA, Tom Durden, didn't reference any interest or relationship disqualifying him in his recusal letter.

The State argued it was "an attack on the statute, an attack on the AG's office and it is wordplay." The State said interest can be interpreted many ways and also can mean the lawyer didn't have the resources for the duties at hand, which is what happened in Durden's case. The State said Gough and Bryan don't get to pick their prosecutor.

"We are ministers of justice," Holmes said later addressing the motion. "I take it as a compliment to this team," she said.

Regarding the motion of request for bond, Arbery's mother gave an emotional plea to the court in a victim impact statement.

"He [Bryan] wants this court to allow him to go home," Wanda Cooper-Jones said.

Cooper-Jones went on to say Bryan "conspired" with the McMichaels to kill Arbery. she said Bryan and the McMichaels lived feet from where her son was killed and she lived a few miles from there. She said she was "scared to stay inside her home," and ultimately put her home up for sale. She said she was also afraid of running into the suspects each time she visited the spot her son was killed before they were arrested.

"What is there to stop him from doing this again? He doesn't think there's anything wrong with what he has done," she said. "He is dangerous and unapologetic," Cooper-Jones said.

Gough argued Bryan has job opportunities and needs to be released to put his life back together. Gough said he is not a threat to the community. He used Bryan's son, who is in his 20s, as a witness. His son said his father "probably" has a job if he's released as a mechanic, and would follow protocols if he was released, like house arrest.

The State disagreed with Gough. They argued Bryan used his truck as a weapon against Arbery, said phone records show he used the n word and other racial slurs frequently and said Bryan's ex-wife lives in Costa Rica, which Bryan's son confirmed, so he could be a flight risk.

The judge denied bond and said Bryan as a flight risk is his biggest concern. He also noted possible pending federal charges and the new sex crimes investigation by the GBI.

No trial date has been set yet, in part due to COVID-19 restrictions. The judge said when they can move forward, they will.

On Friday morning, the men accused in the shooting death of Ahmaud Arbery will appear in court again in Georgia for an arraignment hearing.

Travis McMichael, his father Gregory and William Roddie Bryan will be formally charged at the hearing.

Chatham County Superior Court Judge Timothy Walmsley could post a bond for the three men. A grand jury indicted the three on nine new charges each, including malice and felony murder, last month.

Arbery was killed on Feb. 23 after Travis and Gregory McMichael pursued him in their truck while he was running in the neighborhood. According to a police report, Gregory McMichael said they thought Arbery was a burglar and that Arbery attacked Travis before Travis shot Arbery.

Bryan filmed the video of the incident. He was arrested on May 21. Bryan was driving behind Arbery as Arbery was running on a street in the Satilla Shores neighborhood where the McMichaels and Bryan lived. According to an arrest warrant, Bryan tried to “confine and detain” Arbery using “his vehicle on multiple occasions” before Arbery was shot.

The notice of the hearing, scheduled for 10 a.m., said the hearing will also address three motions filed by Bryan’s attorney, Kevin Gough.

The first, filed June 24, is an amended motion for bail. Gough asks that bail be set in a reasonable amount. He said Bryan “poses no significant threat or danger to any person, or to the community, or to any property in the community.” Specifically, Gough said Bryan has already lost his job and his home, but he has employment prospects if he is released. “The interests of justice are consistent with affording Mr. Bryan the opportunity to put his life back together,” Gough writes in the motion.

The second motion, filed June 4, seeks to strike down the “illegal appointment of Joyette Holmes as District Attorney Pro Tempore.” Cobb County District Attorney Joyette Holmes is the specially-appointment prosecutor in the case. Gough states the filing is “pursuant to the Fifth and Fourteenth Amendments to the United States Constitution,” and parts of Georgia’s constitution.

VIDEO: Surveillance video in Ahmaud Arbery case appears to show what happened moments before his death

Gough said in the motion the previous DA in the case, Tom Durden, didn’t give sufficient grounds for disqualifying himself from the case, because Duden’s letter of recusal “does not reference any ‘interest or relationship’ requiring disqualification.’” Therefore, Gough said,  Attorney General Chris Carr “overstepped his legal authority under Georgia law” by appointing Holmes.

Durden recused himself in a letter to the attorney general in May. He was the third DA on the case. Glynn County DA Jackie Johnson and Waycross DA George Barnhill both recused themselves due to conflicts of interest related to Gregory McMichael, who had worked for the Glynn County DA’s office as an investigator.

The third motion, filed May 27, asks for “relief from prejudicial and inflammatory statements made by individuals purporting to speak for the victim and his family, and for other relief.” Gough writes in the motion that individuals saying they’re speaking for Arbery or his family “continue to make malicious, prejudicial and inflammatory statements to the national media about Roddie Bryan.”

Gough said in the motion statements have been made to the effect that Bryan is a ‘devil,’ a ‘stooge,’ ‘racist’ and even a ‘psycho.’” The motion said Bryan “committed no crime and has fully cooperated with law enforcement agencies,” and is a “key witness.”

Gough writes that facts about the case have been leaked to the media, information, he said, could have come from the State. He said the DA has made “no overt effort to reign in the malicious, prejudicial and inflammatory statements that continue to be put out.”

According to an updated witness list filed July 16 for the motions include DA Tom Durden, DA Joyette Holmes subject to a State motion and Lee Merritt, the attorney for Arbery’s mother.

In a letter to Merritt, Gough says: “Please be advised that your actions and statements about Mr. Bryan amount to libel and slander within the meaning of Georgia law.” Gough goes on to cite posts made on Merritt’s social media. Gough said, “your statements, made with evident actual malice, have needlessly placed the lives of Mr. Bryan, his family, friends and neighbors in jeopardy, and effectively destroyed his life.”

VIDEO: Moments before Ahmaud Arbery was gunned down in Georgia

Gough subpoenaed Carr as a witness for the motion hearing as well, but his office filed a motion to “Quash Subpoena.” That motion said it is “unduly burdensome given the nature of his role as a constitutional officer and the issue that is presently before the Court.” The motion said Bryan has no standing to challenge the prosecutor in his case. Another witness, however, is appearing in the place of Carr, so Gough withdrew the subpoena for Carr, and in turn, the motion to “Quash Subpoena” was withdrawn.

Regarding the subpoena for Holmes as a witness, the State objected to it in a brief filed July 14. The brief cites an email exchange between Gough and the DA’s office regarding the subpoena. The DA’s office writes back, “there’s no need for you to have her personally served. In fact, considering currently implemented security measures here in Cobb, we advise against it … The State will object to her being called as a witness should you attempt to do so. But, she will be there.”