'There's a reason they're trying to hide': Expert analyzes why Kim Kessler had so many fake names

On Friday, deputies further revealed that Kessler was tied to 18 different aliases and that she's lived at 33 different cities. 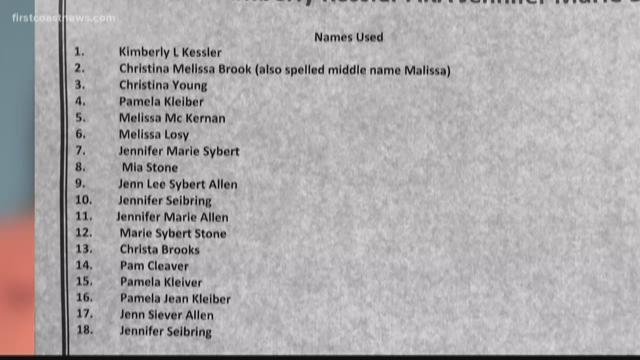 Twenty days have passed and there's still no sign of 34-year-old Joleen Cummings, the mother of three who was reported missing from Nassau County on Mother's Day.

An employee from the hair salon she worked at, Tangles Hair Salon in Yulee, was arrested and facing grand-theft auto charges tied to her disappearance.

The Nassau County Sheriff's Office revealed last month that the employee, Kimberly Kessler, was going by a different name: Jennifer Sybert. On Friday, deputies further revealed that Kessler was tied to 18 different aliases and that she's lived at 33 different cities.

“There is a reason that they’re trying to hide who they actually are,” said former FBI assistant special agent Tori Chrabot said.

Chrabot said the first question is why someone would use so many aliases.

“This person has either been involved in other crimes where they’ve stolen actual papers of someone else, they have corrupted someone within a system somewhere or they have been able to talk their way around having to provide the necessary documentation to obtain the different aliases," Chrabot said.

In this case, with Kessler using over a dozen names and living in multiple locations, Chrabot said investigators will be looking to see if any of those other names link up to other crimes similar to the disappearance of Cummings.

“You have the ID fraud with that many aliases [which] means that someone has been doing this for a while and the questions that come to mind for me: 'Where have they been, what have they been doing, when were they there and really trying to link all these aliases together,'" Chrabot said.

Nassau County Sheriff Bill Leeper still hasn't released why they think Cummings is not alive, but he did say once the evidence comes out, the community will be shocked.