Seattle police are looking for two suspects connected to a deadly shooting in downtown. A third suspect who was shot was arrested. 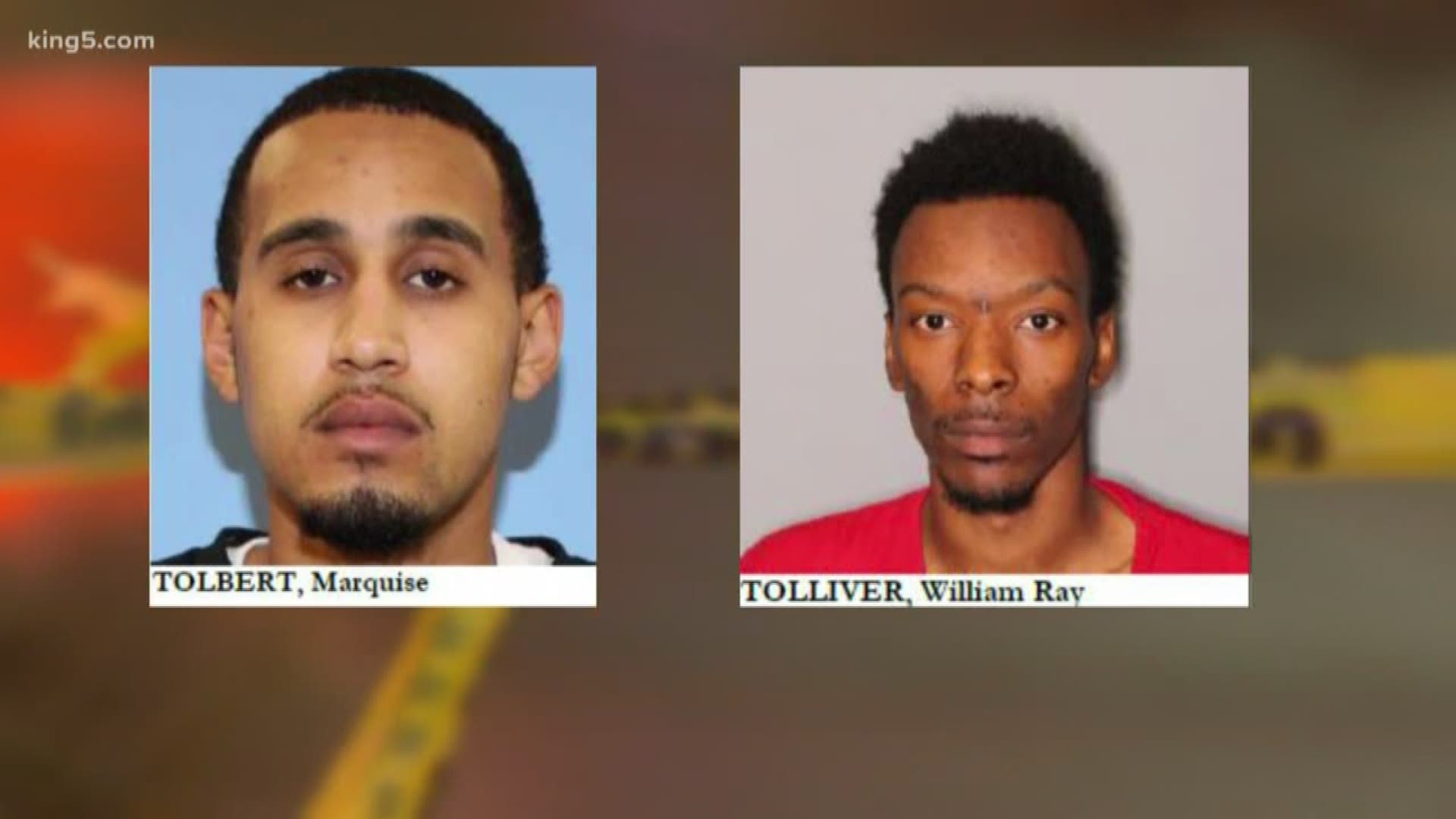 SEATTLE — Police identified two suspects believed to be connected to a deadly shooting in downtown Seattle on Wednesday evening. A third suspect who was shot and treated at Harborview Medical Center was later arrested.

Court records indicate all three men have ties to gangs in the area.

One woman died in the shooting and seven people were wounded, including a 9-year-old boy.

Police are looking for Marquise Latrelle Tolbert and William Ray Tolliver. Both men are 24 years old and are considered armed and dangerous, according to police.

Both Tolbert and Jackson were charged in the same drive-by shooting in July 2018 in Kent.

The third suspect, who is in custody, was identified in court documents Thursday as 21-year-old Jamel Jackson.

Jackson is a known gang member, according to Chief Best. He was convicted for robberies in 2012 and arrested again in 2017 for a fight outside the same McDonald's of Wednesday's deadly shooting. In that case, he was sentenced to four months of work release.

After Jackson was treated at the hospital, he was booked into jail for unlawful possession of a firearm.

Chief Best spoke at a press conference Thursday reassuring the public that while this shooting is alarming, Seattle as a whole is safe.

"Seattle is one of the safest major cities in the country," said Chief Best. "Major cities everywhere are dealing with issues of gang and gun violence, we are not immune to that. But in comparison, we are a very safe city on this very issue."

“As a police department and as a community we must work together to not allow something like this to ever, ever happen again,” she said.

The woman who died has been identified as 50-year-old Tanya Jackson.

She was a tenant at Plymouth Housing, a non-profit that helps people experiencing homelessness improve their lives.

Another shooting victim, a 55-year-old woman, was also a tenant at Plymouth Housing and remains in serious condition in the Intensive Care Unit.

A spokesperson for Plymouth Housing said in a statement, "As part of our permanent supportive housing model, our buildings become close-knit communities; these women were like family to many. Our hearts go out to the families, friends, and neighbors of all the victims.

The 9-year-old boy who was shot in the leg was treated at Harborview Medical Center and released on Friday.

A 32-year-old man who was shot remains in satisfactory condition at Harborview.

Four men ages 34, 35, 49 and the 21-year-old suspect were treated and released, according to hospital officials. The suspect was taken immediately into custody.

Two Amazon employees were among the injured and treated for non-life threatening injuries, according to an Amazon spokesperson. Both employees were outside the Amazon building on 3rd Avenue and Pine Street at the time of the shooting.

Amazon said it will be increasing security in and around the office building to ensure employees remain safe.

Chief Best said the public can expect to see police officers near 3rd Avenue and Pine Street until further notice.

Seattle police ask if you have any information about the suspects, photos, or video evidence of the shooting to call their tip line at (206) 233-5000 or share at this link. 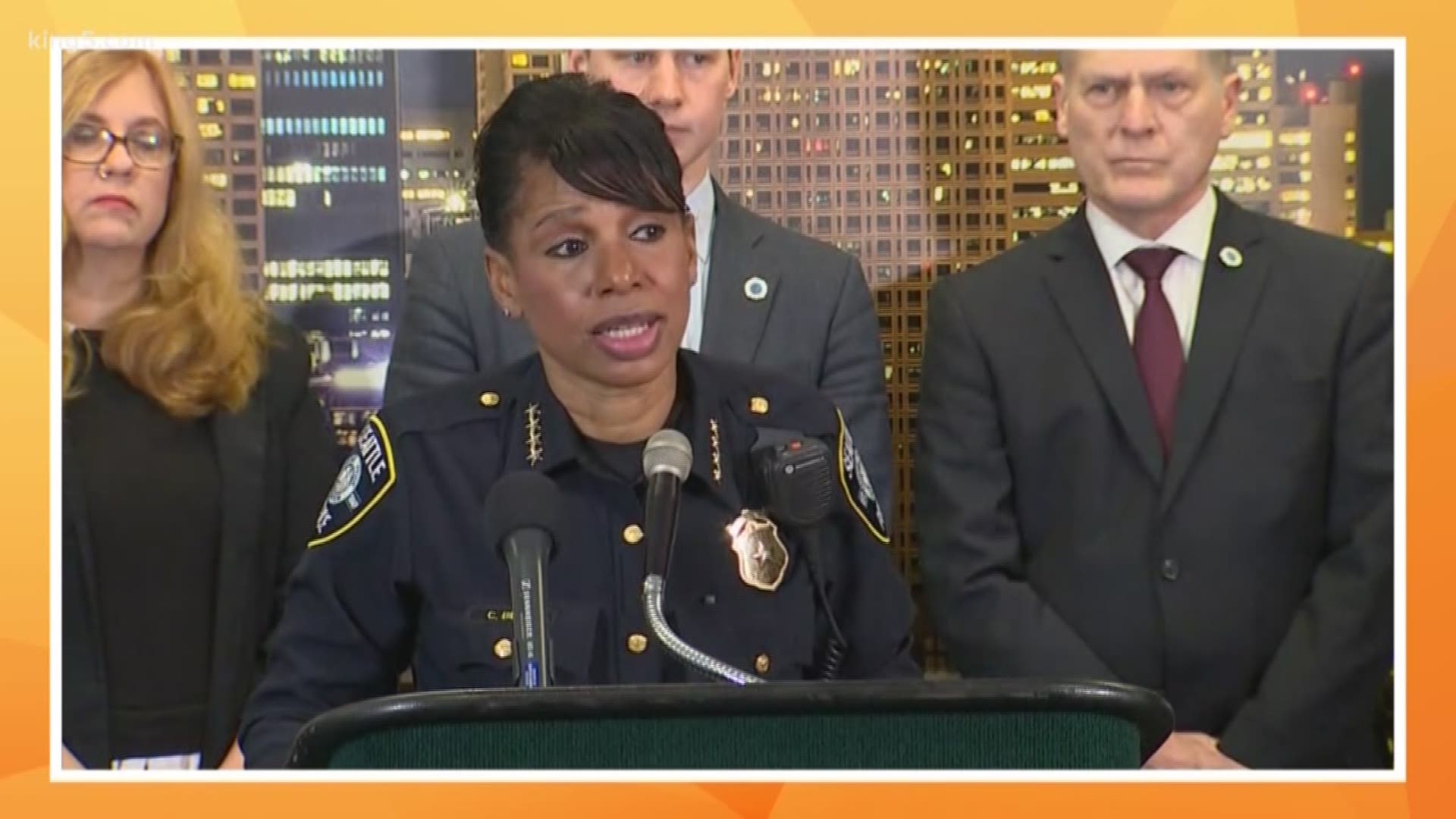