Debra Hunter submitted 23 pages of threats and profane insults to demonstrate the backlash she endured. "I deserve it. My children do not."

JACKSONVILLE, Fla. — "My kids should not have to pay the price for my mistake."

Citing thousands of text messages, emails, social media postings and "even hand-delivered letters," the woman now widely known as "the Pier 1 cougher" asked a judge to consider the backlash she has endured since the June incident.

Debra Hunter said her children "continue to suffer indignities caused by my mistake [...] embarrassed, chastised and mocked by both their peers as well as adults. Each of my three children have lost nearly every friend they had."

The viral video captured Debra Hunter deliberately coughing on a fellow shopper at the Town Center mall in anger. Hunter was not wearing a mask; the woman she coughed on was a cancer patient.

Hunter was subsequently charged with misdemeanor assault. She faces up to 60 days in jail, and County Judge James Ruth appears inclined to sentence her to at least some jail time, having rejected prior settlement deals for probation only.

In a three-page letter to Duval County Judge Ruth, Hunter said she was not seeking "mercy" but instead wanted him to understand what led up to the incident and the intensity of the backlash she and her family endured.

She said the family underwent a series of traumatic events in the months prior, including a near fatal boat accident and a house fire that destroyed their home and most of their belongings.

On the day of the incident, she wrote:

"My daughter was alarmed when she noticed a stranger recording the three of us with her phone. Admittedly I was immediately infuriated and demanded this customer to stop filming my kids. In the heat of the moment, I over reacted in an over protective manner which ultimately led to my retaliation on this stranger, the victim. And that highly regrettable, split second, knee jerk reaction has cost my family dearly."

Hunter then submitted 23 pages of messages she received as the video gained international traction.

"You are disgusting," wrote one. "Kill yourself.'

"Despicable, vile skank," wrote another. "I hope your whole family gets COVID and suffers immensely, then dies."

Another wrote from London, "Your children should be ashamed to have such a disgraceful, pathetic, brain-dead retard as a mother. F*** you."

Until that day, Hunter said, her house was a gathering place for neighborhood children. But "that semi idyllic life came to a screeching halt. [...] We no longer take family bike rides around the neighborhood. We no longer wave at neighbors passing by."

She compared the stain of her act to wearing a Scarlet Letter.

"I realize this all may sound like a bad movie script," she continued. "I assure you, I never thought I would be playing a starring role in a social media feeding frenzy."

Hunter also gave the judge three letters of support from women who attested to her good character. One said that “video was highly edited and did not show the entire story," but said that the experience "indescribable" shame.

Another wrote that she was “not surprised” when she saw the video, because in the days before the Pier 1 accident, her friend “had reached a level of negativity and drama that would be characterized as toxic.”

She added, “It was only a matter of time before something happened.”

A third woman, who also testified Wednesday at the first part of Hunter's sentencing hearing, asked the judge to "empathize with how it must be for her to attempt to move forward each new day in the relentless court of public opinion."

Hunter, though contrite, alluded to this in her own letter to the judge, saying, "I often wonder what it would be like if every one of us, as the flawed human beings we are, had their worst moments reduced to a short video for all the world to see and judge."

Hunter's next sentence hearing is scheduled next month.

RELATED: Watch Live: Sentencing to begin for woman who coughed on cancer patient in Jacksonville Pier 1

Read the full letter below: 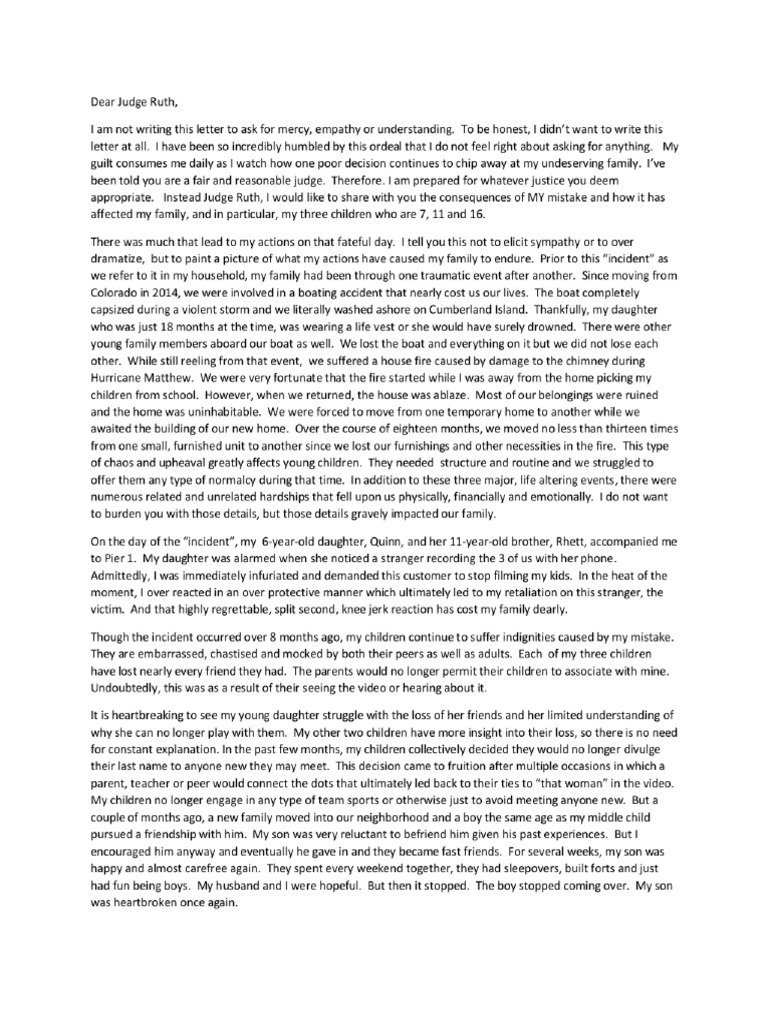