"This is taking longer than we thought it would," Circuit Judge Mallory Cooper told courthouse staff late in the day. 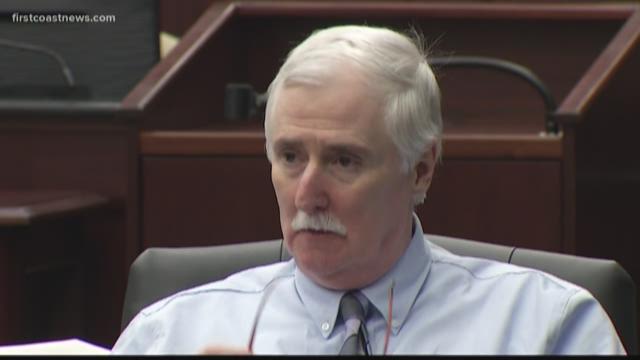 JACKSONVILLE, Fla. - Day two of jury selection in the Donald Smith trial was an exercise in grinding procedural work broken by moments of real drama: a reminder of how viscerally some in Jacksonville feel about the case.

Three hundred people have been called as potential jurors, and dozens were brought up for individual questioning. By 7 p.m. Tuesday, attorneys had approved 67 to move to the next stage of jury selection; at least 10 more than that were dismissed for bias or hardship.

“This is taking longer than we thought it would,” Circuit Judge Mallory Cooper told courthouse staff late in the day.

Smith is accused of kidnapping, raping and killing 8-year-old Cherish Perrywinkle in June 2013. It’s a case that drew intensive media coverage at the time and, as his attorneys noted several times Tuesday, has been the subject of much recent coverage.

The girl’s image was shown in court for the first time Tuesday, provoking strong reactions from one juror, and some pushback from prosecutors.

Smith’s attorney Julie Schlax held a picture of the child as she questioned one juror. The man, who had already expressed reservations about serving on such a difficult case, fought back tears as he looked at it, asking, "Is that the one in question?"

Assistant State Attorney Mark Calliel complained about the use of the photo, which Schlax previously received permission to use, saying it was being used to inflame jurors. The judge seemed to agree. Although Judge Cooper previously granted permission to show the photo to prospective jurors, she asked Schlax to limit how much she displayed the photo.

But that was not the only photo that caused concerns. The same juror said he was extremely “squeamish” about having to look at gory photos. Schlax told him the trial would involve “the most graphic photos you could possibly imagine.” Both autopsy and crime scene photos will be shown to jurors.

At least one other juror grew tearful under questioning. The grandmother of two said she was particularly sensitive to crimes involving children, and would “lose it” at trial, “especially if I have to look at pictures.”

Both jurors were ultimately dismissed. Others were sent home because of their deep personal beliefs: Either they could not administer the death penalty, or they seemed determined to do so.

“Depending on how they died, they should get the same kind of thing -- an eye for an eye," said one prospective juror.

Another said a co-worker told him he should "kill the bastard" when he learned he'd been called to jury duty.

Other potential jurors seemed daunted by the moral dimensions of the job ahead. One said the death penalty had seemed an abstract concept, “until I put the badge on and realized the potential of my decision.”

Smith faces life in prison or death – an issue to be resolved at the trial’s penalty phase, if he is convicted of murder, sexual battery and kidnapping.

The judge said she would like a pool of 80 prospective jurors to begin a more traditional jury selection, known as voir dire.