Chuck Mulligan, a spokesperson for SJSO, said the incident happened at Howard Johnson Hotel near I-95 and SR-16. 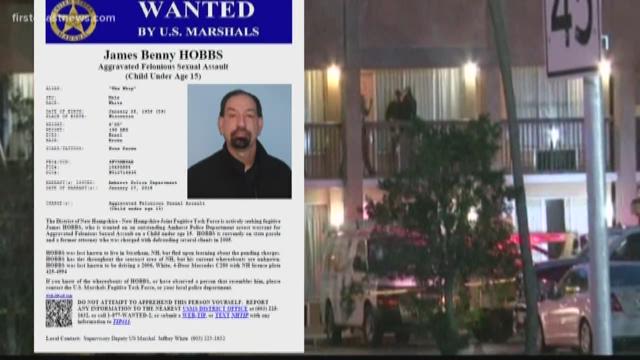 James Hobbs, 59, was a fugitive on the run when he was shot and killed at a St. Augustine hotel Tuesday. The U.S. Marshals Office and the FBI were tracking him since he fled from New Hampshire to Florida following a warrant for his arrest on charges of aggravated sexual assault on a child.

Previously, Hobbs practiced law as an attorney in New Hampshire until he was charged with defrauding several clients out of thousands of dollars back in 2005 and the Supreme Court requested he be disbarred.

Hobbs also worked as a volunteer Mock Trial coach for High School student for five years, where the Souhegan school principal at the time, Scott Prescott, praised his work and impact on the kids.

“The kids have enjoyed working with him and we've been happy with the work he's done; he's put in a lot of time and effort,” said Prescott in 2006.

The two U.S. Marshals who fired shots are back to normal duty Wednesday, but the St. Johns County deputy who also fired shots at Hobbs is now on administrative leave per protocol until the State Attorneys Office can investigate whether or not the shooting was justified. That deputy, Mohammad Toubaili, has no negative history with the department since he joined in 2014. In fact, he was praised for wading through chest-deep water to save a family from flooding after Hurricane Irma.

“At some point, he did not comply and made sudden movements that all three people perceived as a threat and each person fired their gun multiple times,” Mulligan said.

Mulligan said they cannot rule out “suicide by cop” as an attempt by Hobbs since he was not armed at the door, nor did he have any weapons in his room.