'No one wants to have a child die before them': Victim's family sends letters to judge in fatal hit-and-run case

Haigler reportedly fled the scene and two women were found dead at the scene next to a pair of mangled bicycles, according to the arrest report.

The man accused of killing two women on bicycles in a hit-and-run crash last month in St. Johns County pleaded not guilty on Monday.

Henry Haigler III is charged with two felony counts of leaving the scene of a crash involving death.

Family members of Bonnie Parry - one of the women struck and killed - have sent letters to the judge ahead of Haigler's court appearance, asking for Haigler to be prosecuted to the fullest extent of the law.

"Words cannot describe the turmoil our family is going through because of this horrific accident," writes her brother, Barry Dufoe. "It really troubles me knowing that Henry Haigler III has multiple drunk driving charges on his record. But the State of Florida issued him another driver's license."

"Henry Haigler III ran over my aunt with his car and left her there to die," writes her nephew, Brandon. "I hope you will understand the pain that we are feeling and sentence this man the maximum that Florida allows."

"Our mother is 79-years-old and we have seen, in this short time, how drastically her health has changed since this incident occurred," writes Brenda Damphousse, Parry's sister. "No one wants to have a child die before them."

*Read the full letters below

The St. Johns County Sheriff's Office says that Haigler struck Susanne Landino, 61 and Parry, 53, both of Jacksonville with his vehicle on July 15 around 10 a.m. in the area of 5400 Race Track Road, near Bartram Springs Parkway.

Haigler reportedly fled and the two women were found dead at the scene next to a pair of mangled bicycles, according to the report.

SJSO served a search warrant at Haigler's house, where the vehicle was found with biological material and hair embedded in the front windshield, the report said. 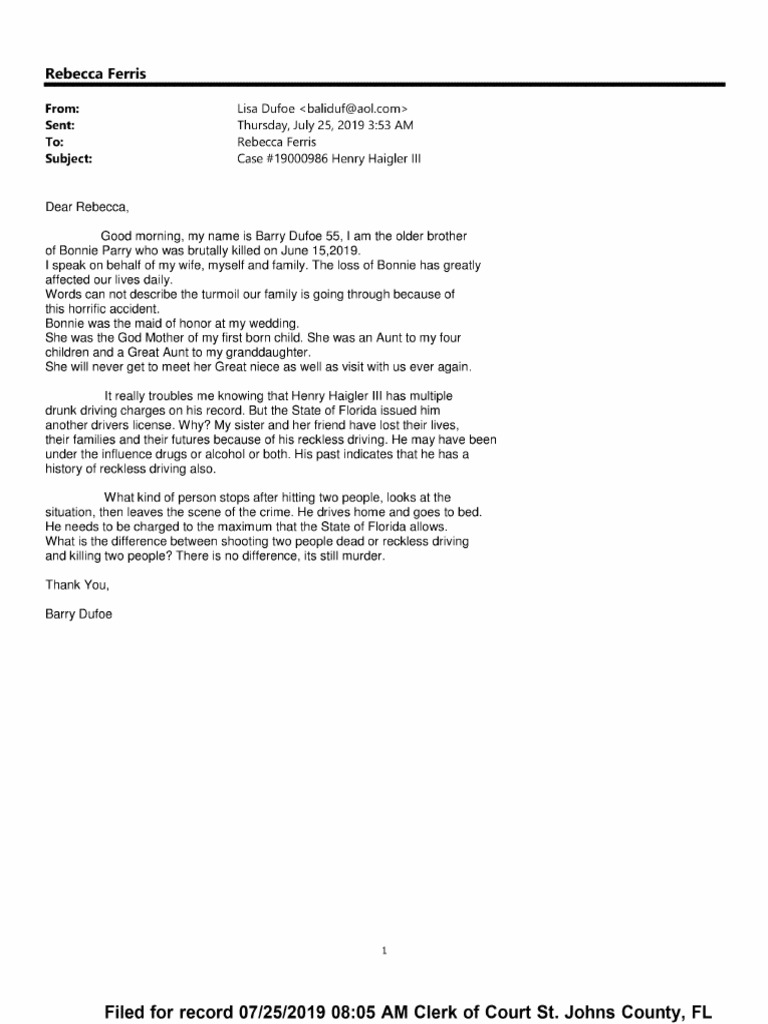 Letter From Brother
Lisa Dufoe Thursday, July 25, 2019 3:53 AM Rebecca Ferris Subject: Case #1900986 Henry Haigler I Dear Rebecca, Good morning, my name is Barry Dufoe 55, | am the older brother of Bonnie Parry who was brutally killed on June 15,2019. speak on behalf of my wife, myself and family. 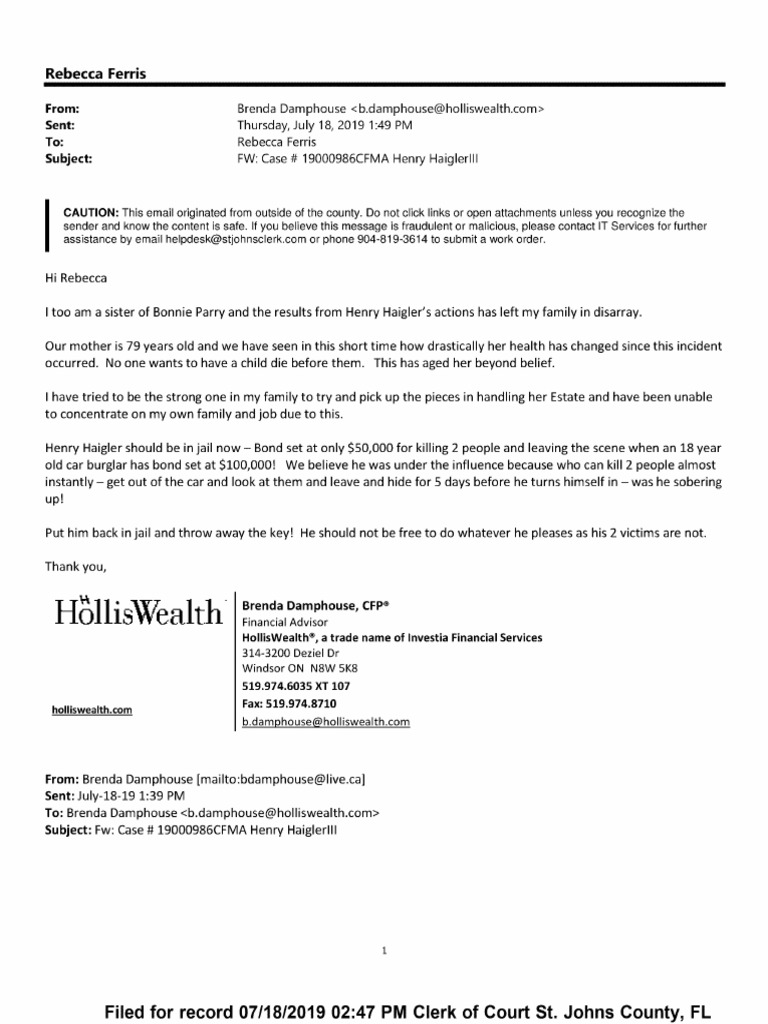 LETTER FROM SISTER.pdf
Hidden Figures: The American Dream and the Untold Story of the Black Women Mathematicians Who Helped Win the Space Race 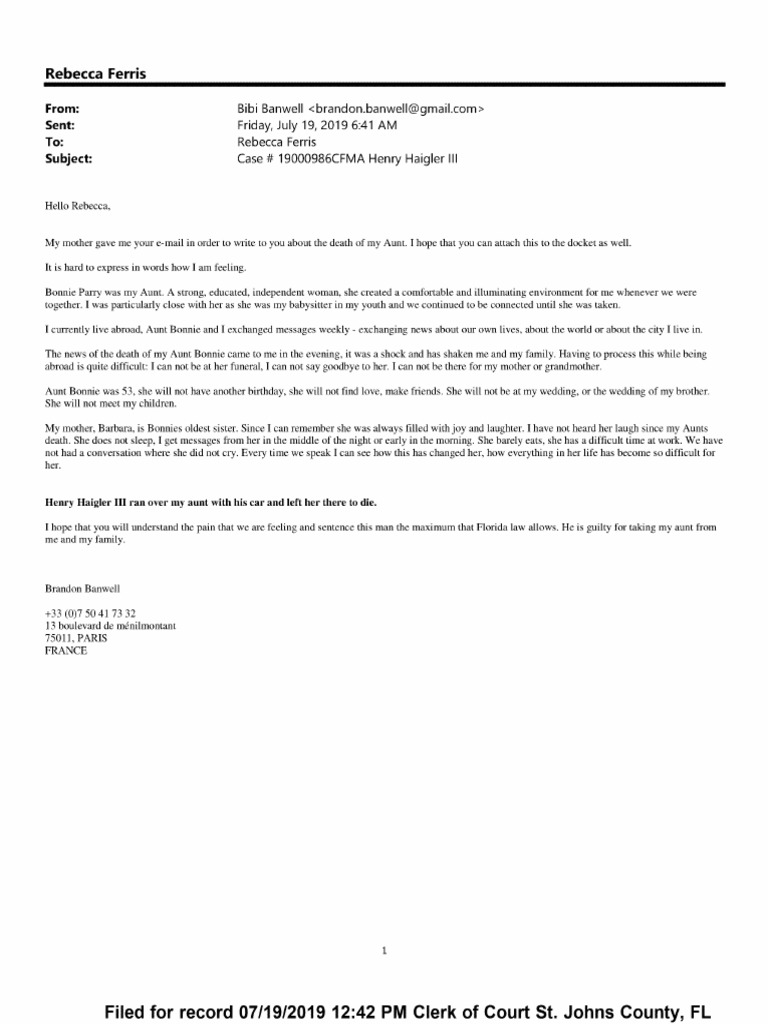 LETTER FROM NIECE.pdf
Hidden Figures: The American Dream and the Untold Story of the Black Women Mathematicians Who Helped Win the Space Race 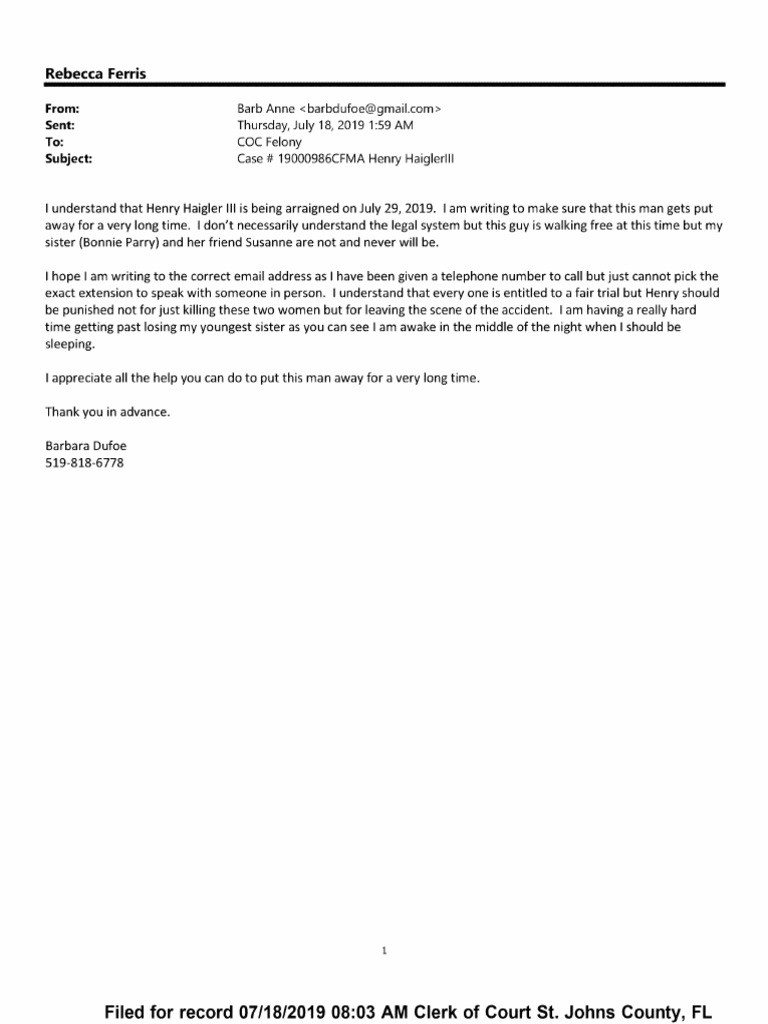 LETTER FROM ANOTHER SISTER.pdf
Barb Anne Thursday, July 18, 2019 1:59 AM COC Felony Subject: Case #t 19000986CFMA Henry Haiglertll understand that Henry Haigler III is being arraigned on July 29, 2019. | am writing to make sure that this man gets put away for a very long time.