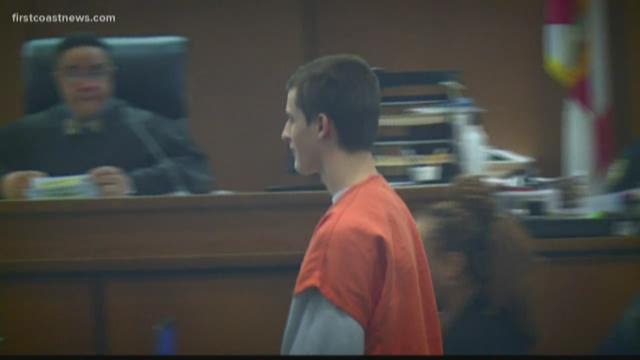 JACKSONVILLE, Fla. -- A Neptune Beach teen accused of murdering his grandmother has been extradited back to Jacksonville from New York Tuesday, according to the Jacksonville Sheriff's Office.

Logan Tyler Mott, 15, was booked on a second degree murder charge, as well as a theft of a motor vehicle charge in the Duval County Jail. He wasn't eligible for bond. The Public Defenders Office confirms Charlie Cofer is representing Logan Mott.

According to Mott's arrest warrant, the 15-year-old was spotted on camera in Pennsylvania at an ATM machine. Video showed the teen using the victim's debit card.

JSO issued a murder arrest warrant for Mott in regards to French's murder.

Mott made his first court appearance in Duval County Wednesday morning. He appeared in an orange jumpsuit and was represented by Public Defender Charlie Cofer.

Cofer, a former Duval County judge, told First Coast News he plans to represent Logan Mott himself with the help of Alan Chipperfield, the chief for his homicide division. Cofer said part of the reason he chose to run for public defender was to get involved in more cases, and he decided on this one.

When asked how Logan Mott was doing, Cofer said: “appropriate for his circumstance.”

According to JSO, Mott is being held in an isolation cell for his own safety and will remain there until he is sentenced. He has the same privileges as other inmates but is housed by himself.

Almost two weeks after an initial missing persons case shifted to a murder investigation, Logan Mott is back in Duval County. Mott has been charged as an adult with second-degree murder and grand theft auto.

We understand this is a case of great interest, but because it is pending we will not be providing further comment.”