Matthew Scott Sullivan, 36, was convicted by a San Diego jury last year of second-degree murder in the death of his 31-year-old wife, Elizabeth. 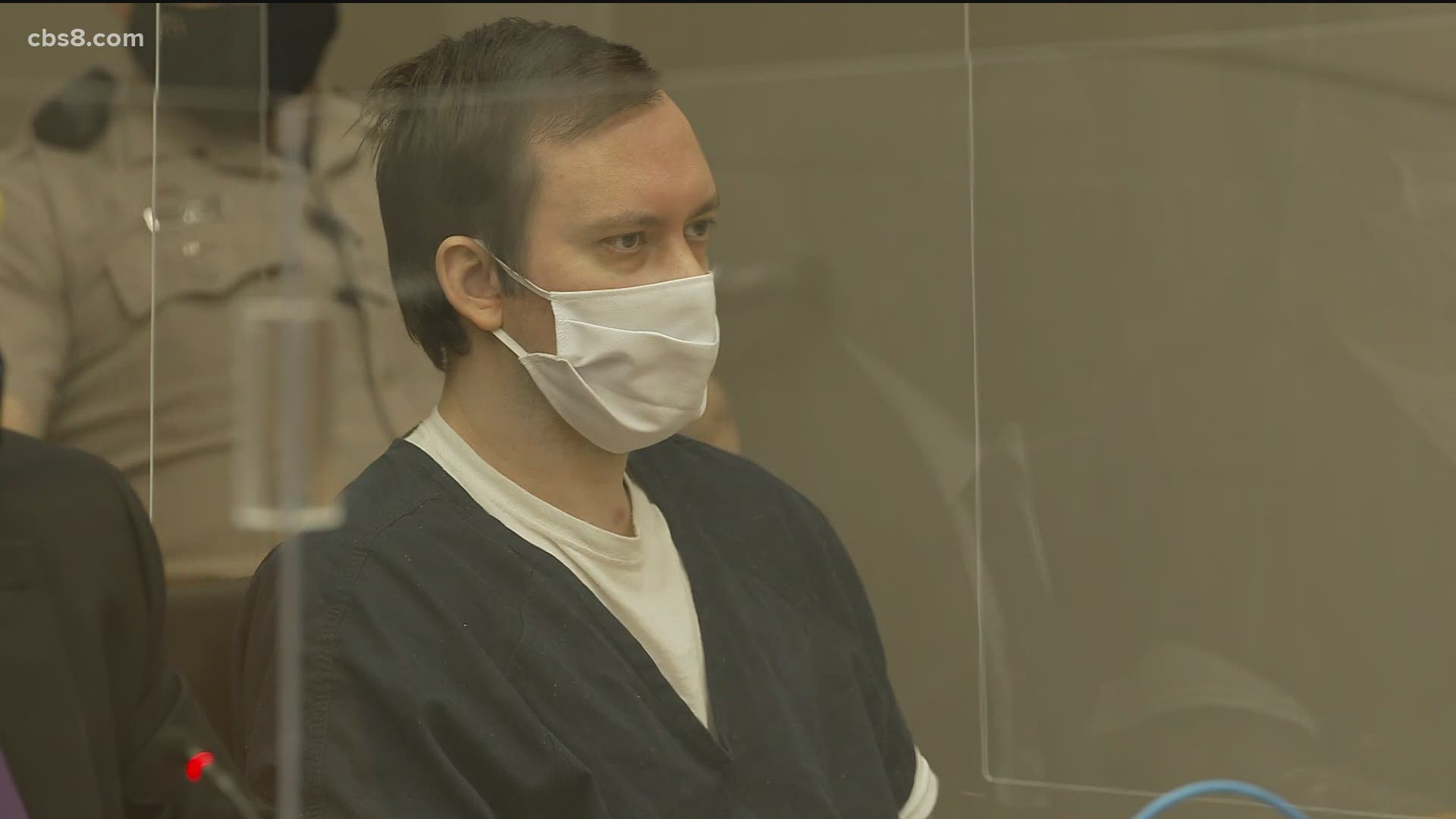 SAN DIEGO COUNTY, Calif. — A former Navy man convicted of fatally stabbing his estranged wife, whose body was found in San Diego Bay nearly two years after she vanished, was sentenced to 16 years to life in state prison on Friday.

Matthew Scott Sullivan, 36, was convicted by a San Diego jury last year of second-degree murder in the death of his 31-year-old wife, Elizabeth, who vanished on the evening of Oct. 13, 2014.

Prosecutors allege Sullivan killed his wife at the couple's Liberty Station home, then hid her body inside a freezer for nearly two years before dumping it in the water on the day he was set to move out of San Diego.

Deputy District Attorney Jill Lindberg alleged at trial that after stabbing his wife at least five times in her bedroom, Sullivan hid the body and murder weapon inside his home until he was compelled to discard Elizabeth's remains when movers arrived Oct. 4, 2016, at the onset of his cross-country move to the East Coast.

"The defendant murdered his wife in their home as their children were in another room," Lindberg told the court Friday. "He didn't give her a quick, painless death: it was essentially torture."

Her decomposed body was discovered that same day in the water about a half-mile from their residence, dressed in the same clothes she was last reported wearing.

An autopsy revealed a series of injuries to her ribs consistent with stab wounds, as well as fractures to her jaw and her nose.

Investigators also discovered the victim's blood beneath the carpet of her bedroom and on a knife found in the attic of the couple's home, according to Lindberg.

Leading up to the final sentencing, Elizabeth Sullivan's loved ones had an opportunity to speak directly to the judge.

"A longer sentence won't make the pain go away, nor will my recounting of the sorrow I've gone through these last six and a  half years make  this man feel any differently than he does now," said San Diegan Nathan Caracter, a close friend of the victim.

"Matt has caused a tremendous amount of pain to me, Elizabeth's family and friends," said Elizabeth's best friend, Calandra Duckett, at times holding back tears. "There are no words to describe the pain that still sits in the pit of my heart."

" I pray that Matt never see or experience freedom again," she added.

Defense attorney Marcus DeBose argued that the presence of her blood inside her bedroom and on the knife stemmed from self-inflicted cutting, due to a reported history of depression and self-harm. He said that about a month before her disappearance, Sullivan had discovered that his wife had cut herself with a broken shard of glass and bled heavily throughout her bedroom.

DeBose said a more plausible theory was that she stashed the knife in the attic to keep her cutting behaviors furtive, rather than her husband holding onto the murder weapon for two years, when he could have easily disposed of it at any time.

DeBose also said his client's wife engaged in erratic behavior, including the cutting, as well as substance abuse, and frequently disappeared from home without notice. The defense attorney said she'd previously talked to her father and friends about leaving Sullivan and their two children.

On the night of Oct. 13, 2014, DeBose alleged she simply left the home and never returned.

DeBose  tried in vain to argue for probation for his client on Friday, pointing out his lack of a criminal record before this.

"Mr. Sullivan is a boy scout from Minnesota," DeBose told the court. "There is Midwest nice and then there is 'Boy Scout from Minnesota' nice. This is a person who got through high school without disciplinary action of any kind, no juvenile court contacts."

Lindberg told jurors that the victim never contacted anyone after Oct. 13 and never touched about $1,000 she transferred from the couple's joint account to her personal bank account shortly before her disappearance.

The Sullivans' marriage was spiraling over financial issues and her affair with another man, leading the couple to start sleeping in separate bedrooms, she said.

When Sullivan arranged for his mother and sister to move into the Liberty Station home on Oct. 13 to begin caring for their children, his wife contacted an attorney to secure a restraining order to keep her husband's family out of the home, Lindberg said.

In addition to being angry over his wife's cheating and her attempts to obtain a restraining order, the prosecutor alleged Sullivan also feared she might take his children in the impending divorce.

The marriage was "speeding toward a conclusion that (Sullivan) did not like" and "his back was against the wall. He had to do something to stop her, so he did," Lindberg told the jury.

After Oct. 13, 2014, one of the victim's friends, who knew she was planning to leave Sullivan, couldn't reach her and reported her missing.

Sullivan did not report her disappearance, but Lindberg noted he did go to a store the morning of Oct. 14 to purchase a single item: carpet cleaner.

Investigators searched the home in 2014, when it was still a missing persons case, and found an empty freezer in the garage, Lindberg said, but nothing that could lead to an arrest.

A former San Diego County deputy medical examiner who helped conduct the autopsy testified that the victim's decomposition was more consistent with someone who had been dead for one to two months.

Lindberg said the most probable explanation is that Sullivan utilized the freezer to hide the body, which accounted for the delayed decomposition, while DeBose countered that theory was mere speculation.

The prosecutor said a police cadaver dog alerted officers to the presence of a dead body in Sullivan's garage during the 2016 investigation, which she said indicated the body had been hidden in the freezer there and was recently moved.

The defendant was arrested in 2018 at his home in Delaware and extradited to San Diego.