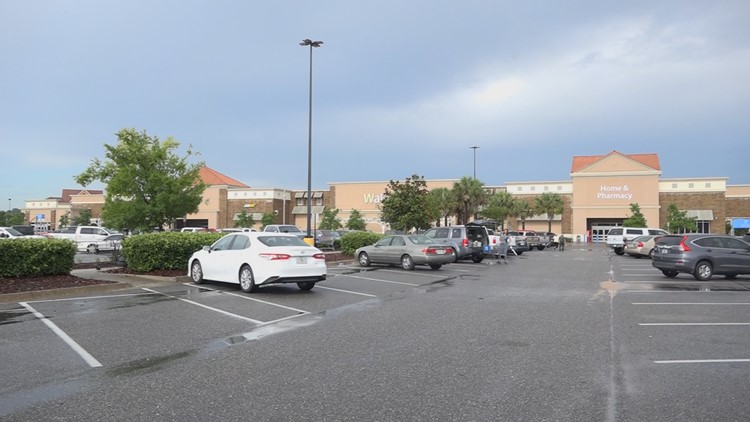 A man racked up several felony charges Friday after his failed attempt to allegedly steal an entire cash register from Walmart.

It all came to an end when the suspect, Christopher Hill, could not seem to find a getaway car.

According to a police report, Hill tried to steal money out of the cashier's drawer while checking out cigarettes but the clerk closed it before he could snatch any cash.

That's when Hill reportedly picked up the entire cash register and ran away, looking for a getaway car.

"He wasn't going to get my truck," said retired army veteran Scott Reardean. "I don't care if you're Dwayne 'The Rock' Johnson, you're not getting my truck."

Reardean said he, his wife Laurie, and their granddaughter were headed to the Cold Stone Creamery in River City Marketplace for ice cream. Hill had made the .2-mile trek from the Walmart to the ice cream shop's plaz, and confronted Reardean as he was getting out of his car.

"He had put the cash box back in the bed of my truck," Reardean said.

Reardean says his wife and granddaughter were already a few cars down in route to the store.

"[He] pulled his knife and pulled my shirt and kept trying to pull me out of the truck," Reardean said.

Reardean says the force ripped his shirt and Hill began to stab him.

"Cut me in two fingers and one on the calf," Reardean said.

Little did Hill know, Reardean had two secret weapons. The first was his gun, which he kept in a console.

"Once he saw that," Reardean said, "I mean, you don't bring a knife to a gun fight."

The second secret weapon was his wife, Laurie.

"She had my back," Reardean said with a laugh.

Reardean says he called his wife's name and she came running.

"I got in between them and I pushed him off," Reardean said.

Laurie says she tried to calm him down and offer him help, but Hill refused. She went to call 911 and says Hill grabbed the cash register and ran off. He reportedly ran towards a nearby Starbucks.

According to the police report, Hill let himself into a woman's car who had been in the drive thru, sat in the passenger seat and ordered her to drive.

There, Hill reportedly barricaded himself inside the bathroom. That's where police found him, ordered him to come out, and arrested him.