Two Naval Station Mayport sailors were driving along Hodges Boulevard when a man in the middle of the road suddenly climbed onto the hood of their car. 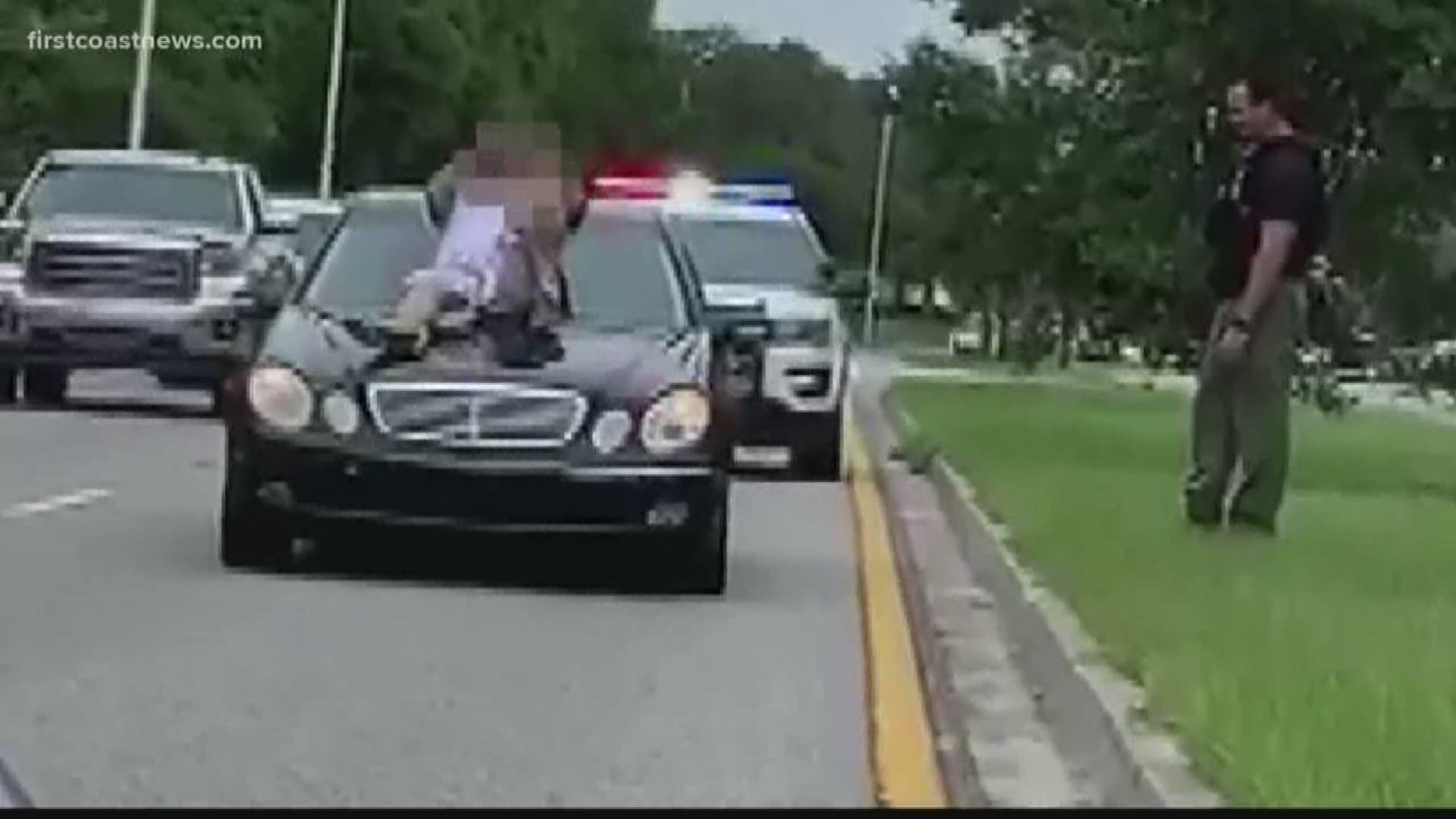 JACKSONVILLE, Fla. — Two Naval Station Mayport sailors had a close call as they were driving along Hodges Boulevard Tuesday at around 10:30 a.m. when a man in the middle of the road suddenly climbed onto the hood of their car. It happened just after they turned off of Atlantic Boulevard and onto Hodges Boulevard near the Woodhollow Apartment Homes.

Sailors Katherine Mossquera and Jenny Sue Wilkinson decided to have lunch off base that morning, so the two friends took a drive together. Wilkinson was in the passenger seat.

Away from the base, they never expected to encounter a crisis on their lunch break, but that's exactly what happened.

"We noticed cars started to slow down in the turning lane," Wilkinson said. "They started to swerve off, then all of a sudden, a man just pops out from behind the car right in front of us. When she slowed down to not hit him, he took the opportunity and just leaps onto the hood of the car."

In shock, the two women drove about 50 more feet then came to a stop on the busy road in the middle of traffic as he clung to the hood of their car.

"He was in a panic, he looked like he needed help or something," Wilkinson said.

As the man laid on their hood, the sailors turned on their flashers, locked the doors and called 911. Then they noticed something else. The man had two knives sticking out of his shorts, one smaller knife and one larger kitchen knife.

Wilkinson took pictures in case he tried to escape.

"We don’t know if he has a gun, but when we saw the knives we knew it was serious," she said.

She says cars started to pull over around them and they felt comforted as some people offered to help, but they warned them to stay away because they didn't want anyone to get hurt.

She says the Jacksonville Sheriff's Office arrived about 20 minutes after they called 911 and they were able to help the women safely out of the car.

JSO identified the man on the hood as 44-year-old Ja Ja Leoncio Rodriguez, who admitted to police he used drugs the night before.

He was Baker Acted out of caution. The police report states the reason was due to "mental illness."

Rodriguez has a lengthy criminal history, mostly related to theft, according to police. Just 15 days ago, Rodriguez was released from prison after serving more than four years behind bars for charges including grand theft.

The two women are just happy no one was hurt.

"It was crazy," said Wilkinson. "I mean, what do you do in that situation? No one knows what to do, but I feel like we did a good job handling it."

Due to the suspect’s mental state, and concern that he may harm himself, he was taken to a local hospital by ambulance from the scene.