The State Attorney's Office released hundreds of pages of law enforcement notes relating to the murder case against Kimberly Kessler.

In those pages of documents, law enforcement said that Joleen Cummings blood was found on a pair of boots that Kessler had inside of a storage unit that she was renting.

Kessler is accused of murdering Cummings, a Nassau County mother of three, who disappeared Mother's Day weekend of 2018. Her body has not been found.

Kessler has maintained her innocence by entering a 'not guilty' plea. Her next court appearance is scheduled for later in April.

A key section of the report is a summary of events by police which gives a timeline of events starting on the day that Cummings was supposed to pick up her children from her ex-husband.

"On Sunday May 13 Cummings failed to pick-up her children from her ex-husband.

On Monday May 14 Cummings failed to appear for work. On May 14 a Nassau County Sheriff's Office Detective was at Tangles as Sybert pulled in. When Sybert learned law enforcement was present, she left without coming in to the building. Sybert told the owner of Tangles that she was leaving town.

Cummings' Ford motor vehicle was discovered in the Home Depot parking lot in Nassau County. Upon reviewing surveillance video, Cummings' vehicle pulled into the Home Depot parking lot at 0117 on Sunday May 13. At 0119 a figure dressed in black walks away from the vehicle. At 0120 Sybert, dressed in black and wearing boots, is on video walking into the Gate Station located in the same shopping center. Sybert left the Gate and took a taxi to Tangles according the taxi driver.

Sybert had obvious injuries to her face and hands, but denied any knowledge or involvement in the disappearance of Cummings; Sybert stated her injuries were from riding a bike. Sybert had bandaids covering some of the wounds. It should be noted, when Tangles Hair Salon was processed by Crime Scene Technicians, blood was located inside and larger areas gave indications that attempts at cleaning up blood had been made.

On May 18, 2018, Detective D.L. Brewer located a storage unit rented to Jennifer Sybert located at 2137 Sadler Road, Fernandina Beach, Florida. Employee's verified that Sybert is the renter of the unit 17. The unit is in her name only and has been rented since January 13, 2018. On May 12, 2018, Sybert's personal gate code was used to enter the facility at 8:29 p.m. and again on May 13, 2018, at 3:58 a.m. as well as several times since. According to Sybert's cellular phone history, she was in the area of the storage unit on May 13,14, and 15, 2018. NCSO with the assistance of FDLE searched the storage unit and found boots that appear to have blood on them. The boots look similar to the boots Sybert is wearing in the video from the Gate Station on May 13, 2018. FDLE analyzed the boots and found Cummings' DNA on the bloodstain on the boots. A sock was also seized from the storage unit FDLE analyzed the sock and found Cummings' DNA on the blood stain and Sybert's wearer DNA on the sock."

To look at the full report, which spans over 500 pages, please see below. 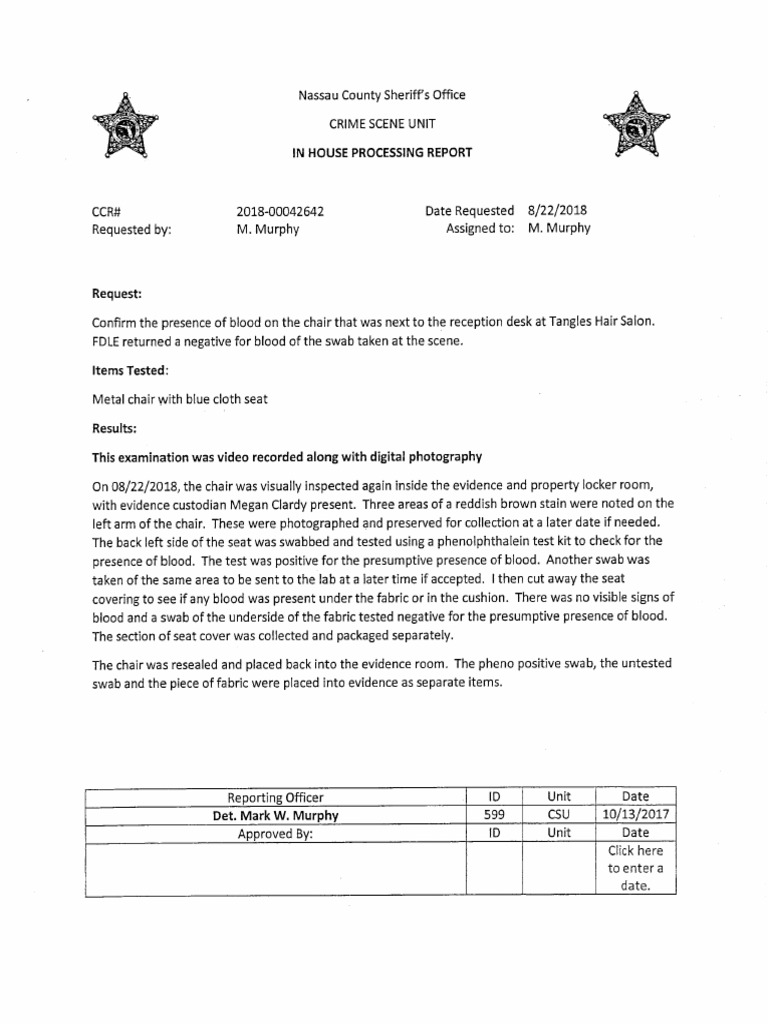