11Alive has learned that Juanita Abernathy, wife of the late Ralph David Abernathy, passed away around 2 p.m. Thursday at the age of 88. 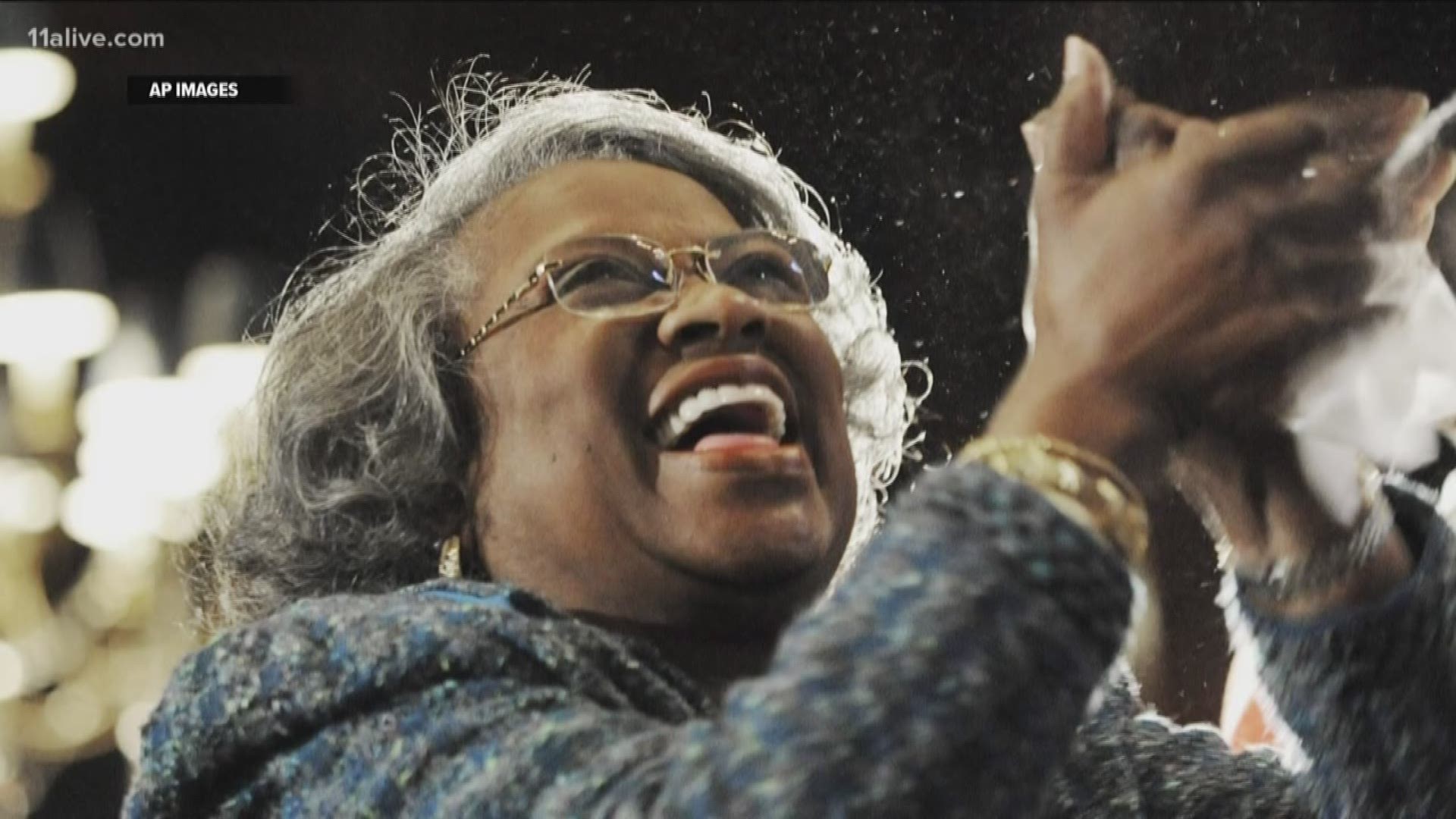 ATLANTA — A spokesperson for the Southern Christian Leadership Conference has confirmed that a civil rights leader has died.

11Alive has learned that Juanita Abernathy, wife of the late Ralph David Abernathy, passed away around 2 p.m. Thursday at the age of 88.

On a biography provided by the Martin Luther King Jr. National Historic Site, she was described as a "foot soldier" of the Civil Rights Movement who participated in "all of the pivotal protests of the era." Among her actions, Abernathy helped rally the black community in Montgomery Alabama, as her husband and Martin Luther King Jr. led the Montgomery Bus Boycott between 1955 and 1956.

She continued her activism upon moving to Atlanta in 1961 where she worked to spur school desegregation in the city by enrolling her child in independent white schools. She also accompanied her husband to the 1963 March on Washington and walked on the "frontlines of the Selma to Montgomery March" in 1965.

She and her daughter, at the time an infant, even survived a bombing of their home by white supremacists.  According to the Associated Press, Abernathy also taught voter education classes, housed Freedom Riders and marched on Washington, D.C., in 1963 seeking passage of what became the Civil Rights Act. Abernathy also was a national sales director for Mary Kay Cosmetics.

She spent her later years traveling and speaking of her experiences and urging the nation to continue the fight for justice and equality.

Abernathy also served on the Board of Trustees for the Morehouse School of Religion and was on the board of directors for MARTA and the Atlanta-Fulton County League of Women Voters.

A family spokesperson said she died at Piedmont Hospital in Atlanta following complications from a stroke.

Several local, state and national figures have offered kind words about Abernathy's life and legacy since news of her death were first announced.

Mayor Keisha Lance Bottoms said in a statement that:

The City of Atlanta mourns the passing of Juanita Abernathy, a founding champion and architect of the Civil Rights Movement. Along with her husband, Ralph David Abernathy, Sr, and their close friends Martin Luther King Jr. and Coretta Scott King, Juanita Abernathy participated in the kitchen-table strategy sessions that led to the Montgomery Bus Boycott and inspired the march toward freedom and equal rights for African-Americans.

For her fearless activism, she endured the wrath of white-supremacist threats and bombings. As a mother, teacher and Atlanta community icon, Mrs. Abernathy will be remembered as a role model whose life example forever serves as a beacon of love, commitment and justice.

I was saddened to hear about the passing of Mrs. Juanita Abernathy today, the wife of the late Reverend David Abernathy, the right hand to Dr. Martin Luther King Jr.

Juanita could have lived a comfortable life.  Her father was a prosperous dairyman and cotton farmer in Uniontown, Alabama who could afford to send her to a boarding school in Selma in the 1940s.  But she decided to dedicate her life to building a society more at peace with itself, to the advocacy for simple justice, and a commitment to the public good.  She worked tirelessly toward goals that were bigger than herself, and because she did she will go down in history as an icon for equal justice in America.

Juanita marched on the front lines of the Selma-to-Montgomery march, was a cornerstone of the Montgomery Busy Boycott, and a fearless advocate, in her own right, for non-violent direct action.  Her life is a testament to the towering role that women played in the Civil Rights Movement.  The men received most of the credit, but behind the scenes women were often the doers, the organizers, and advocates, who formed the backbone of the struggle.  Juanita Abernathy was no exception and was often a shining example.

She endured the terrorism of harassing telephone calls to her home, threats on her life and her husband’s life, the doubts of naysayers who feared the movement would fail, the sleepless nights of worry and the suffered the slings and arrows of hate that were a part of non-violent change in this country.  She somehow survived the bombing of her home in Montgomery while she was home alone with her infant child.  But because Juanita Abernathy was bold, courageous, outspoken and deeply committed to the cause of social justice, we all live in a better country today than we did almost 65 years ago.  Juanita Abernathy was a dear friend and my sister on the frontlines, in the struggle for change.  My heart goes out to her children, Juandalynn, Kwame and Donzaleigh.  Their mother was one of a kind, and she will be deeply missed.

And members of the Atlanta City Council also weighed in on her impact on their lives:

“I know that the City joins me in extending our most heartfelt condolences to the family of Mrs. Juanita Abernathy. We are deeply saddened by the news of her passing. In hand with her husband the late Reverend Ralph David Abernathy, she played a pivotal role in the Civil Rights Movement and leaves a special legacy. Her pursuit for equality will never be ignored and we will forever honor her by remembering her commitment and service to humanity.”

“I am deeply saddened to learn of the passing of civil rights icon, women’s advocate, and servant leader, Mrs. Juanita Jones Abernathy. Her contributions to this nation, city and her overwhelming spirit with her husband, Reverend Ralph David Abernathy, during the Civil Rights Movement were legendary.

Without the sacrifices of Mrs. Abernathy and those countless others who shouldered the burden of civil rights for all, my service as a Council member today would not have been possible. As the nation mourns her death, I add my voice to the chorus of Americans who collectively say, thank you, Juanita Abernathy.

I offer my deepest condolences and prayers to my dear friends in the Abernathy family and to the many lives she impacted in the city and all over the world. Her beautiful elegance and gracious presence will be sorely missed. She left an indelible impression on my life. Good night sweet princess, may flights of angels sing thee to thy rest.”

“Juanita Abernathy was a woman of profound strength and courage. As the wife of Ralph David Abernathy, she was a fearless advocate for the Civil Rights Movement and all that it represented.

Unmoved by the relentless death threats, even surviving the bombing of their home, Juanita Jones kept fighting. She believed in a better tomorrow and spent her life fighting on behalf of her fervent beliefs. She will be deeply missed.”

“Mrs. Abernathy’s influence on this city and the entire world will not only be remembered for her role alongside her husband, the late Reverend Ralph David Abernathy, but for the lives she touched.

Through her fight against inequality and advocacy for justice, she leaves an incredible legacy. She will be missed, and her presence will forever be felt. I would like to send my deepest condolences to the entire Abernathy family and everyone that loved her.”

“It is with deep sadness that I learned this afternoon of the passing of Mrs. Juanita Jones Abernathy. Mrs. Abernathy was not only a long-time resident of District 9’s Historic Collier Heights neighborhood, but an internationally-known and well-respected leader in the Civil Rights Movement.

Along with her husband the late Reverend Ralph David Abernathy, Mrs. Abernathy relentlessly fought for justice and equality. We are all deeply grateful for the many years of Mrs. Abernathy's tireless work to better our nation and our City, where she served on the MARTA Board of Directors for 16-plus years, pushing for transit equity. My thoughts and prayers are with the Abernathy family, and may Mrs. Abernathy be remembered for her life full of service and advocacy.”

“I am absolutely heartbroken over the loss of our beloved Juanita Abernathy. As a child of the Civil Rights Movement, I grew up in the Abernathy home. She and my mother were best friends for 50 years. I was privileged to have a front row seat to my Aunt Juanita’s bold approach to change. She was a strategic thinker who led with elegance and grace.

She was a fierce warrior for peace and justice. She was proud and unafraid to stand on the front lines so that generations could experience freedom and have a chance at equality. My sincerest condolences to her children and the Abernathy family.”

“While many are chosen to lead a selfless life in service to others, Juanita Abernathy embraced her purpose to the Civil Rights Movement, the city of Atlanta and this country. We are infinitely better because of her contributions. Her life-long commitment to equality and justice is a legacy that should be the cornerstone for all who desire to serve. I extend my heartfelt thoughts and prayers to the Abernathy family.”

“I am deeply saddened to hear of the passing of Mrs. Juanita Abernathy. We will always remember the personal sacrifices and contributions she made alongside her husband Ralph David Abernathy. She was an advocate for the advancement of civil rights which helped cement her legacy as a pioneer for justice for all. I extend my profound condolences to the family and friends of this wonderful woman and national treasure.”

Atlanta Public Schools is preserving a piece of Atlanta History

Historian explains how modern Atlanta traffic traces back to segregation