Duval County Public Schools said the false threat was made to JSO and claimed Jefferson Davis Middle School was in danger. The school was then briefly placed on lockdown while police investigated. 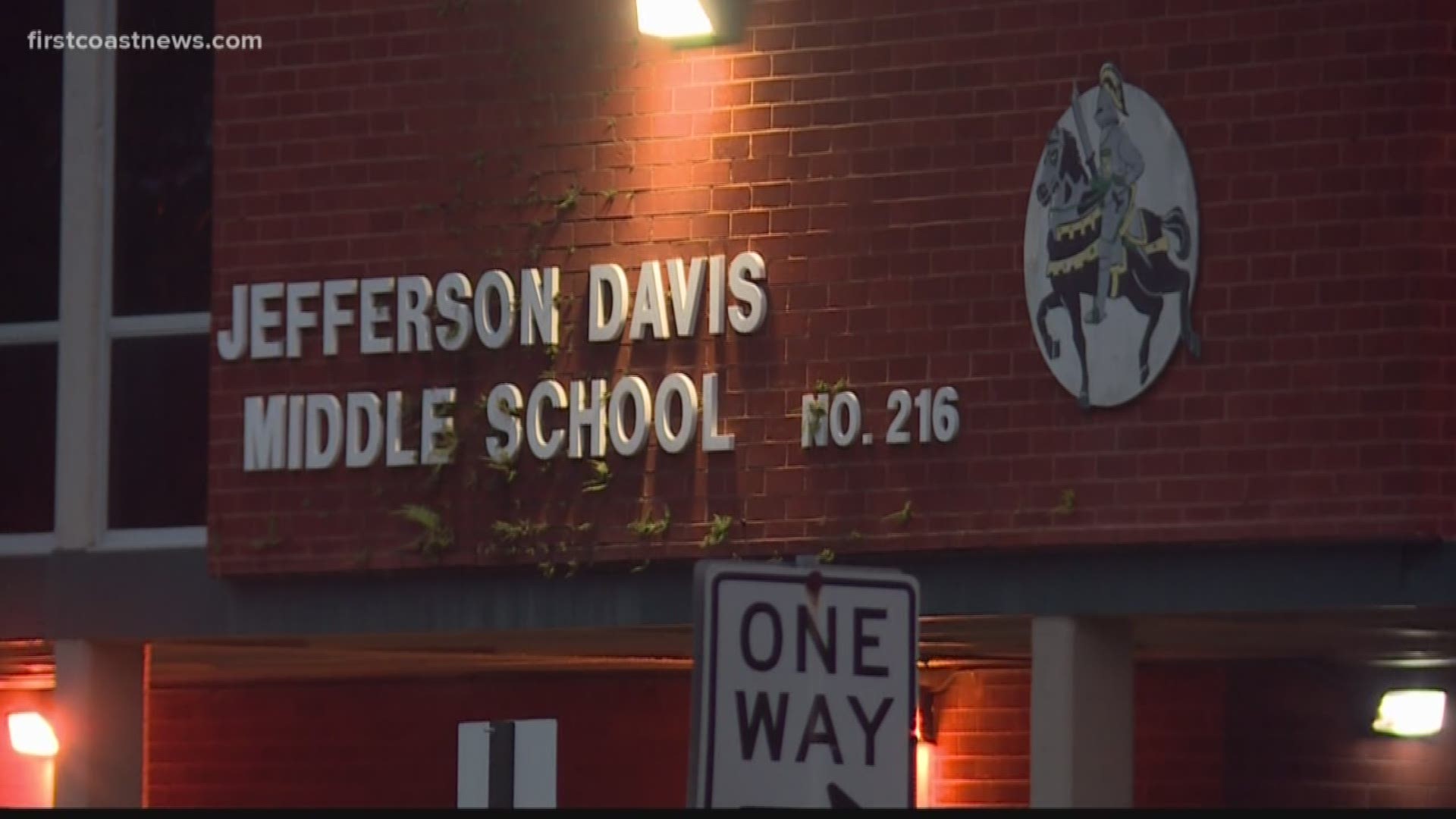 JACKSONVILLE, Fla. — A middle school on the Westside experienced a serious scare Thursday after a false threat was made to the school on Thursday and a JSO officer accidentally fired his weapon while investigating, school officials said.

JSO said they received a 911 call claiming a school shooting happened at Jefferson Davis Middle School at 7050 Melvin Road. The claims were found to be false, according to police and Duval County Public Schools.

It took JSO four minutes to respond to the school after the initial call was made to 911.

At 4:02 p.m., after the school was given the all-clear, JSO patrol officer Patrick Thach unintentionally discharged his deputy weapon outside the building, striking the ground and causing minor damage, police said. JSO said no other property was damaged and no students or school staff members were present at the time.

Thach has been with JSO for 12 years and has had four citizen complaints in his history with the department but none have them have been sustained, according to records.

Despite the incident, the school district told parents, "at no time was there a threat to our campus, and staff and students remained safe throughout the day."

Brothers Larry Ellis and Kayon Parkinson are in the 7th grade and said they witnessed the chaos unfold on Thursday.

They say it started when a girl in their class started to have seizures and pass out. The officer on campus was brought up to help and an ambulance was called in.

They said it was during that hectic situation when they overheard a classmate call 911 and falsely report a school shooting. Parkinson reported it to his teacher.

Former JSO detective Kim Varner said it's rare for an officer to accidentally fire a weapon, but it does happen.

"Every time you fire that weapon there is a report written," said Varner. "You just don’t hear about it unless someone gets hit, or like this, when it’s a situation at a school."

He said officers with JSO get trained quarterly on firearms to remain qualified.

JSO said they are investigating the incident in which the weapon was discharged.

The full statement released to parents from DCPS reads:

Good Afternoon parents and guardians of Jefferson Davis Middle School. This is Tracy Pierce from Duval County Public Schools calling to inform you of an incident on campus today that required us to put the campus on a brief lockdown. First, at no time was there a threat to our campus, and staff and students remained safe throughout the day.

Unfortunately, a false threat was made to the Jacksonville Sheriff’s Office indicating there was a threat on campus. This was false information.

However, all threats are taken seriously and JSO responded quickly. They were able to investigate the threat and determine the school was safe.

In the process of checking the school campus, a JSO officer’s firearm was accidentally discharged outside of the school. This part of the incident is being handled by the Jacksonville Sheriff’s Office. We will also be investigating the source of the original threat.

Thanks to the calmness and professionalism of students and staff, the situation remained calm and we were able to dismiss as normal. Again, staff and students remained safe throughout this incident.

While it is very upsetting that someone would make a false threat against the school and disrupt our campus -- and even more upsetting that a weapon was discharged -- we are appreciative for the calm and composure of our students and staff during a stressful situation.

Please talk with your children about what happened today and discuss the serious nature of making false threats. As always, thank you for your partnership in keeping students and staff safe.