The investigation included Homeland Security, DEA, US Postal Service and JSO. Five kilos of cocaine and more than $100k was seized from a home in Mayport. 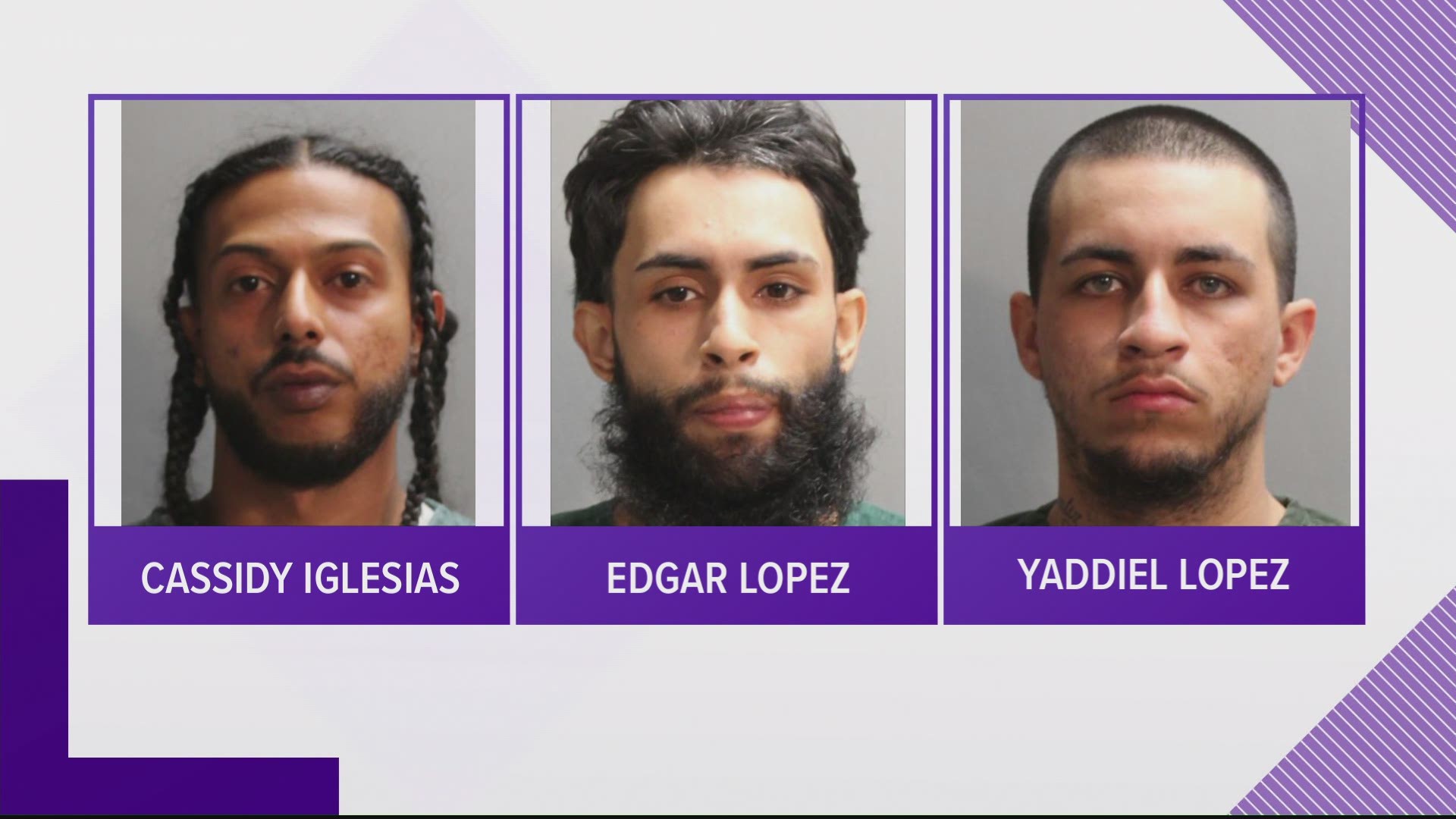 JACKSONVILLE, Fla. — Jacksonville police said they arrested three members of a drug trafficking organization following a drug raid at a home in Mayport where five kilos of cocaine and more than $100,000 were confiscated.

The Jacksonville Sheriff's Office announced the arrests at a news conference Thursday.

Investigators allege that the men participated in the actual sale, possession, transportation, delivery, and/ or storage of cocaine including U.S. currency used in the purchase of the drugs, according to the arrest report.

JSO said the organization was using four main locations in Jacksonville, including private residences and a business address to carry out various elements of their operation: A) 3961 Lochlaurel Drive, B) 3427 Net Court, C) 2760 Mayport Road #616, D) 6406 Merrill Road Unit A.

Two of the locations were later identified as Yandell Ortiz Lopez and Martinez-Iglesias' addresses.

In January, a suspicious package was seized at a FedEx distribution center by law enforcement in Bayamón Puerto Rico, the arrest report says.

JSO's Narcotics Unit was alerted by FedEx security in an effort to begin a local investigation in the Jacksonville area.

Additionally, postal inspectors from the USPS contacted the Narcotics Unit advising them that they found a suspicious box with a destination to Bayamón Puerto Rico.

Following this, investigators found that another suspicious parcel was inbound to Jacksonville from Puerto Rico a few weeks later and was to be delivered to the address on Mayport Road.

Narcotics detectives, USPS postal inspectors, and a Florida Highway Patrol canine handler met at the Post Office in Jacksonville to further investigate the contents of the box, the arrest report says.

While investigating at 3961 Lochlaurel Drive, undercover detectives observed Martinez-Iglesias' BMW parked in front of the residence.

They also saw a man wearing a gray sweat suit exit the passenger side of the vehicle and approach the front door of the residence, according to investigators.

A few moments later, the man returned to the vehicle and the car left the area.

Investigators said that Yandell Ortiz Lopez was the man who they had seen. Further investigation alledges that Jesus Ortiz Lopez is employed by the apartment complex at 2760 Mayport Road as a maintenance worker, the arrest report says.

Evidence that officers gathered showed that numerous addresses around the Jacksonville area have been used as locations to ship drugs from Puerto Rico. Investigators said the drug transactions were taking place at the business located at 6406 Merrill Road.

Last month, USPS inspectors informed the Narcotics Unit that another suspicious package was inbound to Jacksonville from Puerto Rico. Once the package landed, inspectors obtained a search warrant for the box and the parcel was delivered to its destination of Mayport Road on Feb. 26.

Investigators said search warrants were also obtained for all three of the men's residences, along with the business property at Merrill Road prior to the USPS package being delivered.

Based on the evidence found throughout the investigation, Yandell Ortiz Lopez, Martinez-Iglesias and Jesus Ortiz Lopez were charged with trafficking over 28 grams of cocaine.

Credit: Jacksonville Sheriff's Office
Cassidy Martinez-Iglesias was arrested following a drug raid at a home in Mayport where five kilos of cocaine and more than $100,000 was confiscated.

Credit: Jacksonville Sheriff's Office
Edgar Yandell Ortiz Lopez was arrested following a drug raid at a home in Mayport where five kilos of cocaine and more than $100,000 were confiscated.

Credit: Jacksonville Sheriff's Office
Yaddiel Jesus Ortiz Lopez was arrested following a drug raid at a home in Mayport where five kilos of cocaine and more than $100,000 were confiscated.

You can watch the news conference in the video player below: