'Heartbreaking': Attack on Jax homeless man apparently one of many crimes against the homeless

The homeless man identified as Michael Hargis was attacked near the corner of Adams and Hogan Streets. 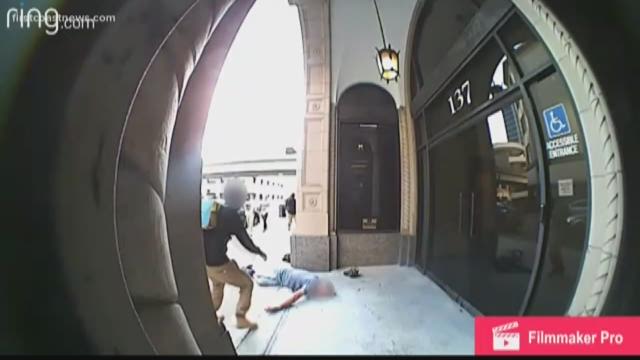 JACKSONVILLE, Fla. --The security camera video is silent, but the cry for help from the homeless man on the ground is loud.

"They knocked him down right here," said Ernest Flores, another homeless man who witnessed the event unfold. "I think he's still in the hospital isn't he? ... It is not safe. I don't care who sees me out here it is not safe."

On Tuesday, local attorney Belkis Plata heard a commotion from her street-level office

"I just felt something bad was going to happen," Plata said.

She activated her RING security camera and then called 911.

"The blood that was coming from his head was significant," Plata said.

The homeless man identified as Michael Hargis was attacked near the corner of Adams and Hogan Streets.

It is a very busy area in Downtown Jacksonville, but no one stopped to help. What is even more disturbing is that a man pushing a stroller stopped only to kick Hargis in his side while he was stretched out on the concrete pavement, Plata said.

"He kicks him and keeps continuing with his stroller down the street,' she said.

The size of Jacksonville's homeless population varies. Dawn Gilman CEO of Changing Homelessness said it is about 3,000. She said, unfortunately, crimes against the homeless are not unusual

"I think it is important for the public to know that it is more likely for the homeless to become the victim of a crime than commit a crime," Gillman said.

She is outraged by what she saw on the video.

"That was a brutal, violent act," she said.

Every frame of it to her is very disturbing. But she said what is especially disgusting is the scene where the guy kicks Hargis while he is out.

"That was probably the most heartbreaking part of that," she said.

Gilman said there are several myths about homelessness, including they don't want to or even to have a home.

"Nobody wants to be homeless," she said.

She said about 70 percent of the homeless population are locals. She would like to see more community involvement to help tackle the problem.

Flores said as long as he is living on the streets, he just wants to feel safe.

Gilman said there have been efforts in the legislature to make crimes against the homeless a hate crime, but all attempts failed.

A check of Hargis' condition at UF Health revealed he is no longer listed as a patient in the hospital.