An unmarked police vehicle, headlights on, parked in front Justin Reed's driveway. He brought a gun outside to check on it and was killed by two JSO officers. 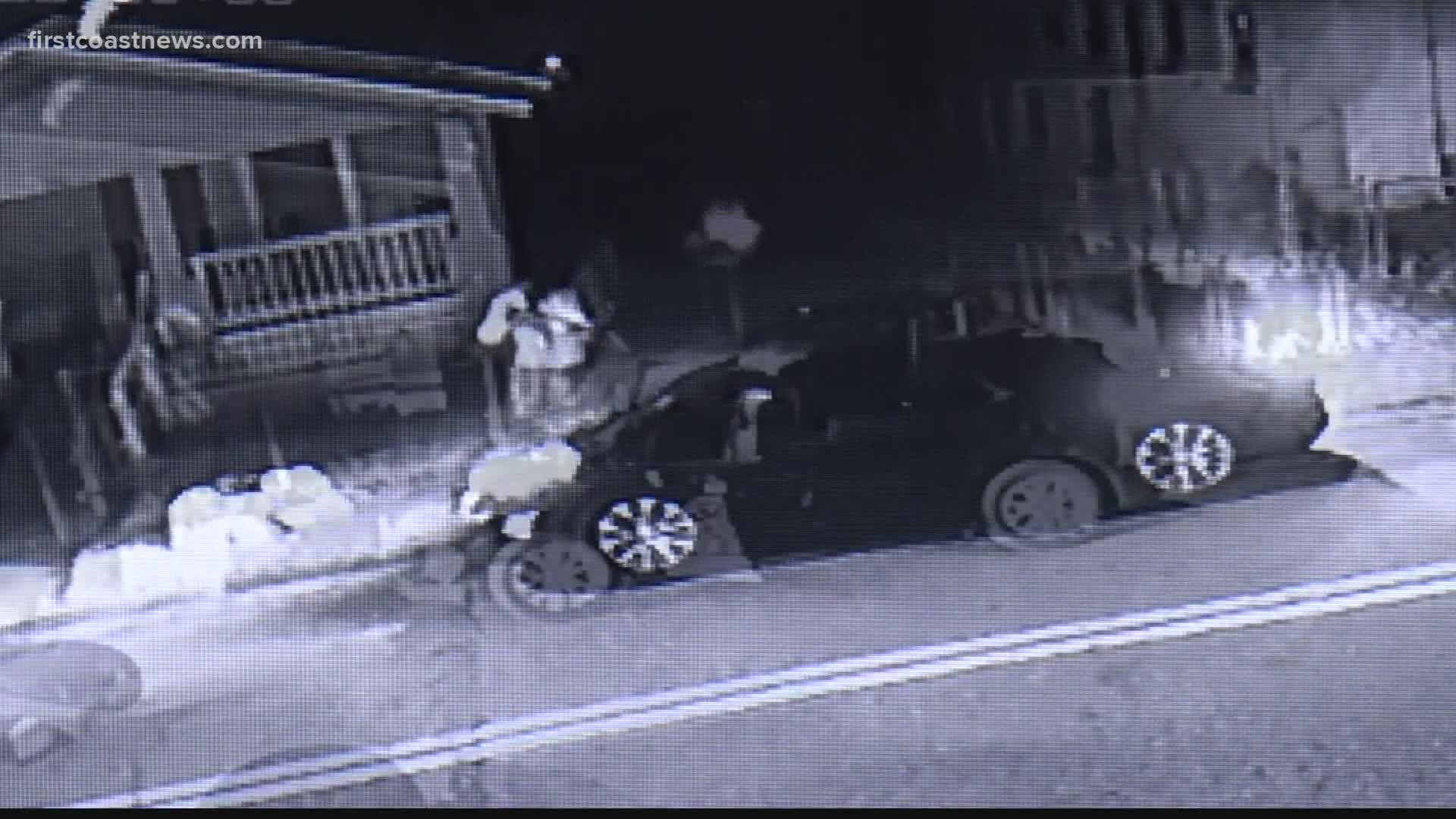 The State Attorney's Office said Monday that two Jacksonville officers were justified in killing Justin Reed, 34, on Nov. 4, 2020. He was shot to death by officers G.A Taylor and M.L Mullis in Jacksonville's Panama Park neighborhood.

"Detective Fields pulled onto 63rd Street and legally parked on the street, in front of 508 East 63rd Street to wait for other detectives who were coming to investigate gang activity nearby," according to a State Attorney's Office report released Monday.

Surveillance video shows the vehicle, headlights on, was parked and blocking Reed's driveway. It was 10 p.m. Reed was not the subject of the investigation, police have said.

"Less than two minutes later, Reed came from behind the house at 508 East 61st Street and approached the officers' SUV armed with a 7.62x39 SKS, high-powered rifle with an extended magazine. Reed came up to the SUV and yelled, 'Who the fuck are you looking for?' while banging the barrel of the rifle on the hood of the SUV," the report states.

“Mr. Reed thought there was a suspicious vehicle according to his loved ones, so he went out there to confront that vehicle and he took a rifle with him at the time,” First Coast News crime and safety expert Mark Baughman said.

According to the State Attorney’s Office report, Reed came up to the car and asked: “Who the f*** are y’all looking for?” and pointed his weapon at officers. Two of the officers who fired their weapons gave statements to investigators.

“Officer [G.A.] Taylor rolled the front window down and I stated that we were the police. The male continued to point the rifle in our direction,” Officer M.L. Mullis stated.

The report says Officers Taylor and Mullis fired at Reed and struck him several times. An autopsy report shows Reed was struck 12 times.

Baughman says he knew one of the officers involved and says they felt remorseful for having to use deadly force.

Two of the three officers in the vehicle did not have their body cams activated. The report says Officers Taylor and Mullis were wearing body cameras, but the cameras were not activated because the officers were not engaged in police activity while sitting in their SUV.

Detective Fields, sitting in the driver’s seat, activated his body camera immediately after the shooting.

“Since his body-worn camera was powered on, the shooting was recorded during the 30 second ‘pre-event buffer’ feature before activation, but there is no audio to the recording,” the report states.

“In this particular instance, I think they didn’t have enough time to put those body cams on, they were out there in a covert fashion,” Baughman said.

Reed's fiancée, Shakeisha Watson, told First Coast News in the days after the shooting, that the officers did not identify themselves. The State Attorney's Office report states that Watson gave investigators conflicting testimony.

"Each time, she told a different version of events. Her stories were both inconsistent with one another and refuted by the evidence and video footage of the shooting," the report states.

Police initially said they didn't believe Reed fired his weapon at the officers, but "in the weeks following the incident, Detective Fields noticed bullet damage to the roof of his SUV ... enhanced ... security video ... shows that Reed fired his rifle at the police vehicle during the incident but was not the first to fire," the report states.

Surveillance video from Temple Gospel Church, located across the street, shows Reed peering out from behind a home at the unmarked vehicle blocking his driveway before approaching it.

The report concludes: " ... our review of applicable Florida law, Officer Taylor and Officer Mullis' use of deadly force was justified. We will take no further action in this matter."

We spoke with Kim Varner, a former JSO officer, who says the officer's acted appropriately as Reed aimed the rifle at the officers.

"When someone has a weapon pointed at you, you don't know what their intentions are.  It takes a second to pull the trigger.  The officers did what they had to do by defending themselves."

Community groups spoke out against the state’s decision.

“This was very unfortunate, because Mr. Reed was only trying to protect his family and his home,” Ben Frazier of the Northside Coalition said. “If the incident had taken place in Mandarin the police would have knocked on the door of a white homeowner and properly identified themselves."

***WARNING: The video ends several seconds before Reed is shot. However, it still may be disturbing to some.

The report says Reed had four felony convictions and as a convicted felon, he was prohibited from having a gun.

Jacksonville activist Ben Frazier said Reed should not have went outside with a gun to confront the unknown vehicle. "He should've called 911," Frazier told First Coast News on Monday. He also said trust issues between JSO and the Black community is a barrier for many to call 911 for help.

Frazier, leader of the Northside Coalition, also wonders if the situation might have been different had it occurred in another community, such as Mandarin. There, he said officers may be more proactive in approaching a resident to say what they're doing.

"This could've ended much differently if they (police) just let him know, 'we have an investigation going on ... you're not under investigation. They could've handled this differently, but he (Reed) should've called 911."

Frazier said he understands Reed's uneasiness seeing an unidentified car parked in front of his driveway at 10 p.m. in a neighborhood known for gang activity. "In the hood, you have to worry about home invasions, robberies," he said.

Credit: States Attorney's Office
Screenshot of enhanced surveillance video shows Justin Reed pointing a firearm at an unmarked vehicle blocking his driveway on Nov. 4, 2020. Jacksonville officers were in the car and shot Reed to death. 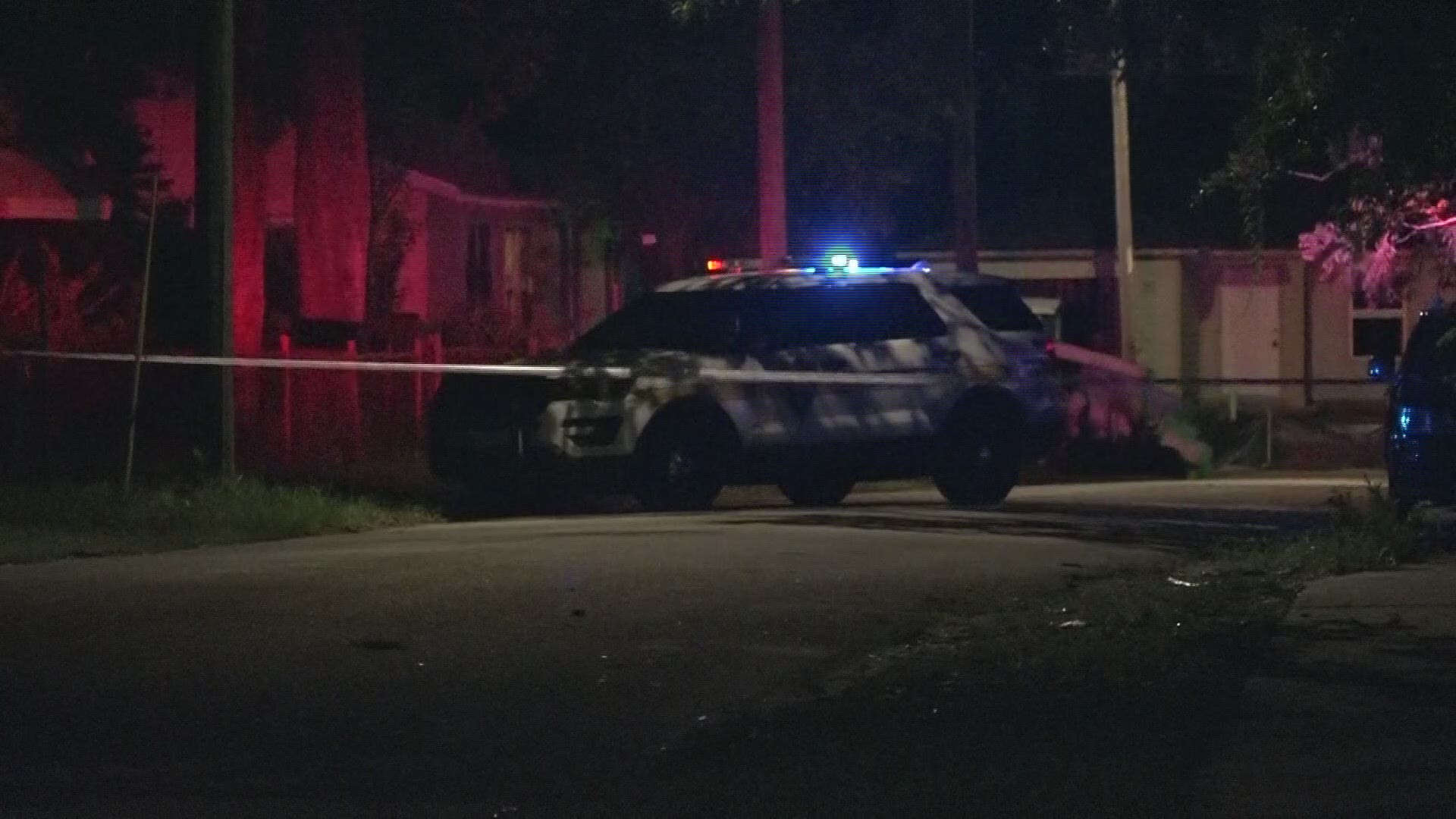