Convicted at 17, former Lee High football star gets a second chance at life and freedom

Juvenile defendant released after 29 years behind bars: “People can change.” 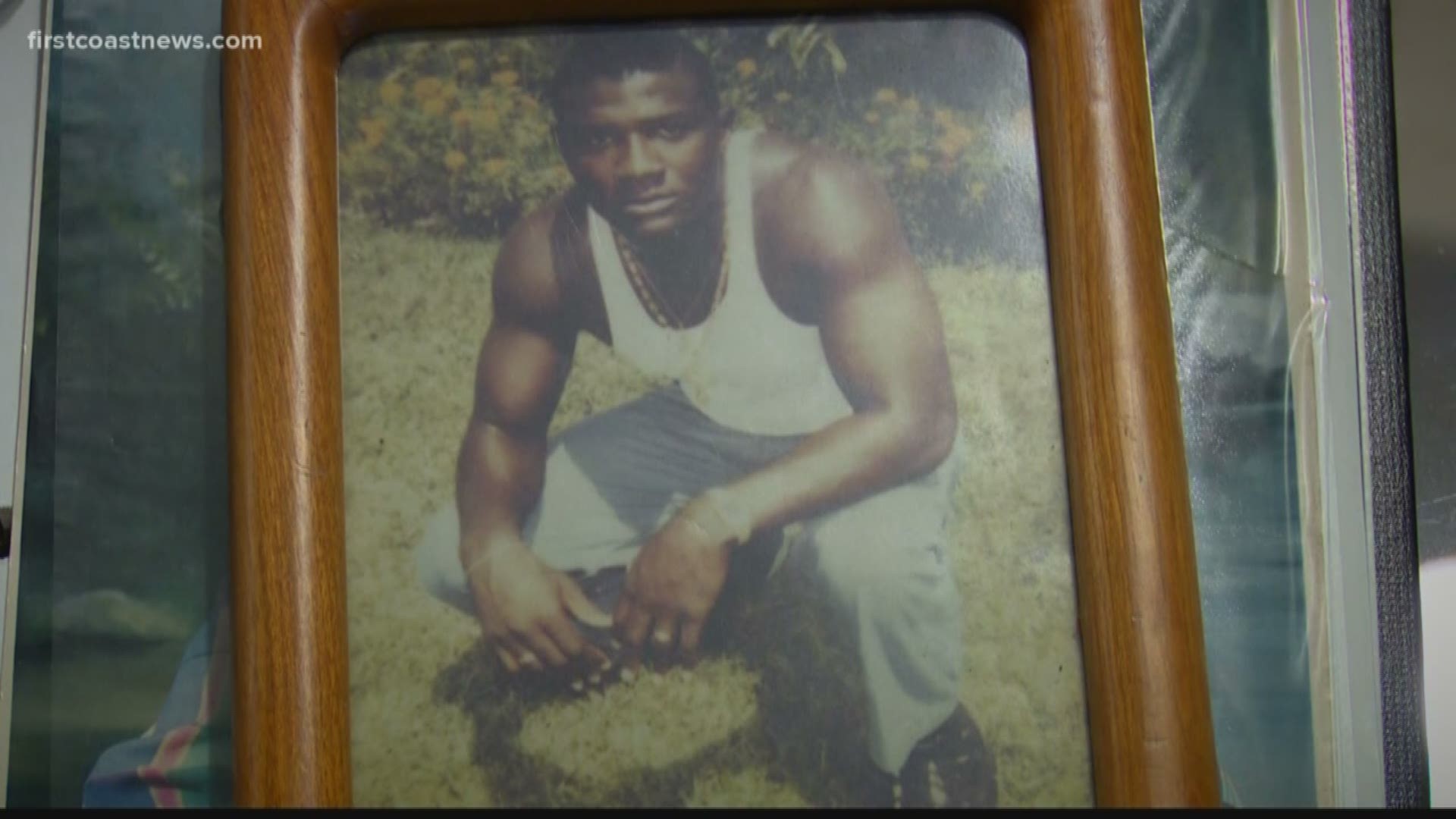 JACKSONVILLE, Fla — Jackie Cogdell stared out at the moon from his own bed for the first time in three decades. “I’m really out,” he thought.

He couldn’t fall asleep that first night, and every day since he’s been up before dawn -- a habit born of 29 years on prison time.

Convicted at 16 for murdering another teenager in a botched robbery attempt, Cogdell, now 46, grew up behind bars. He is one of hundreds of former teen defendants whose life sentences got a fresh look in light of evolving brain science and new case law.

On Sept. 12, Circuit Judge Bruce Anderson resentenced Cogdell to time served. A few hours later he stepped out of the Duval County Jail into his mother’s arms.

“I believe in second chances” he said. “Many people look at that as: you’re a monster, you need to be taken out of society and left probably to die in prison. What I want to impart to people is: people can change. People can change.”

Credit: WTLV WJXX
Jackie Cogdell with his mother and his original lawyer, now Public Defender Charlie Cofer, moments after his release in September 2019.

There was no question he would go to college. The Lee High tight end was being courted by five Division 1 schools, including Clemson, and his work ethic was strong. The night of the shooting he hadn’t planned on anything but sleep – the two-a-day summer football practices had worn him out.

But when a teammate and two cousins stopped by, they urged him off the couch and into their car for a few hours of drinking and joyriding. He went along. And when one of them suggested borrowing a gun to steal the fancy rims off another teen’s car, he went along with that, too.

“The officers came to the house,” Cogdell’s mother Juanita Cogdell Toney recalls. “They asked me did I have a son? I said yes. They wanted to come inside. And they arrested him. And they told me he shot somebody.”

At the time, nobody – Cogdell included – knew the shot he’d fired was fatal. When it became clear that he’d murdered 19-year-old Brandon Lee Knowles, Cogdell was already in custody.

His fear and anxiety were overwhelming.

“My hair even fell out,” he recalls. “Two big holes -- you could look all the way to my scalp. It fell out. It was just depression.”

Credit: WTLV WJXX
Jackie Cogdell hugs attorney Teri Sopp outside his Prisoners of Christ house. "This will always be my favorite person," he laughs.

Because the death penalty was on the table, at the urging of his then public defender Charlie Cofer, he pleaded guilty. At 17, he was sentenced to life in prison with a mandatory 25 years. After that, parole was a possibility – at least in theory.

Circuit Judge Bruce Anderson agreed, albeit in somewhat more measured language. In his order, he wrote, “It is clear from the evidence that the process of parole review does not presently meet acceptable constitutional or statutory requirements.”

Anderson heard three days of testimony in the case in January. When he issued his order in September, he based it in part on the fact that the parole system did not offer Cogdell an opportunity for meaningful review – as required by the U.S. Supreme Court.

But he also relied on the emerging science of juvenile brain development.

“Youth is more than a chronological fact,” Anderson began his order, each sentence lifted directly from U.S. Supreme Court case law on juveniles. “It is a time of immaturity, irresponsibility, impetuousness and recklessness. It is a moment and condition of life when a person may be most susceptible to influence and psychological damage. And its signature qualities are all transient. Because of the unique transitory characteristics that teenagers display, teenagers are ‘constitutionally different from adults for purposes of sentencing.”

Teri Sopp, Cogdell’s current attorney calls it “one of the most powerfully written orders I’ve ever seen."

"He gets it," she says. "Children don’t have developed brains. That’s why you can’t rent a car if you’re 25, you can’t sign contacts theoretically, can’t vote or sign up for the Army.”

Judge Anderson noted in his order that Brandon Knowles' mother had forgiven him, and had sent him a letter in prison saying so. And he noted Jackie Cogdell’s remorse. He testified he often thinks of his victim’ mother, and how she is alone as she gets older.

“I think about him and his parents, that he is not there as they are getting older to care for them,” Cogdell said at the January hearing. “I am sorry. I am just so sorry that I did that. I can’t undo it, but I am just so sorry I did it.”

“Not a day of his life goes by that he doesn’t think about and doesn’t pray for them,” Sopp says. “Every single day he thinks about the person whose life he took.”

Credit: WTLV WJXX
Jackie Cogdell and his new wife Suzanne. He says some people urged him to wait to get married, but he says he wanted to “be right standing with God.”

Jackie Cogdell wasted no time. Within days of his release, he had a driver’s license, a job, and a wife.

He met Suzanne though a cousin, years before he had any real hope of release. Though he must live in court-ordered housing for the first years of his freedom, he wanted to be able to marry Suzanne to “be right standing with God.”

“I had a few people say why don’t you wait a little while,” Cogdell says. “But I want to do it the right way, so I can say to my kids: we waited until we got married to have sex.”

By this time next year, he hopes to have a child on the way. He also wants to help out with his eight nieces and nephews left fatherless when his younger brother Arron Dion Cogdell was murdered in June 2016.

“They took my baby away from me,” says Juanita Cogdell Toney wiping tears. “This one I struggle with every day,”

The crime remains unsolved – though the family’s been told there are witnesses. “In the street there’s a code of silence,” Toney says. “They won’t go into court and point say: this is the person who committed the crime.”

Being a mother of both murder victim and perpetrator gives Toney a unique, if unenviable perspective. But she says she always grieved for Jackie’s victim, even before her other son became one.

“I always thought about that, I always prayed for the other parent: Lord have mercy on him,” she says. “One thing you have to remember is I’m able to see Jack. They’re only able to see a headstone.”

For her, having her oldest son back is a gift made more dear by her other losses. "It's just overwhelming joy to see my son freed after 29 years, able to start a new life," she says.

"We all make mistakes, but God is going to give us a second chance."