"Assuming he survives long enough to have a trial, Mr. Bryan's ability to attend ... would be greatly impaired if this issue is not addressed," his attorney wrote.

One of the three men charged with murder in the February 2020 death of Ahmaud Arbery is requesting to be released from jail while awaiting trial due to his blood pressure being uncontrollably high, according to a document filed in Glynn County Superior Court on Dec. 31, 2020.

Defendant William "Roddie" Bryan's attorney, Kevin Gough, is asking for a judge to grant a second bond hearing, saying Bryan's blood pressure was 190/100 as recently as Dec. 30, despite treatment rendered by the Glynn County Detention Center.

"He has already seen a cardiologist, and is medicated, but the sporadic checks of his blood pressure regularly reflect blood pressure in excess of 180/100," the hearing request says. "Assuming he survives long enough to have a trial, Mr. Bryan's ability to attend, follow along and participate meaningfully in his own trial would be greatly impaired if this issue is not addressed."

Bryan remains in jail, along with Gregory McMichael and Travis McMichael. All three have pleaded not guilty to the various charges they face in Arbery’s shooting death.

Arbery was shot and killed in Brunswick last year. His death gained nationwide attention after cellphone video showed him running through the Satilla Shores neighborhood, pursued by the three white men in trucks before being killed.

The men say they thought he was burglarizing local homes. His family maintains he was jogging.

Bryan is also the subject of a child sexual molestation investigation in Camden County, according to the Georgia Bureau of Investigation.

No date for a trial has been set.

You can read the full hearing request filing below. 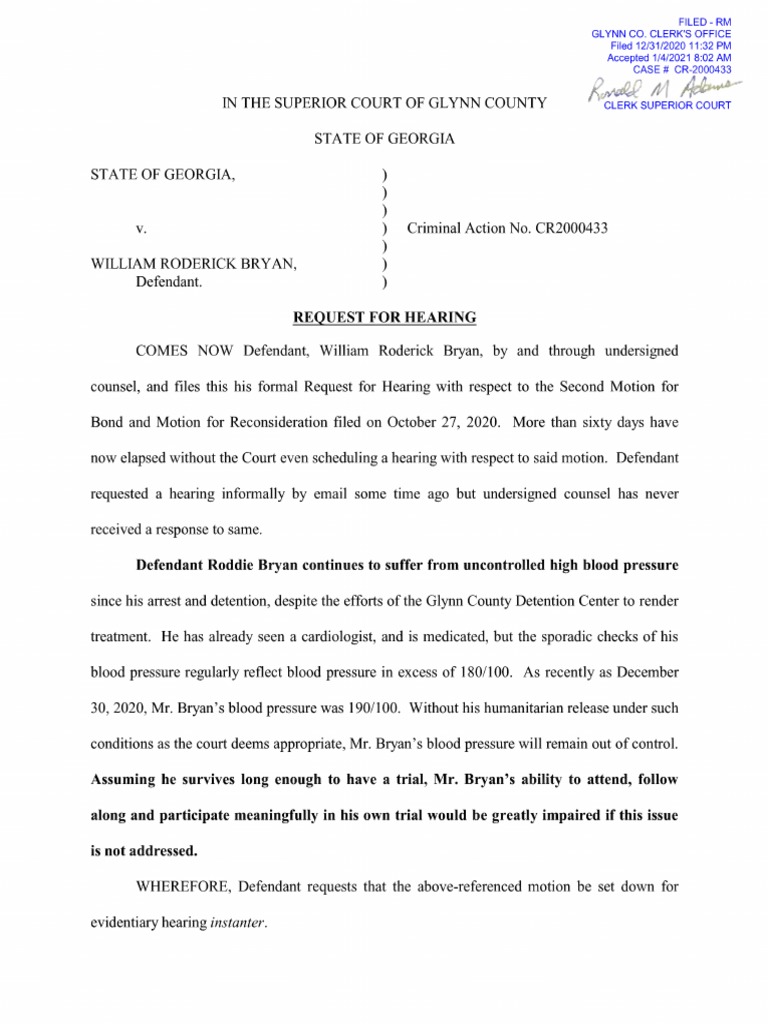 Roddie Bryan request for hearing due to uncontrolled high blood pressure | Legal Procedure | Criminal Justice
Filed 12/31/2020 11:32 PM Accepted 1/4/2021 8:02 AM CASE # CR-2000433 STATE OF GEORGIA STATE OF GEORGIA, ) ) ) v. ) Criminal Action No. CR2000433 )WILLIAM RODERICK BRYAN, ) Defendant. ) COMES NOW Defendant, William Roderick Bryan, by and through undersigned counsel, and les this his formal Request for Hearing With respect to the Second Motion for Bond and Motion for Reconsideration led on October 27, 2020.