Carey Marie Wilson was initially charged May 27 with two counts of animal cruelty after a dog was found with an arrow shot through his skull 11 days earlier. 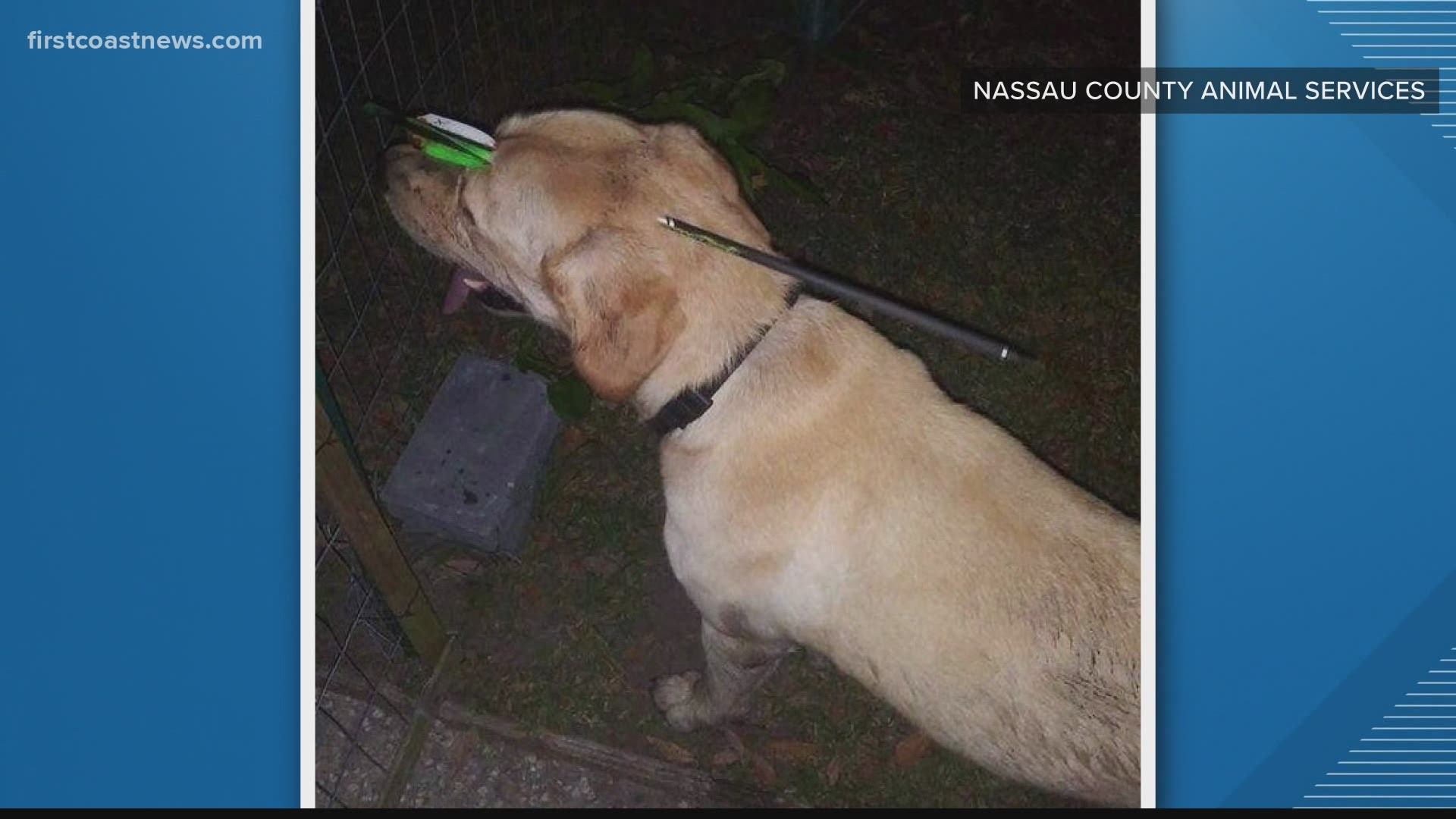 NASSAU COUNTY, Fla. — A 38-year-old Hilliard woman has been sentenced to 15 days in jail for shooting a dog in the head with a crossbow, a punishment called "pitiful" by an animal-rights group.

Carey Marie Wilson of Missouri Street was initially charged May 27 with two counts of animal cruelty after a dog was found with an arrow shot through his skull 11 days earlier, according to the Nassau County Sheriff’s Office. She entered a no-contest plea Tuesday on one count of animal cruelty and was sentenced to jail, due to report on May 14, according to the Sheriff's Office.

The case garnered lots of attention from animal-rights groups as the Labrador mix, nicknamed Unicorn, was treated at the Nassau County Animal Services facility. The sentence was scorned Thursday by In Defense of Animals, an animal-protection organization based in California.

Wilson could have been sentenced to up to five years with a $10,000 fine but received 12 months of probation in addition to the 15 days behind bars.

“To say this outcome is disappointing would be a gross understatement,” said Doll Stanley, director for the group's "Justice for Animals" campaign. “It’s extremely frustrating to see the court system hand out such a weak sentence for the deliberately cruel and violent treatment of an innocent animal. The only silver lining here is that Unicorn survived and is now getting the care he deserves.”

Nassau County Animal Services said it sent an investigator to Hilliard about 2 a.m. May 16 following an emergency call about the dog. They found the then 4-year-old dog with a 16-inch-long arrow’s vanes sticking out between his eyes and its shaft speared out behind his ears. Staff rushed him to BluePearl Pet Hospital’s emergency room in Jacksonville, where the arrow was surgically removed and stitches applied.

An anonymous tip led deputies to Wilson’s home the next week, her arrest report said. Wilson said she had previous issues with the dog trying to kill her chickens. When she saw him urinating on her car’s tires, he was shot with the crossbow.

“At the time of the incident the dog was not being aggressive,” the report said.

Wilson told animal-control officers multiple times “that she was wrong,” according to the report.

Staff at Animal Services said Unicorn is friendly, gentle and knows commands. The shelter took applications to foster him and said it would waive the adoption fee if the person fostering him through medical care decided to keep him. The shelter also sought donations to pay for Unicorn’s surgery, medication costs and heartworm treatment.

In Defense of Animals officials said almost 15,000 supporters wrote to State Attorney Melissa Nelson after the arrest, urging her to prosecute Wilson to the fullest extent.