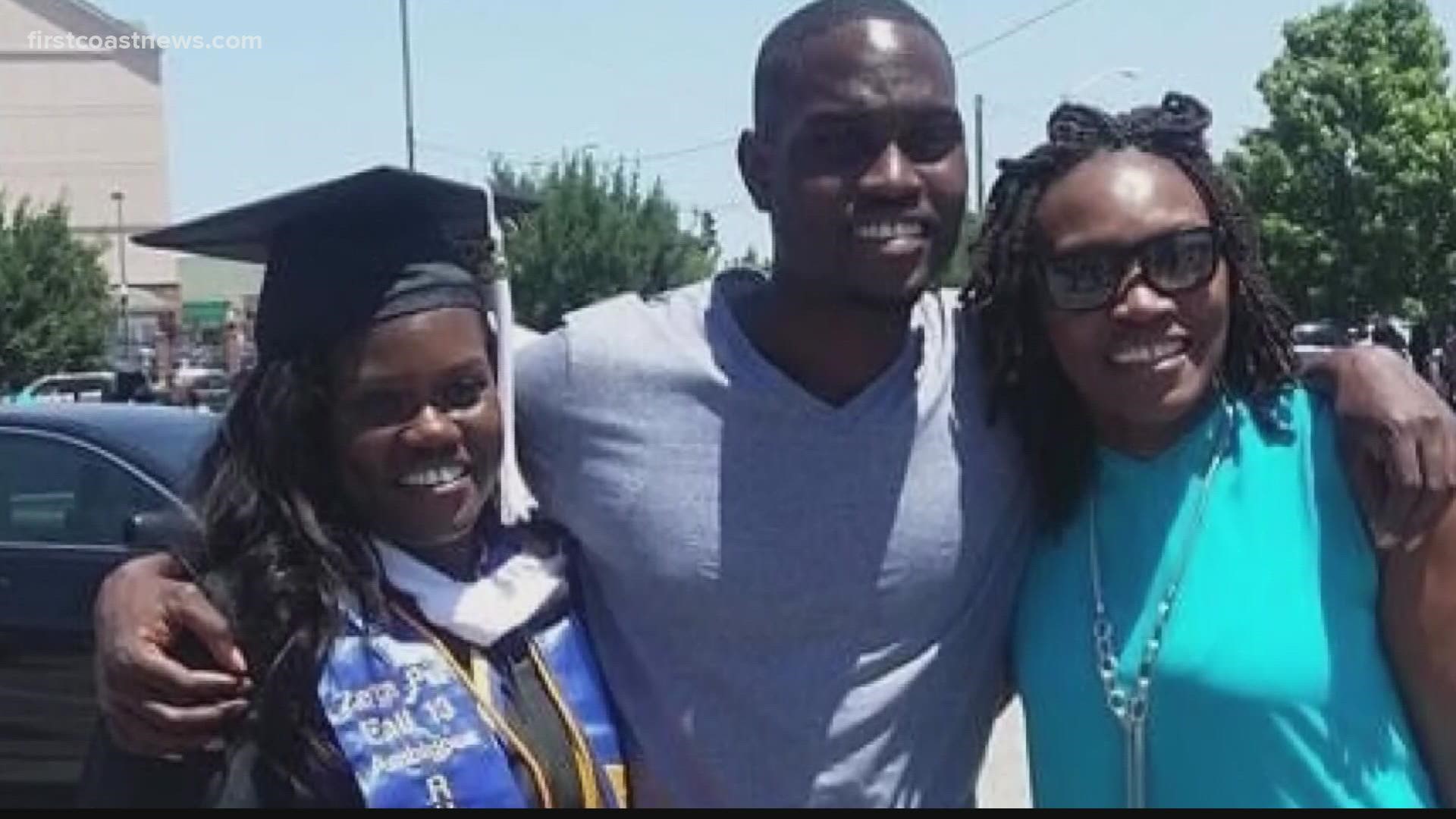 JACKSONVILLE, Fla. — The parents of Ahmaud Arbery along with their attorneys, Ben Crump and Lee Merritt, held a virtual press conference Friday to publicly comment on the grand jury’s decision to indict a former prosecutor in the case.

Jackie Johnson, the former Brunswick District Attorney, has been indicted on charges related to the investigation surrounding the shooting death of Arbery in February of 2020.

The indictment accuses Johnson of violating her oath of office by "showing favor and affection to Greg McMichael during the investigation" by directing Glynn County Police officers that his son, Travis McMichael, not be placed under arrest.

Greg McMichael used to work for Johnson's office. Both men are charged in Arbery's death, along with William Roddie Bryan. Travis McMichael is accused of shooting Arbery.

“I’m speechless," Wanda Cooper-Jones, Arbery's mother, said. "Unfortunately, Ahmaud is not here with us today, but Ahmaud, losing Ahmaud, it will change some things here in the state of Georgia. I’m just very thankful,” she said reacting to the indictment.

The indictment goes on to say Johnson recommended Waycross DA George Barnhill to the Georgia Attorney General's Office to take over, and did not disclose that she previously reached out to Barnhill for help on the case.

"This decision by the grand jury we hope will send ripple effects through the legal community," Merritt said.

“We can make sure his death was not in vain," Crump said. "The indictment sends a clear message to those in law enforcement and those in the justice system whose actions and ethics fail to meet the standards of their office," Crump said.

Arbery's parents called the indictment a win. They said the part that reads that Johnson failed to "treat Ahmaud Arbery and his family fairly and with dignity" stood out to them the most.

"They failed. They not only failed Ahmaud, but they failed the entire family," Cooper-Jones said.

"They didn’t give Ahmaud, and the family, didn’t treat us with dignity. And that really said a lot because Ahmaud was killed. There were 72 days, like Attorney Merritt said earlier, that there was no arrest and at the same time Ahmaud was killed and nothing was done," Cooper-Jones said.

Cooper-Jones and Arbery Senior said they want Johnson in jail.

"She needs to have the same repercussions as the McMichaels and Roddie Bryan. Like was said earlier, she didn’t pull the trigger, but she’s just as accountable as the three guys who did this," Cooper-Jones said.

"It was just so wrong. This was the community that I raised my children in and to find that we had elected officials that were so, that were not for all people, it was very surprising. When you’re elected to do the job, we expect you to do the job," Cooper-Jones said.

Both Cooper-Jones and Arbery Senior said the indictment is a step in the right direction, but they won't stop until justice is completely served for their son.

"I'm very appreciative at the way things are going, but at the end of each day, Ahmaud is never coming home," Cooper-Jones said.

"The path to justice for Ahmaud Arbery and his family has been a long and arduous one, but the indictment is yet another step in the right direction," Crump said. "Former DA Johnson may not have pulled the trigger on the day Ahmaud was murdered, but she played a starring role in the coverup. Ahmaud was stalked, gunned down and his killers were allowed to freely walk the streets, for months. And why? Because DA Johnson wanted to protect one of Ahmaud's killers," he said.

Gregory McMichael, Travis McMichael and William Roddie Bryan have pleaded not guilty to murder charges. Their trial is scheduled to start next month.

A police report indicates that on Sunday, Feb. 23 around 1 p.m., officers responded to a shots fired call at the intersection of Satilla and Holmes drives. Glynn County Police found Arbery dead at the scene.

Greg McMichael said there had been several break-ins in the neighborhood. He told police he saw Arbery running down the street and he asked his son, Travis, to help him confront Arbery. The two allegedly got a shotgun and handgun because they “didn’t know if Arbery was armed or not.”

The police report indicates the two men got into their truck and saw Arbery running. They attempted to cut him off, but he turned around and began running in the other direction. They continued to follow Arbery, they shouted “stop, stop, we want to talk to you.”

When they pulled up next to Arbery, Travis McMichael got out of the truck with the shotgun. According to statements, that’s when Greg McMichael said Arbery attacked his son and the two men started fighting over the gun. Then, Travis McMichael fired his weapon.

This case put into the spotlight because a video surfaced which appears to be from the incident. The video went viral across social media platforms.

The video appears to have been taken from a car that was riding behind the McMichaels and traveling along the same road Arbery was jogging on.

In it, you see a man that's assumed to be Arbery near a white truck parked in the street. Then, yelling can be heard, as the camera drifts out of focus. When it comes back onto the scene, a gunshot can be heard, then a second, then the man who has been identified as Arbery can be seen struggling with a man for what appears to be a shotgun, as the camera again drifts. You hear a third shot as the struggle continues.

The other man can be seen stepping back and the man believed to be Arbery stumbles forward and falls.