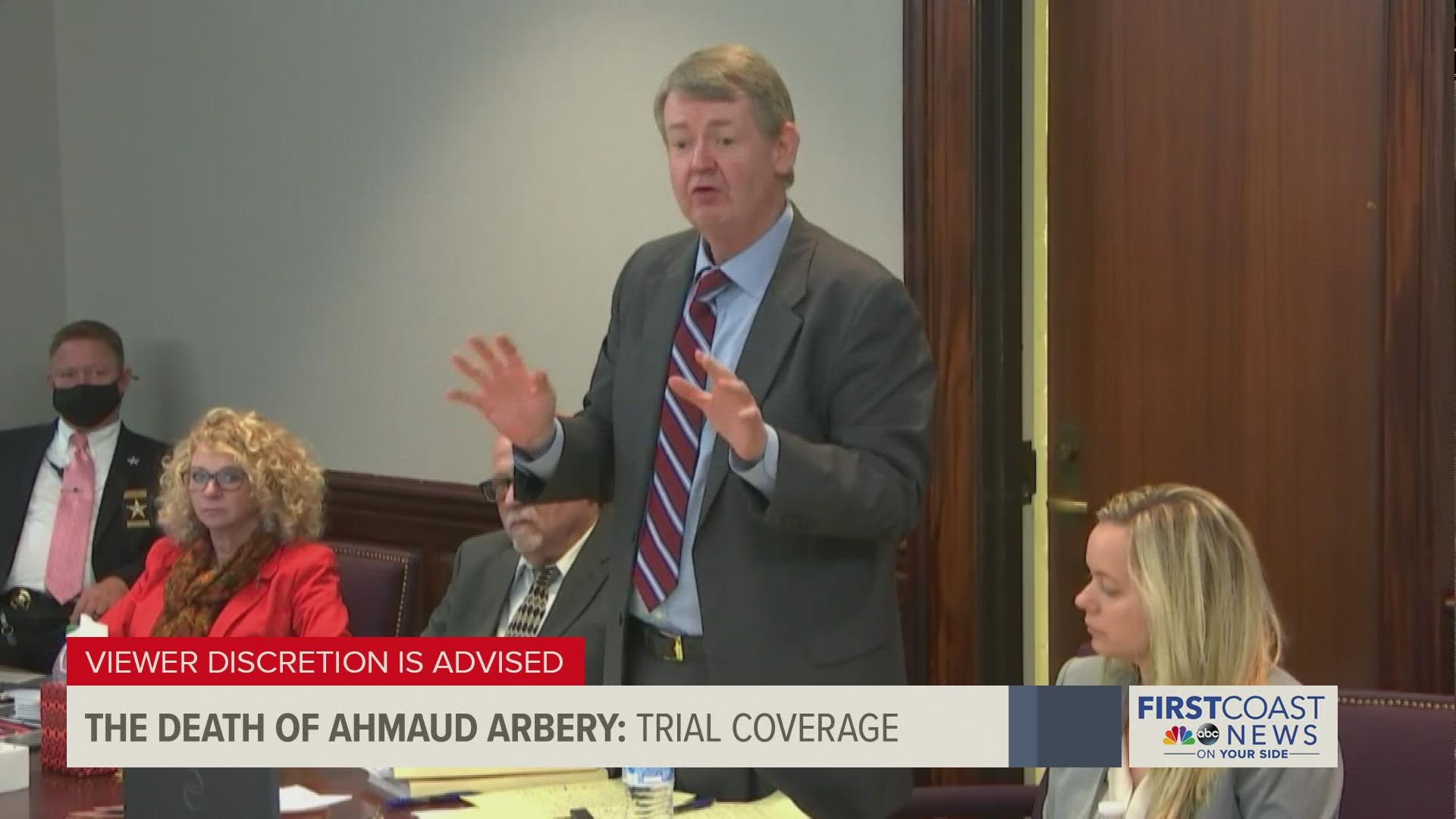 BRUNSWICK, Ga. — **WARNING: Videos contained in this article may be disturbing to some.

The fifth day of testimony in the trial in the death of Ahmaud Arbery continued Thursday in Brunswick.

During a vigil outside the courthouse Wednesday to support Arbery's family, the Rev. Al Sharpton said "Georgia law is on trial," calling Arbery's death a 21st century lynching.

Travis McMichael, his father Gregory McMichael and William "Roddie" Bryan, who recorded the video, are all charged with murder in Arbery's death.

The time stamps below are approximations.

2:20 p.m.: "If a bunch of folks came in here dressed like Colonel Sanders with white masks sitting in the back, I mean that would be..." Gough starts.

Judge interrupts him, saying he is not making a blanket ruling based on attendance as long as everyone is respectful and not a distraction.

Judge says Rev. Al Sharpton wasn't a distraction, and no one was even really aware he was there.

"If a bunch of people came in here dressed as Colonel Sanders ..." Gough starts. Judge: "I am not making a blanket ruling based on attendance" as long as everyone is respectful, not a distraction and said Sharpton wasn't a distraction and no one was even really aware he was there

"Al Sharpton managed to find his way into the back of the courtroom, I'm guessing he was somehow there at the invitation of the victim's family in this case. I have nothing personally against Mr. Sharpton and my concern is that it's one thing for the family to be present, it's another thing to ask for the lawyers to be present, but if we're going to start a precedent starting yesterday, we're going to bring high-profile members of the African American community into the courtroom to sit with the family during the trial in the presence of the jury... I believe that's intimidating..., " said Gough.

"Obviously, there's only so many pastors they can have, and in the fact that their pastor is Al Sharpton right now that's fine, but then that's it. We don't want any more black pastors coming in here..."

Not every day of testimony is electric. We're watching a pre-recorded depo of Larry English, owner of property #AhmaudArbery was on before he was killed. Audio is awful, prosecutor & English both masked, English has a thick accent. Jurors have transcripts --but not media @FCN2go pic.twitter.com/KWskpuoyC3

11:30 a.m.: Jury panel comes back in. More video is played. During the break, Wanda Cooper Jones was outside the courtroom, she has not come back in since she left prior to the break.

The focus of the jury still going strong. One juror looking around, off to the side once or twice, but otherwise everyone is focused

10:25 a.m.: One juror takes notes when Larry English gives his definition of "plundering". Says it means just looking around, not taking anything

Throughout the presentation of the video, the jury is maintaining their focus, choosing mostly to watch and take it in rather than take notes.

10 a.m.: Court is playing testimony from Satilla Shores homeowner Larry English who gave a recorded deposition ahead of the Oct. 18 trial due to health issues.

English owned the home under construction that Arbery is seen entering on surveillance video on Feb. 23, 2020, shortly before he was shot and killed by Travis McMichael.

RELATED: 'Wish I would’ve took him out and not get him shot': Investigator testifies about interview with suspect in Ahmaud Arbery murder

RELATED: Timeline in shooting death of Ahmaud Arbery, what you should know about trial of accused killers

2:26 p.m.: Lowry reads transcript of interview with Roddie Bryan. Says Bryan said he thought Arbery was trying to reach for his car door. "I mean I can't say for sure. He wasn't on the door. I didn't give him a chance to get to the door," Bryan reportedly said.

Bryan continues in interview "I angled him off the side of the road, you know, and I kind of went past him. Because I didn’t hit him. Wish I would’ve took him out and not get him shot. But, you know, he kinda got past me a little bit.”

Lowry says Roddie Bryan said he tried to back into Arbery

2:24 p.m.: Asked Bryan to come to police HQ for interview, said Bryan was willing to go, signed consent for his phone to be searched. State asked Lowry about interview with Bryan.

1:41 p.m.: One of the younger female jurors seems to be taking notes while Lowry is questioned about the smudges and prints found on Bryan's truck.

1:10 p.m.: Judge Walmsley is back on the bench. Rev. Al Sharpton is in the courtroom, sitting with Marcus Arbery Sr. and attorney Ben Crump. So far, all’s been quiet in the gallery today. And haven’t seen any notable reactions or movements from the jury.

12:20 p.m.: Wanda Cooper-Jones and Marcus Arbery Sr stand together. Cooper-Jones: “In the beginning, I didn’t understand why God placed this assignment on me, but then I realized God would never fail me”

11:17 a.m.: Rubin asks if Albenze believes Ahmaud spotted him outside. He says perhaps. Albenze says if that was the case, and perhaps if Ahmaud didn't see him, maybe the events would have not occurred. Albenze agrees that it weighs heavy on his heart.

11:06 a.m.: Defense attorney Bob Rubin starts cross-examination. Asks Albenze if him calling GCPD has caused concerns, issues for him. Says yes, including recently calls for attacks on him.

11:05 a.m.: Albenze said he hadn't been victim of property crimes in neighborhood in 2019, 2020, but was concerned hearing about crimes through Satilla Shores' Facebook page.

11 a.m.: Albenze said he walked inside home after he hung up with GCPD. Never talked to the McMichaels before the shooting about it. But he said he heard gunshots a few minutes later, rode a bike to the scene and saw Arbery laying in the street. "It's kind of a shocking scene." Rode bike home

10:49 a.m.: Albenze said he recognized Arbery from home under construction's surveillance video, went inside, grabbed his phone and his pistol, then saw Arbery moving around in the house, couldn't tell what he was doing from inside the home. Says he called GCPD non-emergency number.

When asked why he didn't call 911 vs. non-emergency number, said "I didn't see an emergency." Call played for court.

10:43 a.m.: Albenze says he called non-emergency number at 1:08 p.m. day of shooting. The first officer to respond who testified Monday said the call was for a "suspicious Black male in the neighborhood." Call played earlier in trial. Dispatch asks what the man (later ID'd as Arbery) is doing wrong. He said he is running.

Bryan is seen writing notes down.

10:33 a.m.: Judge told jury he plans to keep court open tomorrow, Veteran's Day, due to slow pace of trial so far. Asked jury to give him a note if they have issue with that

10:03 a.m.: Sheffield asks if Nohilly interviewed Travis and for how long. Prosecutor objects to questioning about Travis interview because they say yesterday the state said they wouldn't use Travis interview, but defense wants to use it. State says it looks like they're hiding Travis' statement from jury.

9:56 a.m.: Hogue asks Detective *Roderic Nohilly if he uses verbal commands to get someone to stop during arrest. Asks if person is still not compliant, "you draw your weapon?" Nohilly: "No, I don't just pull my gun."

9:37 a.m.: State's seventh witness: Sergeant Roderick Nohilly with GCPD. He reportedly knew Greg McMichael on a professional basis when Greg worked as an investigator with the DAs office. Also interviewed Greg after the shooting.

9 a.m.: Court is scheduled to resume. During the lunch break, the Rev. Al Sharpton is scheduled to be outside the courthouse along with Arbery's family and family attorneys to hold a prayer vigil.