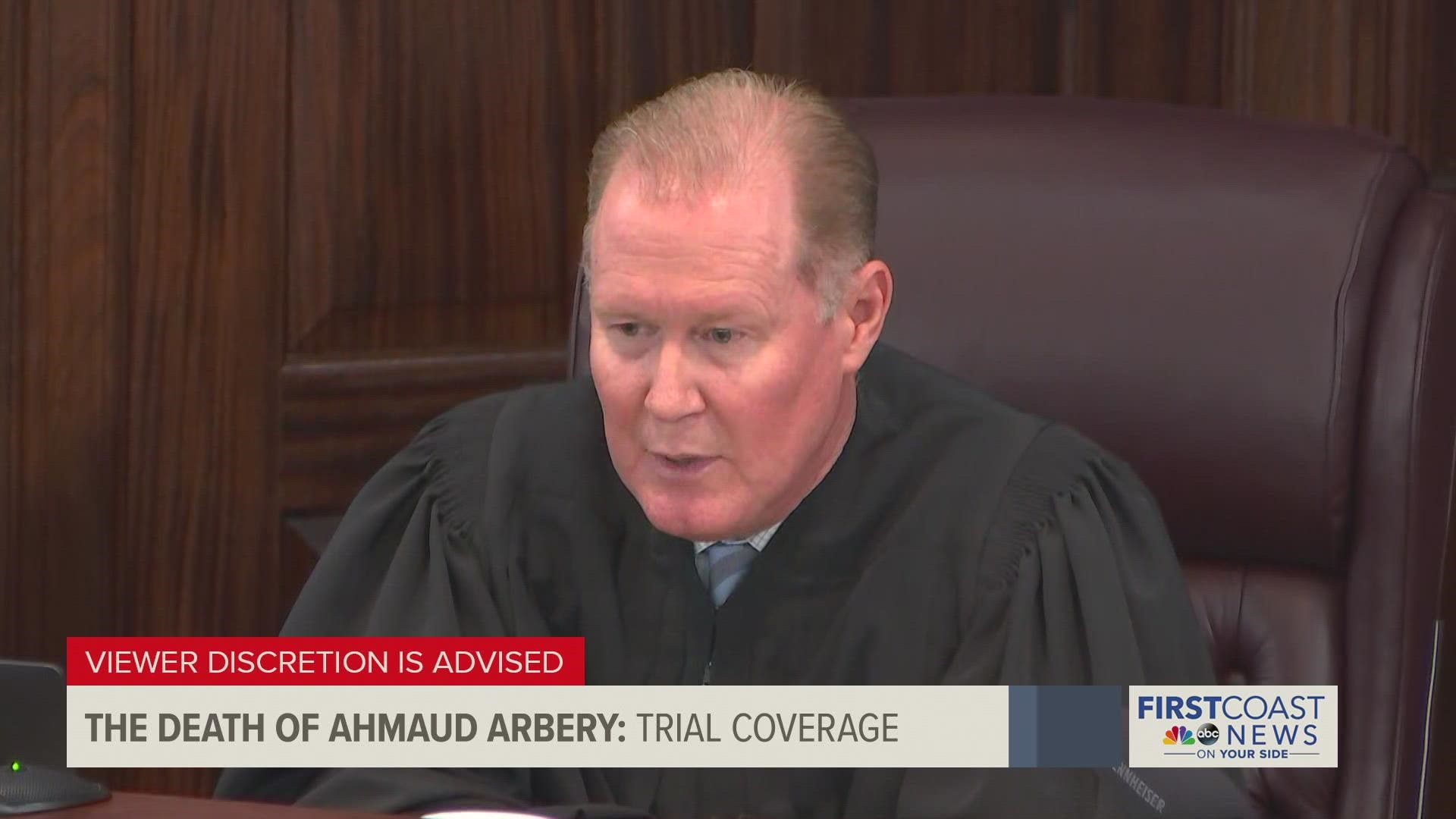 BRUNSWICK, Ga. — **WARNING: Videos contained in this article may be disturbing to some.

The trial in the death of Ahmaud Arbery continued Tuesday morning in Brunswick after the jury heard from three witnesses Monday, including some of the first law enforcement officers to arrive on the scene after Arbery's death.

The time stamps below are approximations.

4:25 p.m.: Judge Timothy Walmsley steps off the bench in a flurry, saying that Jason Sheffield, attorney for Travis McMichael, showed a lack of respect for what the court is trying to do.

"Mr. Sheffield, you can agree or disagree with this court, that is your prerogative, but to act in the way you just did in front of this panel, I don't care if you like my rulings or not, if you like me or not, but in this court, the Superior Court, it is (incomprehensible) ... that counsel show at least respect for what the court is doing."

4:20 p.m.: (VIA POOL) As Pogue was doing his cross, Sheffield began filling a couple of big pages on his board with the following notes in large letters – it was all very visible to the gallery.

Written in an interesting jumble of upper- and lower-case letters was:

4:02 p.m.: Defense to Marcy: talks about what Greg was saying about break-ins in the neighborhood, the fear of Arbery having a gun. Asks Marcy if Greg said he was trying to stop Arbery so that he could be arrested. Marcy answers yes.

Wanda Cooper-Jones overheard saying "arrested for what, though?" according to pool.

3:11 p.m.: Defense attorney Hogue: talking about statements Greg McMichael made to Marcy: Hogue says Greg said to Marcy the day of the shooting if Arbery had just turned around, said where he was coming from "it would be a whole different ballgame."

2:01 p.m.: BACK FROM LUNCH: State continues to question Marcy. Marcy says he was the one who downloaded the video of the shooting from Bryan's phone. State shows Marcy video of Arbery in home under construction. Asks if Marcy sees him take anything, responds no.

1:45 p.m.: Defense says state trying to prove Greg is lying about number of crimes in area. State says she's only trying to show there was just 1 burglary call, 4 entering autos. Gough: suggesting this "was not a neighborhood on edge" is inappropriate.

11:57 a.m.: A prosecutor asks Marcy if Gregory McMichael ever told him he was making a citizen's arrest, trying to detain Arbery. Marcy says no, just like Brandeberry said no when asked the same question and Minshew when asked whether Bryan mentioned a citizen's arrest.

11:17 a.m.: The state is now questioning its sixth witness, Detective Parker Marcy with the Glynn County Police Department. Marcy says an officer brought Travis McMichael to the police headquarters, where they took more photos of him with blood on him. Gregory McMichael arrived at the headquarters around the same time and told Marcy he knew Bryan for years.

10:31 a.m.: The defense begins its cross-examination of Brandeberry. Travis McMichael's attorney Jason Sheffield plays some of Brandeberry's body camera footage showing his partner talking to McMichael. McMichael tells her "Just do whatever you have to do." Sheffield argues this shows he is being cooperative, not trying to flee the scene.

Sheffield argues this shows Travis is being cooperative, doesn't try to flee scene.

10:05 a.m.: A prosecutor asks Brandeberry if Gregory McMichael ever told him he was making a citizen's arrest and trying to detain Arbery. Brandeberry says no. The state asked Officer Minshew the same question yesterday regarding Bryan, and he also said no. This conflicts with the defense's key argument that the men were making a citizen's arrest.

9:52 a.m.: The state is questioning the fifth witness, Glynn County Police Department Officer Jeff Brandeberry, who responded to the scene the day Arbery was shot and killed. He says Gregory McMichael told him Arbery broke into a house under construction "several times" and it was on video.

State questioning fifth witness, Officer Jeff Brandeberry with GCPD. Brandeberry responded to the scene the day of the shooting. Gregory McMichael told him Arbery broke into the house under construction "several times" and it's on video. "Nobody could ever catch him."

9 a.m.: Court is scheduled to resume.

12:13 p.m.: The state is now showing video of the shooting taken by Bryan. Unlike Friday when there were technical issues, the video includes audio and three shotgun blasts can be heard.

12:07 p.m.: On the day of the shooting, Minshew says, Bryan told him Arbery looked tired and stopped at one point to catch his breath. "It was almost like the Black guy was tired of running," Bryan told Minshew that day.

11:59 a.m.: Minshew says Bryan told him he was working on his porch when he saw a Black man run by and a white truck following him. Bryan said he didn't recognize the "Black guy" or the men in the truck, Minshew says.

11:57 a.m.: The jury and witness are brought back in. Minshew says he spoke with Bryan at the scene, asking him "You're a passerby?" Bryan said "Not necessarily," then told Minshew what happened and that he was involved in the chase.

11:43 a.m.: The judge reprimands defense attorneys Rubin and Sheffield for "throwing shots" at the other side. He says he has mentioned this before and says they are all professionals in this courtroom. The judge says he wants to hear from one attorney per issue per witness, not each legal team, since the defense has a separate set of attorneys for each defendant.

11:41 a.m.: The judge excuses the jury while defense and prosecution argue over playing body camera footage.

11:39 a.m.: Arbery's mother, Wanda Cooper-Jones, says to the person next to her during Minshew's testimony "He didn't even go over to help." When body camera video is admitted into evidence, Cooper-Jones leaves the courtroom. The prosecution says body camera footage won't be played, but it is in the record so that Minshew can testify about it.

11:26 a.m.: When asked why he didn't attempt CPR, Minshew says he was the only officer on scene, didn't have other officer to watch the scene or watch his back, didn't know the circumstances of scene and didn't have proper equipment to tend to Arbery. He says he couldn't "switch to medical" and watch the scene.

11:19 a.m.: Minshew says he dispatched emergency medical personnel to the scene when he saw Arbery's body in the road. He says he also focused on making sure there were no immediate threats on the scene and preserving the scene's integrity.

11:05 a.m.: The state begins questioning its third witness, Officer R. Minshew, the first to respond to the shooting.

10:54 a.m.: Ramos answers yes when the defense asks if she noticed whether Travis McMichael was in a "distraught state" after the shooting. She also says yes when asked if he said he was not OK when she asked. Ramos says she came across Travis McMichael again the day after the shooting when she was canvassing the area for witnesses. She says he was still in a distraught state.

10:41 a.m.: Outside the courtroom, Arbery's Aunt Diane hugs a woman who speaks in support of the Arbery family, saying things would be different if it were three Black men in pickup trucks chasing a white man instead of the three white defendants and a Black man.

10:20 a.m.: Several jurors "squirm in their seats" as the first few photos of Arbery are shown. Arbery's mother, Wanda Cooper-Jones, "exhales quietly" as Ramos describes the photos showing gunshot wounds to Arbery's chest and wrist. Ramos says one of the bullets went through the window of a nearby house and stopped in the living room wall.

9:26 a.m.: Marcus Arbery Sr. leaves the courtroom as prosecutors question Ramos due to the possibility of graphic crime scene photos and videos.

The first witness of the day is on the stand, Glynn County Police Department Investigator Sheila Ramos.

9:08 a.m.: Wife of Gregory McMichael and mother of Travis McMichael, Leigh McMichael, was waiting outside the courtroom for it to open. She is in the courtroom with her lawyer. Arbery's father, Marcus Arbery Sr., enters in Barbara Arnwine of the Transformative Justice Coalition. They are seated in the last row of the public gallery.

RELATED: 'He said ... it was almost like the Black guy was tired of running' | First officer to respond testifies in death of Ahmaud Arbery trial