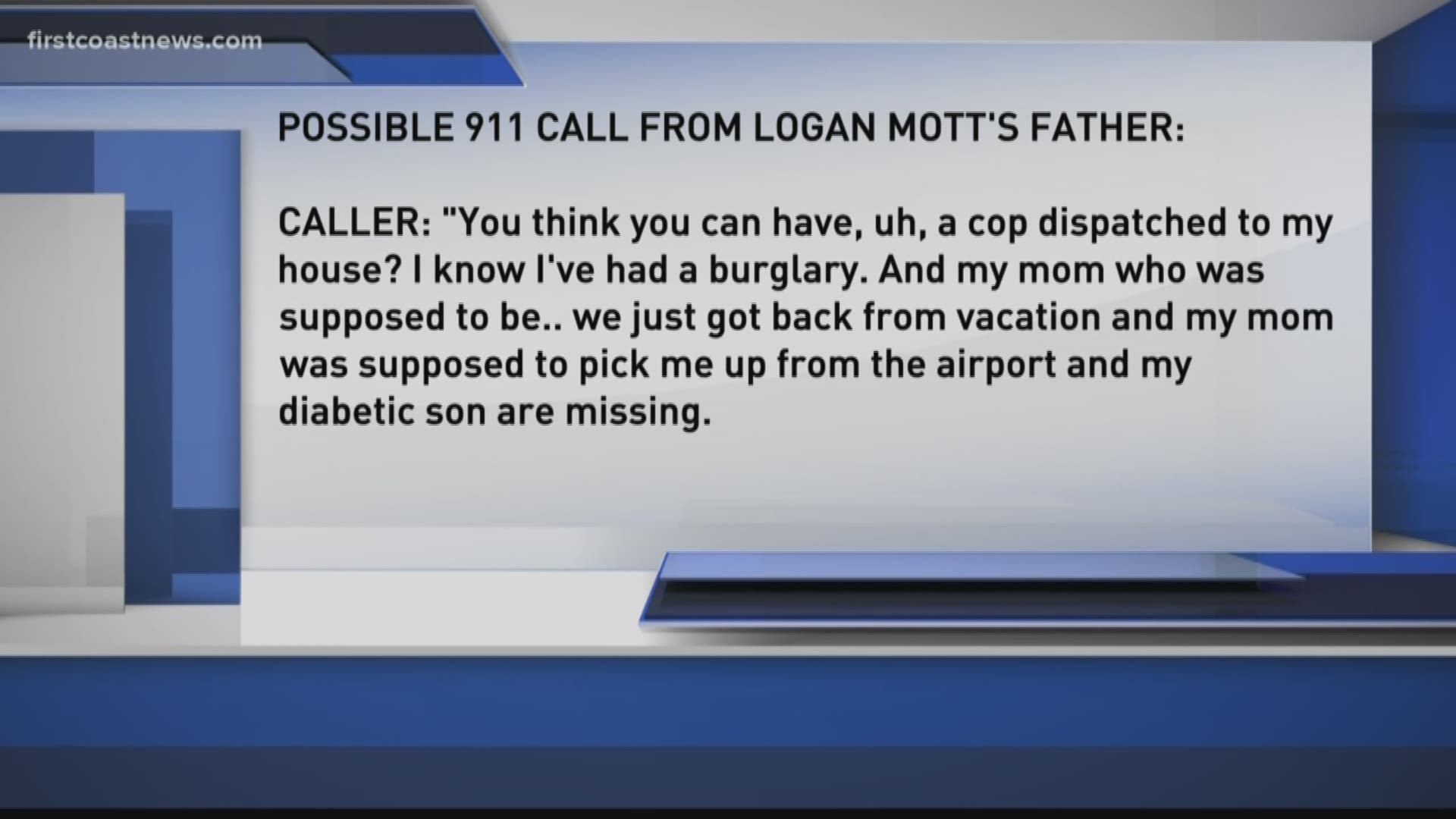 JACKSONVILLE, Fla. - First Coast News has obtained the 911 call regarding the initial disappearance of a Neptune Beach teen and his grandmother. The call was placed to the Neptune Beach Police last Wednesday.

On November 22, police received a call about the disappearance of 15-year-old Logan Mott and his grandmother, 53-year-old Kristina French. Eric Mott, Logan Mott's father and French's son, is believed to have made the call.

During the call - and stated in the police report - the caller said he last saw his son on November 11 because he went on vacation. When he returned, Logan Mott and French were supposed to pick him up at the Jacksonville International Airport, but they never showed. The caller said he got a ride back to his Seagate Avenue residence only to find that they were missing.

"I know I've had a burglary and my mom who was supposed to be, we just got back from vacation, my mom was supposed to pick me up at the airport, and my diabetic son are missing," he said to the dispatcher. "I can't get a hold of her. She's not at any one of her houses, I'm kind of at a loss."

The caller also reported that his gun safe was broken into.

"My house was open... as we're kind of looking around the house, like I just noticed my safe, like the keypad was ripped off," he said.

The caller also told dispatchers that his son's diabetic tester was in the home and that he wasn't sure if he had a spare with him.

"It's all a pretty concerning thing," he said. " ... Everything was open up and as we looked around some more, things got stranger."

Days later, the Jacksonville Sheriff's Office announced that they found French's body in a shallow grave in the backyard of the residence where they were reported missing from. She was shot and had multiple stab wounds.

Logan Mott was also detained by the U.S. Customs and Border Protection last Friday for trying to cross into Canada on the Peace Bridge near the Buffalo, N.Y. area, where he is currently being held without bond. He was found with three guns and a knife covered in what appears to be blood, police said.

On Tuesday, JSO issued a murder arrest warrant for Logan Mott in regards to French's murder.

First Coast News also learned that this wasn't the first time police were called out to the Seagate Avenue address.

In 2014, police were called out to the home by the Department of Children and Family Services (DCF) regarding a possible child abuse case, according to police reports.

The mother, who reportedly lived out of state, told DCF that the child had bruises on his buttocks, neck/throat and other areas of his body. The child's name is redacted from the report.

The child told police his father spanked him with a belt in the past, left "heavy red marks on his body" and that his dad made him do six-inch killers and run long distances until he threw up, according to the report.

The report said no further action was taken by police. It also didn't reveal who the child was or the person under investigation.

Logan Mott's next court appearance is scheduled on Friday in Buffalo, N.Y.