Police said they would be providing security for the planned protest which started at the Duval County Courthouse. 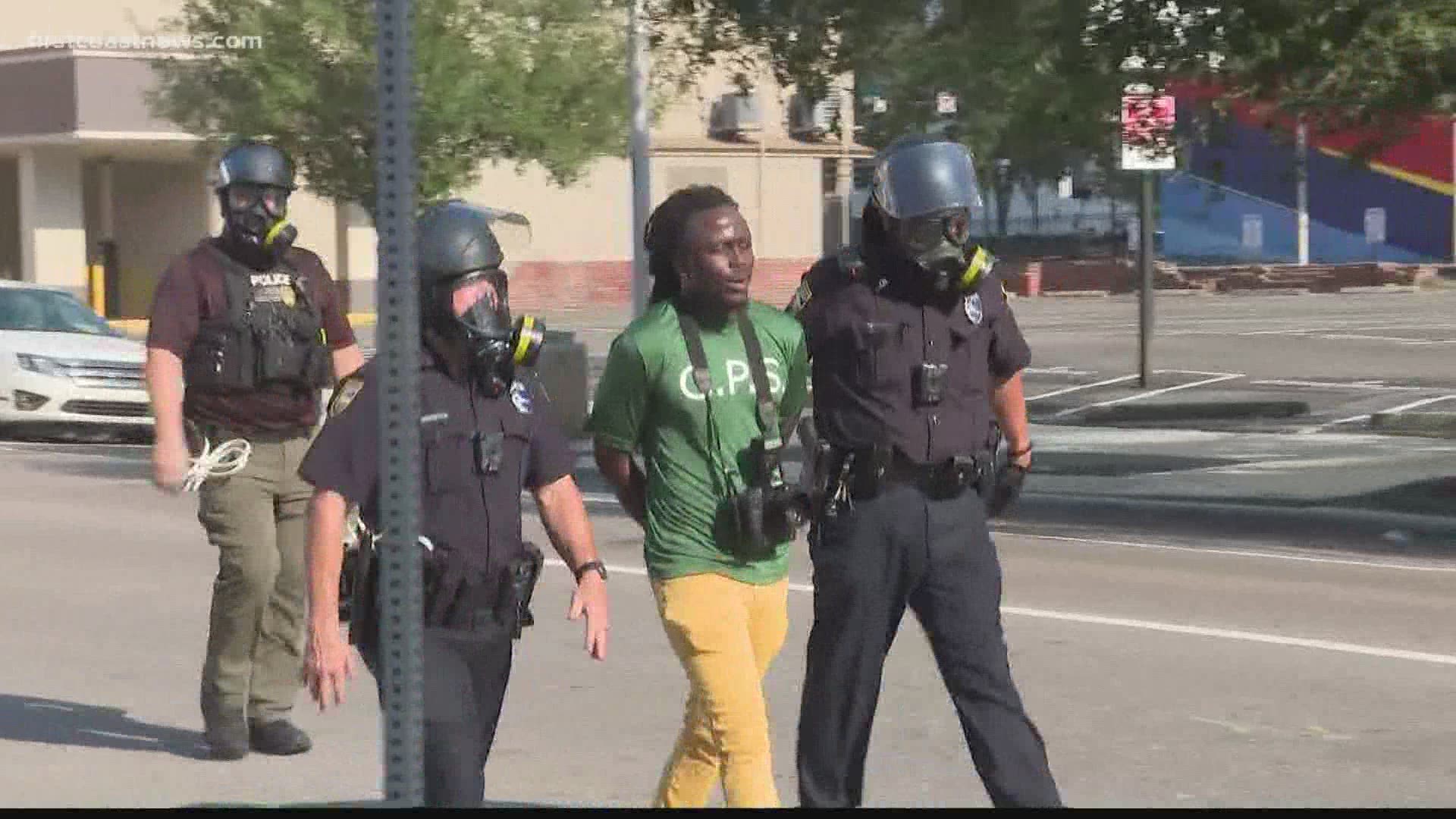 JACKSONVILLE, Fla — Dozens of people gathered Sunday afternoon at the Downtown Jacksonville courthouse for a peaceful protest against police brutality. The protest then moved onto the streets of the downtown area.

Protesters headed to Klutho Park at around 7 p.m. First Coast News was on the scene where there were about 50 protesters and 100 Jacksonville Sheriff's officers. By 8 p.m., protesters had cleared the scene.

Just before 6 p.m. at the Duval County courthouse, the Jacksonville Sheriff's Office began arresting protesters who were given the order to disperse from the lawn. At about the same time, Jacksonville Mayor Lenny Curry announced via Twitter that a city-wide curfew will be made effective at 8 p.m.

"Let me say this plainly," Curry said. "If you are in our streets after 8 p.m. you are subject to arrest by law enforcement. No one may travel upon City streets except for first responders, credentialed media, people going to/from work, individuals seeking emergency care or fleeing danger."

About an hour earlier, the Florida Times-Union reported multiple protesters were arrested after what appeared to be an attempt to shut down the Main Street Bridge.

The Times-Union said protesters who had been marching in downtown took a right on Main Street where about 100 of them got on the bridge.

Jacksonville police came out in force, using pepper spray on the protesters.

Police had two armored vehicles and dozens of police cars out using them as blockades.

At 5:30 p.m., JSO tweeted Henry J. Klutho Park at 204 West 3rd St is closed to the public and that citizens are asked to stay out of the area as police work to maintain safety downtown.

Earlier, JSO warned those not participating in Sunday's protests to avoid the Downtown Jacksonville area, according to a tweet by the sheriff's office.

Police said they would be providing security for the planned protest in the vicinity of the Duval County Courthouse. They said updates would be provided on JSO's social media platforms, the tweet said.

Community activists first gathered in Downtown Jacksonville Saturday to non-violently protest police treatment of African-Americans in the city and across the country, according to the Northside Coalition of Jacksonville.

The protest was called the Motorcade Caravan for Justice. The NCJ said the caravan is in solidarity with protests happening across the country against what activists are calling the unjust killings of black citizens at the hands of law enforcement.

Following the peaceful protest, things took a violent turn Saturday evening when a protester stabbed an officer in the neck, according to Jacksonville Sheriff Mike Williams.

After the downtown protests escalated many people were arrested and authorities warned the public to stay away from the area, Williams said.

Video submitted from a First Coast News viewer shows one protester destroying a JSO vehicle followed by tear gas being deployed. First Coast News reporter Ken Amaro was also on the scene downtown where he captured video of shattered glass and damage done to the Duval County Supervisor of Elections Office.

Jacksonville Mayor Lenny Curry praised those peacefully protesting but admonished those who he says are causing damage or attacking first responders.

The Saturday protest was just one of many happening across the country in the wake of the death George Floyd, who died after a Minneapolis police officer knelt on Floyd's neck. Floyd's death, as well as the death Ahmaud Arbery in Brunswick, Ga. and the death of Breonna Taylor in Louisville, Kentucky, have sparked concern over racial injustice in the U.S. 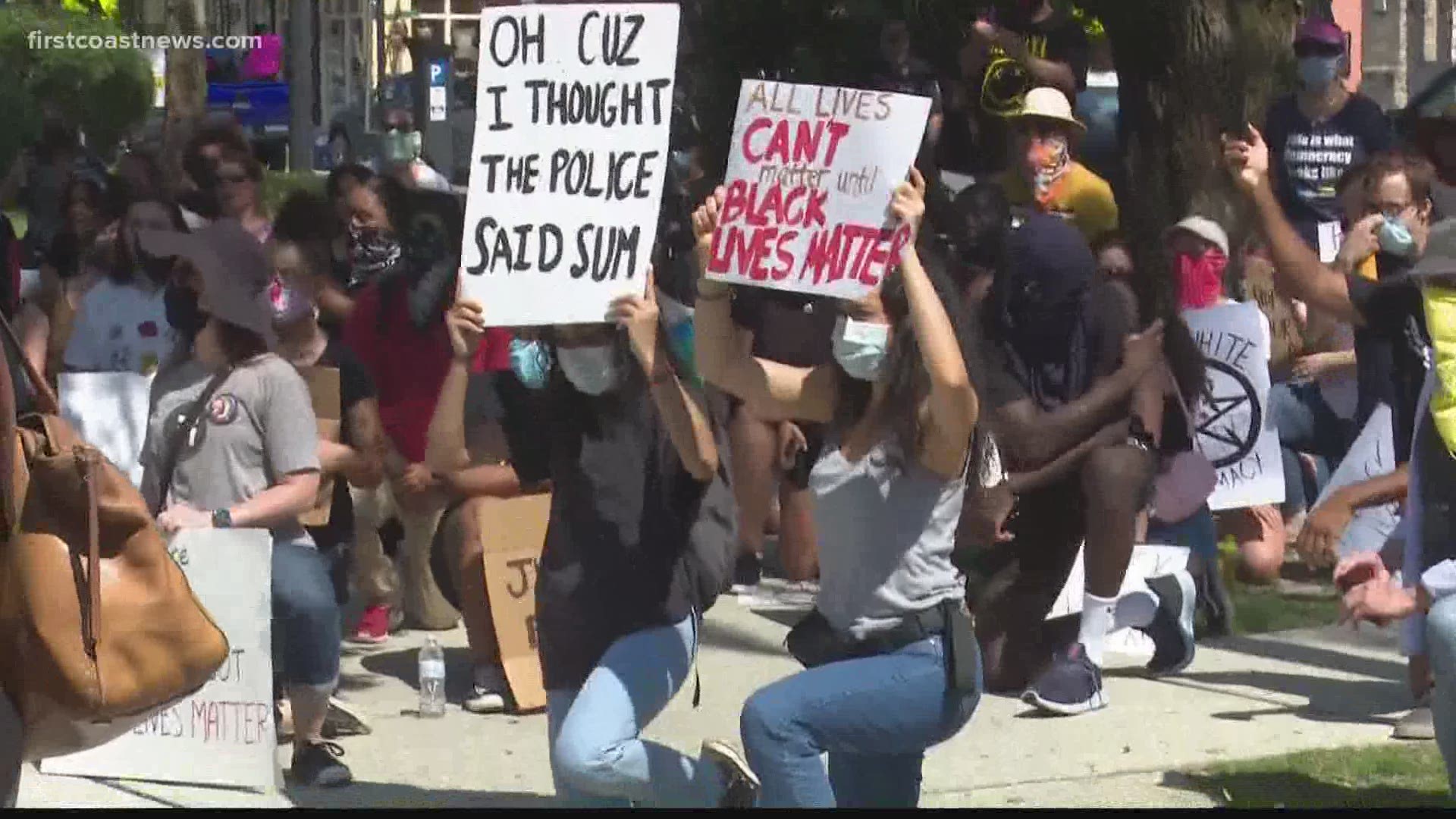 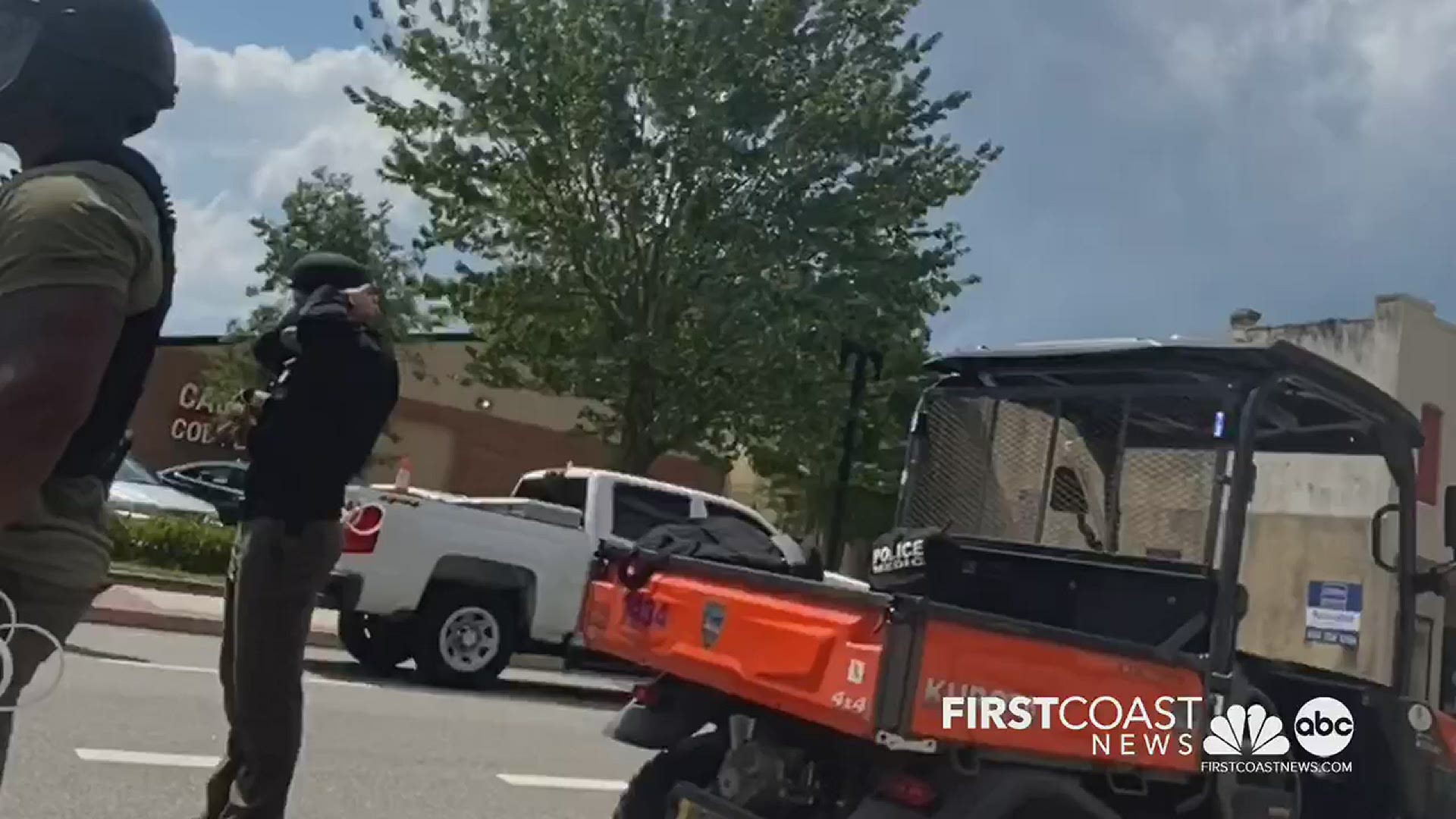 RELATED: Activists gather in Jacksonville for protest against police treatment of African-Americans in city, across country