The two off-duty firefighters left on a small boat from Port Canaveral last August to go fishing and never returned. 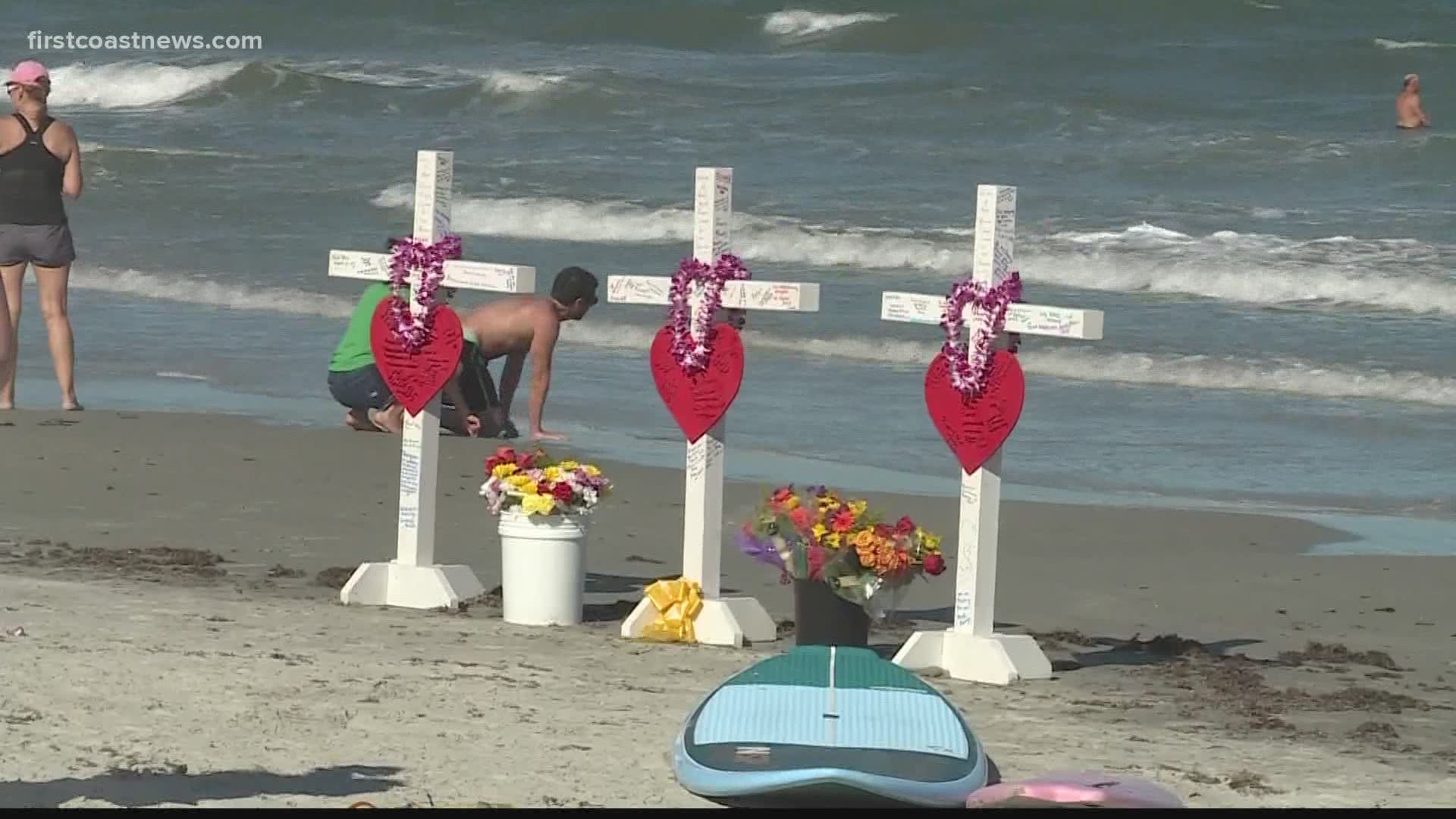 Their disappearance sparked a massive search along the East Coast that turned up few clues.

On Friday, McCluney's family and friends gathered at Jetty Park in Port Canaveral near where the men were last seen to paddle out into the water to place flowers in the ocean.

Not a day goes by that Stephanie McCluney doesn't think about her husband. He was her high school sweetheart.

The two off-duty firefighters left on a small boat for a day trip and were lost at sea.

The Coast Guard, Jacksonville Fire and Rescue Department and more than a dozen other agencies, along with hundreds of volunteers in their own boats and planes, scoured the waters from Central Florida to New England. The only sign of them was a small tackle bag found floating off the coast of St. Augustine.

Stephanie McCluney told First Coast News last year that she was 100 percent positive it was her husband’s.

“It was just a little ray of sunshine, like a little wink from God. I felt like they are out there still," she said. “It was strategically packed, all the heavy things he had taken out and zipped it right back up and dropped it in the water, just saying come get us. We are here. It gave me this great hope.”

After searching for six days, the Coast Guard made the grueling decision to call off the search.

“That was a very devastating time, but I have no doubt everything humanely possible was done, not a doubt in my mind,” Stephanie McCluney said.

One year later she continues to get messages on social media from people wanting to help.

“Can you identify this? What about this? This washed up on a beach some where Can you identify this rod, this real? There's a boat floating. Does this look like their boat?” Stephanie McCluney said. “I still deal with a lot of that. I’m so grateful that people are thinking and our eyes out there, but there have been no answers.”

She says her faith has gotten her through the past year as she, her 7-year-old son and 9-year-old daughter go through the grieving process in the middle of a pandemic.

“I will say COVID definitely threw the kids for a loop,” Stephanie McCluney said. “Any sort of a normal routine was kind of stripped from them. That seems so hard for their hearts. It was hard for mommy to watch.”

Treasuring the pictures they have together and sharing the happy memories, she knows they still have many unanswered questions.

“What if daddy is on an island somewhere. They still have that in their hearts and then the next day they'll say you know daddy's looking down on us. Daddy's our angel,” Stephanie McCluney said. “It's silly on my part, but you know I still have these visions of Brian and Justin and Tom Hanks Castaway kind of gruffy and coming to my front door.”

One year later she's no closer to knowing what happened.

"We don't you know have to have the answers. We don't need it. We just need trust, trust that He's got it. It's under His control,” Stephanie McCluney said.

This week she and three of her husband’s closest friends plan to get tattoos in his memory. Hers will have his name and scripture.

“God just picked it out for me and it says that you know he will be with us when we pass through the waters and the flames will not consume us,” Stephanie McCluney said, “It seemed to fit the circumstance of being lost at sea and it seemed to fit his passion for firefighting, so it's great comfort to me.”

As is the support from her firefighter family.

‘They're still checking in on the regular, can we cut your lawn? What can we do for you?” Stephanie McCluney said. “They are still very much a presence. We still have firefighters that drop just to say hi to the kids to say hi to me just check in and it's been beautiful.”

Now she says it's time to give back and wants to be there for others who are struggling with loss.

“If I can help someone else, it puts purpose to my pain and that's where I'm headed.”