The march was hosted by the Jacksonville Community Action Committee, the Northside Coalition and the New Florida Majority. 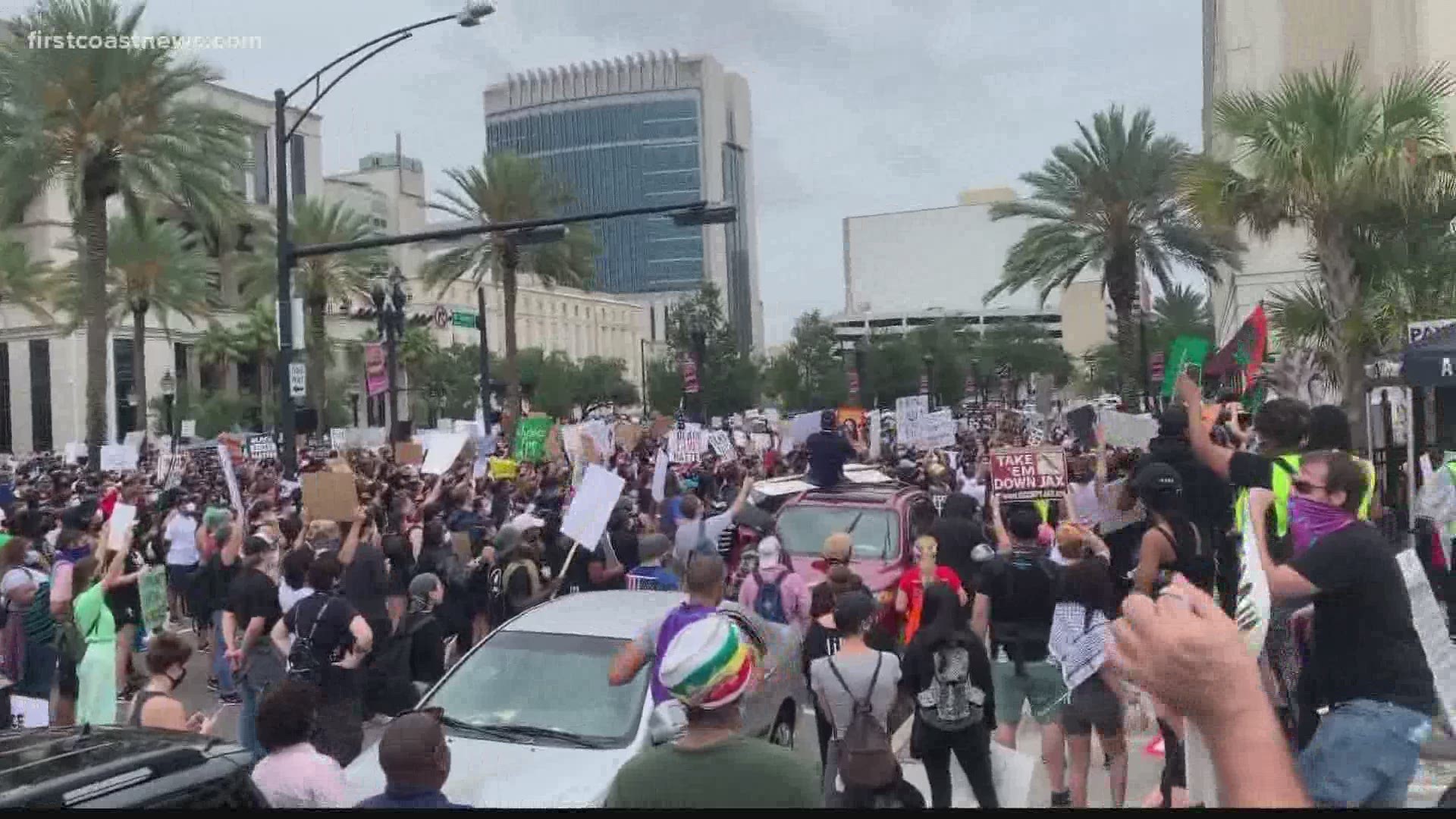 JACKSONVILLE, Fla — Thousands marched through downtown Jacksonville Saturday afternoon as part of the "Jax Take Action" protest that started in front of the Duval County Courthouse. The crowd then marched past the State Attorney's office, then back to the courthouse.

The Jacksonville Community Action Committee, the Northside Coalition and the New Florida Majority hosted the march.

The crowd of peaceful protesters had a list of demands for State Attorney Melissa Nelson. Those demands included dropping the charges against all protesters, releasing the body camera footage from officer involved shootings, "jail killer cops and standing up to JSO bullying," according to a flyer posted by the group.

"The body cam is supposed to be the all-seeing eye that would give us that quote unquote unbiased story and we just want to judge what happened for ourselves," Joshua Parks, co-founder of the Jacksonville Community Action Committee, said.

Family members of Jamee Johnson, a FAMU student who was shot and killed by Jacksonville Sheriff's officers during a traffic stop, spoke at the protest, calling for justice.

At a news conference earlier this week, Sheriff Mike Williams said there are plans to release video of an officer involved shooting from last year next week. Details of what case that’s from have not been shared, but First Coast News has been told it is not the footage from Johnson's death.

The crowd of thousands wrapped around several streets at times.

"It is a new day. It is our time. It is our season. They must listen to the voice of the people," Frazier said. “I am elated. I am happy to be a part of history, but we must never lose sight of why we came here. We demand police reform,” Frazier said.

Several marchers said the number of people walking with them gives them hope.

"It's all colors and all creeds, all ages, and that's what's making the difference," another marcher said. "This is a movement and this is time for change. We have to change."

Alecia Kirby said she was arrested at last Saturday's protest. She was back out protesting this Saturday.

"They can arrest me, but they can't silence me," Kirby said.

Mayor Lenny Curry tweeted earlier this week that he plans to participate in a walk next week, and will announce policy initiatives and actions to "address racial inequality."

In response to the mayor's tweet, organizers said, "If the mayor has a plan, we have a plan for him to accept and that includes dropping the charges, releasing the body cam footage and charging the killer cops with murder."

"We want to sit down. We want to talk to the mayor. He's trying to go around us. He still hasn't called me," Frazier said.

There was also a second march hosted by the group The Shift around four p.m. that started at the Jacksonville Sheriff's Office and ended at the courthouse. Marchers laid across part of Adams Street chanting "I can't breathe."

"George Floyd's death was the straw that broke the camel's back," the organizer of that march, Bria Core, said.

"We've been angry. This is not something new. We just came out here because we're tired of it. You're going to keep killing us? That's over with," Core said.

First Coast News reached out to JSO about any arrests Saturday June 7, but haven’t heard back yet.

Live Tweets from the Protest