More than 100 Jacksonville college and university professors sent the mayor a letter demanding more action after he announced the removal of Confederate monuments.

JACKSONVILLE, Fla — Tuesday Jacksonville Mayor Lenny Curry made the bold move and removed a Confederate monument from Hemming plaza, the first of more to come, he said.

Hours later he would participate in a peaceful protest and promised to introduced legislation addressing racial disparities.

"This is evidence of a movement for change," said John Woodward.

Dr. Woodward, faculty senate president at FSCJ, is one of the signers of the letter.

"We need to get systems that are objective and oriented toward helping communities," he said.

In their letter the educators lists four imperatives:

Woodward said some of their suggestions have been used in other municipalities successfully.

"We would like to see 'blind charging' where race is removed from the policy report that is sent to the state's attorney," said Woodward. "It removes any kind of biases one may have when it comes to prosecuting crime."

The mayor's staff told On Your Side he has received thousands of emails since Tuesday's actions.

The staffer said Curry wants to be sure every voice is heard and he will review the letter from the professors as soon as possible.

"We expect the mayor to respond to our request," he said.

You can read the full text of the letter below. 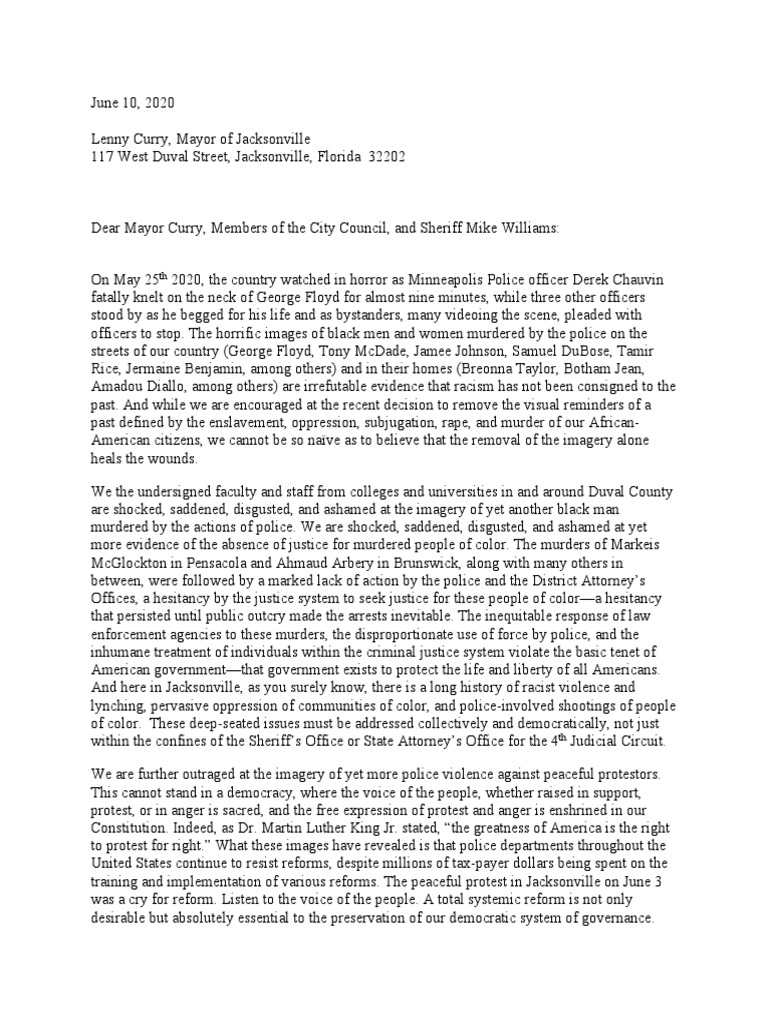 College professors write letter to Mayor Lenny Curry demanding police reform | Police | Mental Health
117 West Duval Street, Jacksonville, Florida 32202 Dear Mayor Curry, Members of the City Council, and Sheriff Mike Williams: On May 25th 2020, the country watched in horror as Minneapolis Police officer Derek Chauvinfatally knelt on the neck of George Floyd for almost nine minutes, while three other officersstood by as he begged for his life and as bystanders, many videoing the scene, pleaded withofficers to stop.

RELATED: Community activists say path to change is multifaceted but has to start