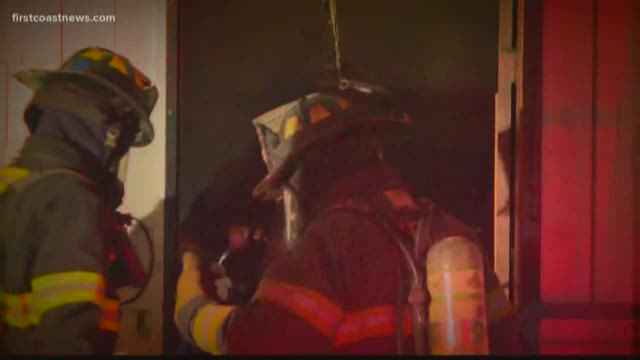 The county expects to enter an agreement to name Kingsland Fire Chief Terry Smith as the interim chief.

First Coast News first began reporting on issues with equipment at the fire department in 2016.

The county says Mark Crews is resigning on his own accord, despite continued issues dating back to 2016.

Both former and current firefighters talked with First Coast News and voice their concerns on what’s been troubling them over the years and say things haven’t improved over the last year.

“We can’t see work orders whether they’re being addressed or not and it’s just like the communication has been completely lost,” one active firefighter said.

Current Camden County Firefighters tell me up until about a year ago, they used to log into a website where they could report and view work orders for equipment. However, they say that system is no longer used.

“Don’t know where they go or what happens to them, you used to be able to see that,” another firefighter said.

The firefighters, who want to remain anonymous, hope to see change under new leadership as they tell me, they’re still battling equipment issues.

“We have a brand new fire engine that we just purchased, we have to keep it plugged into an air compressor," one firefighter said.

"If it’s not plugged into an air compressor all the air that has been build up in the air brakes have completely diminished."

"It should have an onboard air compressor that retains the air that was previously in it before the truck starts up.”

Not having an onboard compressor means it takes the truck longer to leave the station.

Mark Crews told us in a statement, his leadership has been under intense public scrutiny and pressure.

Mainly from a small group of former employees. He adds that efforts from hardworking firefighters should not be undermined by questions about their chief.

His full statement can be viewed below.

Moving forward the interim chief’s role will include developing emergency response protocols and coordinating training activities according to this written agreement.

Training is something that firefighters say has been an issue.

“I’ve actually been on shift with a guy who had one day on the job and he was pulling overtime shifts, It’s a huge problem because if a call goes out and I request

something of the truck and it is his job to know exactly what it is. The matter of seconds it takes to know what I’m talking about to get it to me could save somebodies life or even my own.”

The city of Kingsland is expected to approve Terry Smith as the Interim Chief, then Camden County has sign off before the replacement becomes official.

For nearly a year, my leadership Camden County Fire Rescue has been under intense public scrutiny by a small, but vocal group of former county employees.

While their claims are a perversion of the truth, the hardworking firefighters and paramedics that keep Camden County safe deserve to be recognized for their

heroic contributions to the community, not undermined by questions about their chief.

The past several months have been extremely trying on both my personal and professional families; and it has become clear that my leadership at Camden County

Fire Rescue has become a distraction. Accordingly, I intend to resign as fire chief.

I have always believed that public service is a noble pursuit, and I trust the people of Camden know that the politics of character assassination and ad hominem attacks

do not improve public welfare, they simply make it harder to find good people willing to sacrifice themselves for the greater good.

I wish the next Chief of Camden County Fire Rescue well. You are blessed with an incredibly talented and motivated group of firefighters.

I regret to inform you that I am resigning from my position as Chief of Camden County Fire Rescue.

I feel that my leadership has become a distraction to the great work this department does.

Thank you for the support that you have provided me during the last several years. I truly appreciated the professionalism you display each and every day to the citizens and visitors to Camden County.

If I can be of any assistance in the future, please let me know.